Do Democrats have an EV messaging problem? 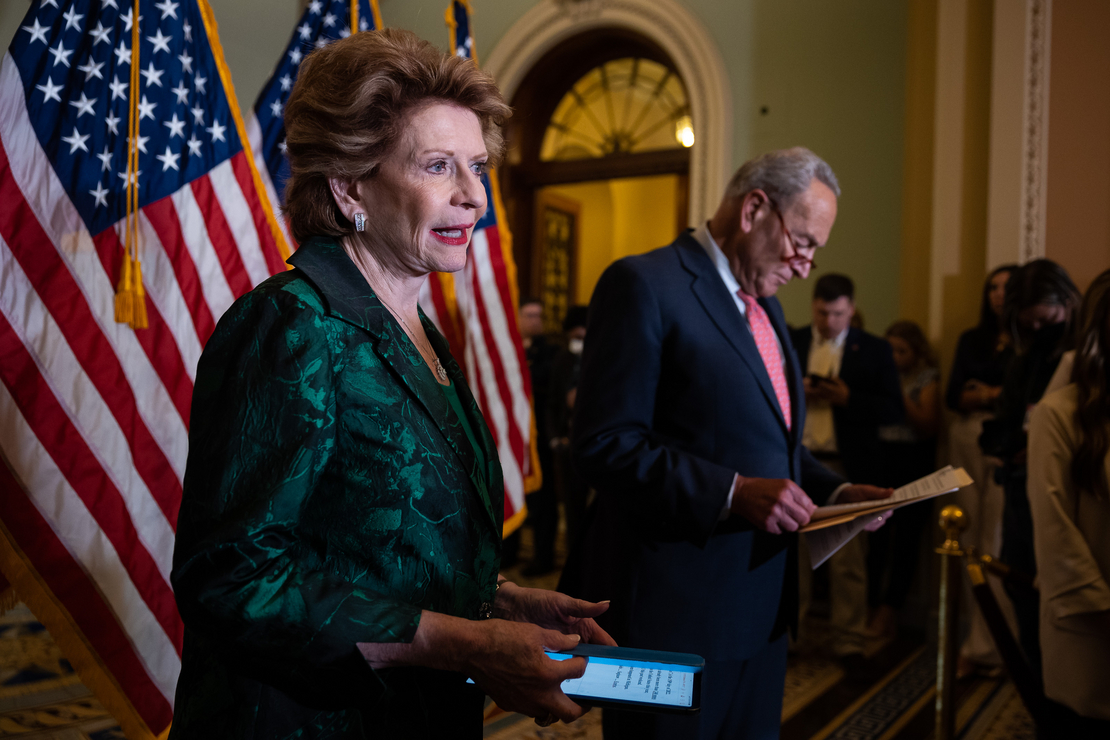 Michigan Democratic Sen. Debbie Stabenow this week said owning an electric vehicle has insulated her from rising gas prices, which immediately drew the ire of Republican lawmakers and right-wing commentators who accused “elite” Democrats of being out of touch with the reality of everyday Americans.

And in recent weeks, both Transportation Secretary Pete Buttigieg and Vice President Kamala Harris have gotten similar pushback as they touted the administration’s EV spending, amid soaring gas prices. President Joe Biden’s $1.2 trillion infrastructure law allocated up to $7.5 billion to build out a national network of electric vehicle charging ports.

“I get that House and Senate Democrats want to be seen as promoting electric vehicles, but the reality is that most Americans are struggling to figure out how to pay for their gas right now,” said Jim Manley, a Democratic strategist and former staffer to Senate Majority Leader Harry Reid (D-Nev.). “They’re really not interested in hearing lawmakers wax poetically about how they love their EVs.”

A recent survey conducted by Lincoln Park Strategies found that, among a list of seven federal funding priorities, increased funding for electric vehicles came in last. The survey also found that that 64 percent of respondents said they’d either be “not very likely” or “unlikely” to buy an EV in the next five years.

Writing in The Hill in April, the president and founder of Lincoln Park Strategies, Stefan Hankin, said that the results “paint a clear picture that Democrats should be wary of pushing voters too hard regarding EVs or offering EVs as a solution for high gas prices.”

During a Senate Finance Committee hearing this week, Stabenow referenced her drive from Michigan to Washington in her recently purchased Chevy Bolt EUV, a General Motors Co. electric model.

“Went by every single gas station, and it didn’t matter how high it was,” she said, adding that she’s looking forward to a future when vehicles “aren’t dependent on the whims of the oil companies.”

The comment, meant to highlight one of the benefits of zero-emission cars and trucks, was assailed by Republican lawmakers and right-wing commentators, who said it showed a lack of awareness of how many Americans are faring right now.

‘She will never apologize’

After weeks of rising gas prices, yesterday’s average hit $4.955, according to AAA. A number of states saw average prices far exceed $5 per gallon. In California, for example, the average price climbed to $6.39 yesterday.

“If [Michigan] voters & everyday Americans needed further proof [at] how out of touch & elitist these electric limousine liberals are, just listen to Democrat Sen. Stabenow brag about not having to pay for gas while millions of Americans suffer in this #BidenGasHike,” Republican strategist Paris Dennard wrote on Twitter.

Rep. Mike Kelly (R-Pa.) joined in on Twitter criticizing Stabenow for her comments, noting that the average price of an electric vehicle is $60,000 while the median income of his constituents is $54,627.

GM recently slashed the price of the Bolt EUV, the car Stabenow owns: The LT trim version of the vehicle now starts at $28,195 and the Premier trim now starts at $32,695.

Robyn Bryan, a spokesperson for Stabenow, slammed the critics, saying they owe Michigan autoworkers an apology for “disrespecting” their products.

“Every day, Senator Stabenow stands up for our hardworking Michigan autoworkers — the best in the world. She will never apologize for driving a Michigan-made vehicle built by the talented workers at GM’s plant in Lake Orion,” she told E&E News. “Instead of helping the oil companies line their pockets with Michigan drivers’ hard-earned money, these critics should join the senator’s fight to end price gouging at the pump.”

“I don’t think we’re going to be watching this clip over and over for years to come,” he said. “But it does underscore how we talk about these issues.”

The administration said it will release guidance today on how states can spend $7.5 billion Congress appropriated for electric vehicle infrastructure in the bipartisan infrastructure law.

Paul Bledsoe, a strategic adviser at the Progressive Policy Institute, said Republican lawmakers are the ones “being elitist” by denying U.S. drivers EV tax breaks.

“So in my view, it’s the Republicans who are being elitist by consigning Americans to continue to get gouged for gasoline when they could be buying EVs,” he said.

President Joe Biden’s imperiled “Build Back Better Act” would have allocated up to $12,500 for electric automobiles made in the United States by a unionized workforce and $7,500 in incentives for ones made by nonunionized shops.

The union provision became one of the major sticking points that helped tank the $1.7 trillion spending bill last year. Car companies such as Toyota Motor Corp. and Tesla Inc., whose workers are not unionized, slammed the legislation as discriminatory.

And swing-vote moderate Sen. Joe Manchin (D-W.Va.), whose state is home to a Toyota manufacturing plant, said he could not support the provision, cementing the impasse.

Democrats are increasingly optimistic about the prospects of a revived reconciliation package, but expanding the electric vehicle tax credit is on shakier ground as Manchin, the Energy and Natural Resources Committee Chair, has continued to express skepticism (Climatewire, April 29).

“When people are staring at $5-a-gallon gas, talking about the need for increasing production of electric vehicles — which is, I would argue, the 100 percent correct long-term solution — does not solve the immediate problem of spending $100 every time you drive up to the gas station,” he said.