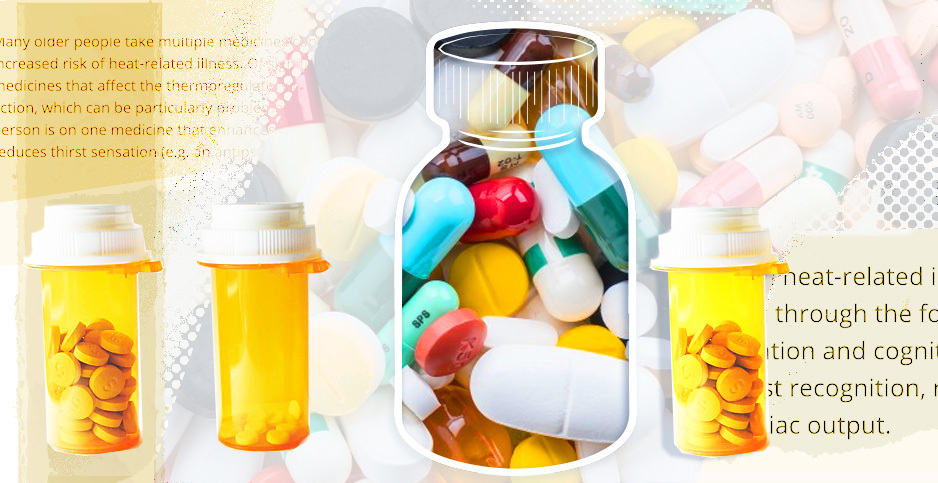 As a heat wave blanketed Boston last summer, an elderly woman called 911 saying her husband was disoriented. Found in a high rise with no air conditioning, the man was diagnosed with heat stroke soon after paramedics brought him into the emergency room. His body temperature was 106 degrees.

His living conditions were obviously to blame, but, doctors wondered, why didn’t his wife suffer the same fate?

One possible answer: heat-induced complications with his blood pressure medicine, which can cause dehydration.

"It’s like if you see someone who has been smoking for 50 years and develops lung cancer, you can’t say definitively that the smoking caused the cancer but you know it surely contributed to it," says Dr. Renee Salas, who treated the man at Massachusetts General Hospital’s emergency room. "In this case, I have a fair degree of certainty that his medications contributed to his developing a severe complication."

Salas is one of a small but growing number of doctors who warn that physicians need to pay more attention to the drugs they prescribe as climate change fuels more severe and frequent changes in temperature. Doctors, they say, should be making more of an effort to warn patients to keep cool before prescribing them certain medications.

It’s not just blood pressure medicines doctors like Salas are worried about. Drugs that reduce fluid retention can also cause dehydration. Beta blockers taken for heart rhythm disorders can decrease the amount of blood flowing to the skin, making it more difficult for bodies to cool down. Antipsychotics can impair the body’s ability to sweat.

Doctors are already trained to warn patients about drugs’ adverse side effects. But those are often considered acute problems, like dizziness or vomiting — not a chronic inability to react to certain temperatures.

That needs to change, says Dr. Aaron Bernstein, director of the Center for Climate, Health and the Global Environment at Harvard University.

"If I was a fisherman who liked being out on a boat during the summer, I would like to know that my enjoyment of that thing might be affected by this drug," he said.

Bernstein is quick to say there needs to be more research into how much these drugs are to blame for heat-related illnesses and death versus other factors that could be at play.

"We know people die, and we know people are dying of the heat with preexisting medical conditions," he said. "But we don’t know how much of that is due to the impact of their drugs, versus their age or medical diagnosis."

But he and Salas also say doctors should be considering climate change-fueled heat waves when they have patients they need to medicate for the first time.

It would be particularly important to warn patients about heat waves if they begin taking a new drug in the spring or summer, when a heat wave could hit before their body has a chance to acclimate to the season, they say.

"It makes sense to tell a patient to be mindful of heat to avoid a double whammy where they have both a disease and a drug that increases their vulnerability to heat," Bernstein said. "The guidance is very reasonable and doesn’t cost anything — it’s stay cool and hydrate."

“It makes sense to tell a patient to be mindful of heat to avoid a double whammy where they have both a disease and a drug that increases their vulnerability to heat.”

That’s an idea supported by Australian researchers, who in 2015 published a paper in the Journal of Clinical Pharmacy and Therapeutics about drugs that can affect the body’s thermoregulatory response.

It outlined how elderly people are more at risk of heat-related illness because they are already prone to dehydration as aging impairs kidney function, decreases total body water and reduces the "thirst sensation." Elderly people also often have a reduced ability to sweat, reduced cardiac output and decreased blood flow to the skin — all issues that could be exacerbated if they are prescribed medicines that further impair those abilities.

The paper also found that mentally ill patients are especially vulnerable. Not only do psychotropic medicines impair the body’s ability to respond to heat, but people prescribed those drugs may be less able to respond to heat if their illness affects behavior.

The paper recommended warning patients about the impacts their medications could have during a heat wave, and even went so far as to recommend doctors delay initiating or increasing the doses of psychotropic medicines during heat waves when possible.

Dr. Elizabeth Haase, a psychiatrist in Carson City, Nev., who founded the Climate Psychiatry Alliance, agreed it is important to warn patients about how heat can affect their medications.

Patients with schizophrenia, she said, are particularly vulnerable, with hospitalizations increasing during warm weather.

That’s because people suffering from schizophrenia already have more difficulty regulating body temperature, with common medications used to treat the illness also causing hyperthermia on top of that.

More generally, many medicines meant to treat mental illness, she said, "act on the systems that regulate the body, consciousness, heart rate and blood pressure to shift your response to the environment, behaviorally and physically."

For example, antidepressants like selective serotonin reuptake inhibitors work by increasing the levels of the "feel good" serotonin hormone in the brain. But serotonin also increases sweat production, which can lead to dehydration in hot weather. Another antidepressive treatment — lithium — could prove toxic if a patient becomes too dehydrated and the concentration of lithium in the blood rises.

As for patients with physical illnesses, Haase said the key is to ensure her patients know the risks and impacts of the medicines they are taking.

"You have to make sure that they know so they can carry a fan with them, or stay inside, and not let themselves get to the point of being overheated," she said.