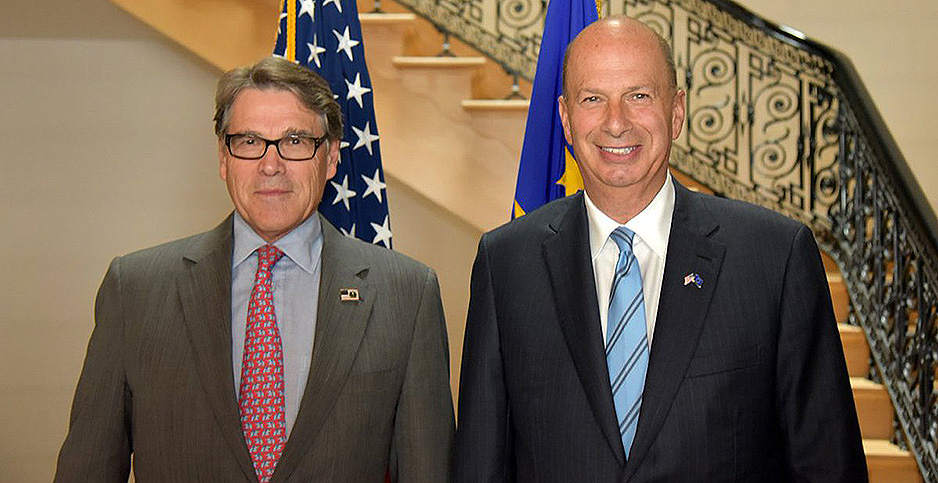 Along with Perry, the trio were referred to as the "three amigos" who were charged with unofficially overseeing shifting U.S. policy toward Ukraine after Trump became disillusioned with a new Ukrainian president in May.

"I believe Secretary Perry was the first one because he knew him well," Sondland testified when asked who in the trio first contacted Giuliani after being directed to do so by Trump. The former New York City mayor is seen as central to pushing the new strategy.

In the testimony, Perry emerges as having a larger role than previously known in the unfolding investigation into whether Trump held up $400 million aid to Ukraine to force its new leader to commit to pursuing an anti-corruption effort.

The Energy secretary is portrayed as having a relationship with Giuliani, talking with Sondland about and ahead of the diplomat’s closed-door testimony, and participating in several phone calls and meetings related to Ukraine strategy that House investigators have zeroed in on.

Perry, who will leave the Cabinet early next month, has so far declined to take part in what he has dismissed as an "illegal inquiry." The details revealed yesterday are only likely to increase calls from Democrats that he answer their questions.

Sondland also acknowledged for the first time yesterday, in revisions to his testimony, that the diplomat himself told Ukraine officials the aid would not be released until the nation launched the anti-corruption probe sought by Trump.

The investigation was expected to target a Ukrainian energy company, Burisma Holdings Ltd., that employed the son of political rival Joe Biden and is at the heart of the impeachment inquiry.

Department of Energy press secretary Shaylyn Hynes stated: "Secretary Perry stands by his previous statements with regard to Ukraine. Dating back to 2017, his anti-corruption and regional energy security message has been consistent from President [Petro] Poroshenko to President Zelenskyy. As previously stated, if the Congress passes a resolution providing for an open and transparent process — one that includes the participation of executive branch counsel — then the Secretary would consider an invitation to appear."

‘I was pretty frustrated’

Sondland said Perry "volunteered to make the first outreach" to Giuliani because he was the "most familiar" with the former New York City mayor. Perry last month told The Wall Street Journal that he had contacted Giuliani in an effort to set up a meeting between Trump and his new Ukrainian counterpart.

Sondland said the "three amigos" were not enthusiastic about talking to Giuliani: "We would have all preferred to have the State Department handle this whole matter and not involve people outside of the State Department, because you don’t know what they’re doing."

Perry first became enmeshed in the inquiry because he was sent to Ukrainian President Volodymyr Zelenskiy’s inauguration in May instead of Vice President Mike Pence at Trump’s request, according to a whistleblower complaint that touched off the House investigation.

In the testimony, Sondland said the three were dejected after meeting at the White House with Trump after Zelenskiy’s inauguration, as the U.S. president shot down their optimism about working with Zelenskiy.

"We wanted to share that excitement with the president, and he didn’t want to hear about it," Sondland said. "So I was pretty frustrated. I was kind of pissed, actually."

Perry has denied any wrongdoing tied to meetings with Ukrainian officials, arguing that he traveled there frequently to promote U.S. natural gas exports.

Sondland did not recall a subsequent call with Zelenskiy, Volker, acting U.S. Ambassador to Ukraine William Taylor and Perry on June 28, but he did recall "negotiating a public statement to get Burisma, [the] 2016 [election] … language that was being proposed by Giuliani."

Sondland repeatedly insisted that he didn’t know Giuliani was interested in discovering compromising details on Biden until late in the game, despite Giuliani’s tweets and interviews that made it clear he was interested in investigating Biden.

He said he only later began to hear about Burisma and Biden through Volker; Perry; and Perry’s chief of staff, Brian McCormack, who Sondland noted was "heavily involved."

McCormack, who left DOE in September to work on energy issues for the Office of Management and Budget, is named alongside Perry as being involved at a July White House meeting where former national security adviser John Bolton became enraged over the back-channel work on Ukraine policy.

Like Perry, McCormack has refused to participate in the inquiry.

Sondland said he didn’t believe it was inappropriate to consult with Perry — another potential witness — ahead of his testimony before House investigators.

He acknowledged he asked Perry to "refresh" his memory, particularly of the July meeting at the White House with Bolton where Trump’s former top Russia adviser, Fiona Hill, reportedly walked in and told Sondland that his statements about Biden and Burisma were inappropriate.

Sondland said he read that Hill had described a "bad" meeting at the White House and that her description was at odds with his recollection, so he talked to Perry.

"It was so contrary to any recollection I had, I thought I must have slept through something and missed something," Sondland said. In his telling, Sondland said it was a "great meeting and we all left happy."

Indeed, he said, "we all tweeted about it afterwards." Sondland also described himself and Perry as friends "who talk a lot about a lot of things."

He asked Sondland whether he agreed that Perry’s "primary focus" in the situation had been "making sure that our national security interests were being promoted with respect to natural gas, coal."

Sondland replied, "Yes," adding that "my impression of the Ukrainians [was that] they were very impressed to have a Cabinet-level member to take such a strong interest in the country."

Sondland also testified that he was at Perry’s office "on a number of occasions" for matters both related and unrelated to Ukraine, "because we work very closely on European energy together." He said Perry "was focused on energy considerations all over Europe."

Perry has rejected reports that he pressed Naftogaz to change its board, but a series of June texts between Volker and Taylor states that Perry "wants two senior US energy industry people on an expanded board."

Asked by Taylor how he, Sondland and Perry view Kobolyev, Volker said Perry is "the most negative," adding that he "sees him as obstructing both the upstream and opening up of the market."

A nickname and ‘less evidence’

Volker made far fewer references to Perry in his testimony and said he had not dealt with him much until he accompanied him to the Ukrainian inaugural.

"I had known him years past, but nothing concerning Ukraine in a contemporary time space until we went there together," said Volker, who added that Perry seemed "happy" to lead the delegation, given ongoing energy issues in Ukraine.

Sondland also provided the origin for the "three amigos," the moniker given to him, Perry and Volker: "We were all in Kyiv together, and someone walked up to us and said, ‘You look like the three amigos,’ we were all standing together, and I think that’s where it came from," Sondland said.

"I can attest to that," quipped House Intelligence Chairman Adam Schiff (D-Calif.), whom Trump has nicknamed "Shifty Schiff."

News of Perry’s long-expected resignation from the Cabinet broke as Sondland was testifying in the secure room at the Capitol.

"I didn’t know that. I haven’t had any phone access," Sondland said as Rep. Harley Rouda (D-Calif.) told him of Perry’s pending departure.

"We are scheduled to meet on Sunday in Brussels for an energy conference," a surprised Sondland added. "So, all news to me."

The White House, meanwhile, dismissed the latest transcripts as showing "less evidence for this illegitimate impeachment sham than previously thought."

Senate Majority Leader Mitch McConnell (R-Ky.) also said yesterday he’s not expecting the Senate to remove Trump from office if the House impeaches him and warned Democrats that a lengthy trial could interfere with their presidential primaries.

"I’m pretty sure how it’s likely to end. If it were today, I don’t think there’s any question it would not lead to a removal," McConnell told reporters. "So the question is, how long does the Senate want to take; how long do the presidential candidates want to be here on the floor instead of Iowa and New Hampshire?"