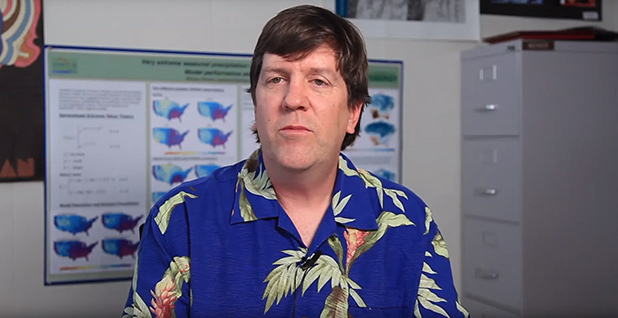 Federal scientist Michael Wehner is digging into the link between human-caused climate change and Hurricanes Irma and Harvey. Berkeley Lab

While the Trump administration has stayed silent on potential links between climate change and strong hurricanes, federal research on the issues is churning along.

Michael Wehner, a senior staff scientist at the Lawrence Berkeley National Laboratory, is using new methodology to assess the role of climate change in Hurricanes Harvey and Irma.

A researcher at the Energy Department lab’s Computational Research Division in Berkeley, Calif., Wehner said he’ll be "hindcasting" to analyze the two recent hurricanes using "Cori," the world’s sixth fastest supercomputer, named for Gerty Cori, who in 1943 became the first American woman to win a Nobel Prize for science.

Wehner said he and his colleagues will attempt to make a forecast of Irma, which blasted over the weekend through the Caribbean and Florida, then tweak the simulation using factors like sea surface temperatures to "represent the effects of human climate change at the start of the simulation."

"We simulate the hurricane as it was and then as it might have been had climate change not been a factor or not occurred using forecast models," Wehner said.

"That’s a pretty big kick to the system," he said. "And for some storms, if you kick the system that hard, it no longer behaves like it did in reality."

Axios first reported today Wehner was studying the role of climate change and recent extreme weather events, including the wildfires.

The approach is drawn from a paper published by Wehner and his colleagues in July in the journal Weather and Climate Extremes, which studied an eight-day storm that hit Colorado in 2013, triggering severe flooding along the Platte River that led to nine deaths and hundreds of evacuations. Those models were also run on supercomputers at Berkeley.

Ultimately, Wehner said, he and his colleagues will write a paper that will be peer-reviewed and possibly appear in journals — a process that’s playing out at other agencies as scientists analyze the causes of severe storms.

"Others read it and critique it and tell us what they think, whether or not they think we were right or wrong," he said. "This is an ongoing research field, not without controversy."

Wehner is one of many scientists crunching the numbers in the wake of Harvey and Irma.

Jim Kossin, an atmospheric research scientist at NOAA’s National Centers for Environmental Information, said there are a number of NOAA and NASA scientists as well as nongovernmental researchers working on the question of how climate affects hurricanes.

The Trump administration has questioned climate science and is reshuffling top climate slots at agencies like the State Department, but not everyone is feeling the pinch, and the final results are in congressional hands.

Kossin said he couldn’t speak for other agencies’ climate work, but "for me it’s been fairly business as usual."

While the administration has disbanded one NOAA climate advisory panel, an agency spokesman said climate research is ongoing. President Trump has yet to nominate a NOAA administrator, but he has nominated Timothy Gallaudet, a 32-year Navy veteran, for the agency’s No. 2 post.

Trump has proposed cutting a number of key NOAA programs, but lawmakers seem hesitant to oblige.

Kossin said he does fret about money.

"Any loss of funding," he said, "will impact how much research is done."