Does a crackdown on Russian gas help or hurt the climate? 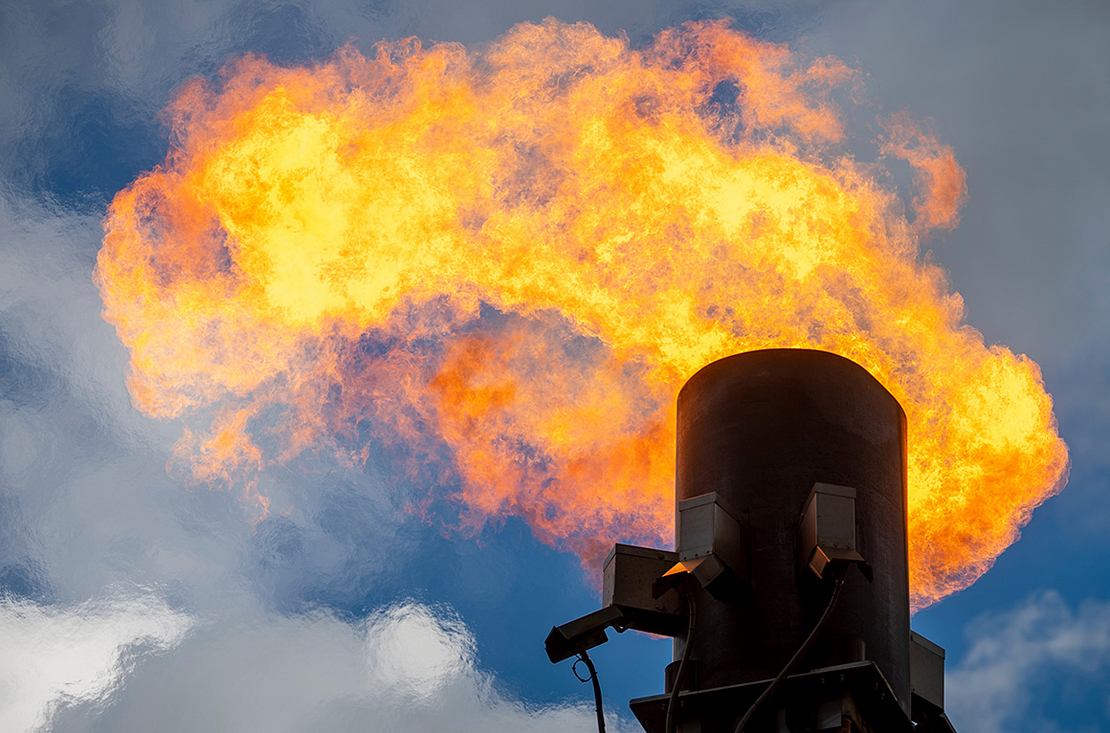 Gas is burned off at a mobile flare system at the station of a long-distance pipeline operator in Germany. Hendrik Schmidt/picture-alliance/dpa/AP Images

President Joe Biden’s efforts to ramp up U.S. natural gas exports have sparked a debate over whether the administration is betraying its climate goals or advancing them in a new way.

The debate comes as the Western world scrambles to wean itself from the oil and gas supplies that have funded Russia’s invasion and bombardment of Ukraine. Before the war, which began in late February, Europe depended on Russia for about a quarter of its oil and more than a third of its natural gas.

Now, Europe is looking for another source of energy. The oil and gas industry, along with some climate watchers, argues that this presents an opportunity: U.S. natural gas can be used to phase out its dirtier Russian counterpart.

“There’s a huge climate benefit,” said Paul Bledsoe, a strategic adviser with the Progressive Policy Institute and a former Clinton administration climate official. “It’s critical for us to be able to point out that U.S. gas is the cleanest in the world.”

His view reflects a realpolitik approach to climate policy: that it’s naive to think the world will ditch fossil fuels as quickly as scientists say it should. So, better to choose fossil fuels less damaging to the climate as a complement to the shift to renewable and hydrogen power.

Renewable advocates say that approach has its own naive assumption: that replacing Russian production with U.S. gas would cut or end its methane emissions. They also don’t buy the idea that gas produced in the United States is all that much cleaner than in Russia, so they don’t see producing more of it here as helpful.

“I think it’s plausible — not definite, but plausible — that we could wind up with a situation where U.S. methane leakage goes up more than Russia’s goes down,” said Clark Williams-Derry, energy finance analyst at the Institute for Energy Economics and Financial Analysis (IEEFA), which advocates for speeding up the transition to sustainable energy.

The European Union announced a plan last week to phase out imports of Russian oil, as part of its latest sanctions package. The plan calls for most E.U. countries to stop importing Russian crude oil within six months and refined products by the end of the year (Climatewire, May 5).

Ukraine joined the gas supply fight this week. The country’s pipeline operator said it has refused to ship to Europe gas from areas of the country under Russian control.

Europe was already facing energy shortages before the announcement. Russian President Vladimir Putin has cut off gas shipments to Poland and Bulgaria, and Russian gas exports to Europe have declined in the past month. Norway has picked up some of the slack, increasing flows to the rest of Europe by 17 percent in the past week, according to Oslo-based Rystad Energy.

The U.S. oil and gas industry and its political supporters have cast its liquefied natural gas as the solution to Europe’s supply problems, or at least a big part of it. Gas exporters are offering to expand if European governments and industry will commit to purchasing its LNG for years to come (Energywire, March 9).

The Biden administration has gone along to a point, pushing out approvals for more LNG exports and urging increased production (Energywire, April 28). The European Union and the United States announced in March that they would work together to reduce E.U.’s demand for Russian gas by as much as two-thirds, with the United States making up the remaining one-third by eventually supplying up to 50 billion cubic meters a year of natural gas (Energywire, March 25).

But ramping up exports could mean more terminals, more pipelines and more drilling or “fracking” across the United States. That’s likely to draw opposition from community groups opposed to industrialization, environmentalists who say oil and gas production generates dangerous pollution, and climate leaders who say that more fossil fuel infrastructure is incompatible with hitting the world’s emissions reduction targets.

The Biden administration stresses that it still wants to meet climate goals while providing Europe with gas. Some environmentalists say it can’t do both.

“Switching from heroin to OxyContin is not going to help an addict,” said Jim Walsh, policy director at the environmental group Food & Water Watch, referring to the addictive medicine for severe pain. “We need to transition off this easily manipulated commodity.”

Bledsoe, though, considers it hypocritical to ignore that Russian gas production is more damaging.

“Critics of LNG on the left are pretending that Russian natural gas is somehow good for the climate,” he said. In Russia, he said, “they have no regulations, no enforcement, no monitoring.”

By most measures, U.S. gas production emits less methane than Russia’s. In 2020, Russia’s oil and gas industry led the world in methane emissions, according to the International Energy Agency.

The short-lived, but potent, greenhouse gas traps 80 times more heat in the atmosphere than carbon dioxide in the first 20 years after it is released. That makes reducing it particularly important, as scientists say the Earth is heading for a tipping point in just a few years. A landmark report last year found the window for limiting temperature rise to dangerous levels has nearly closed and some changes are already irreversible (Climatewire, Aug. 9, 2021).

A 2019 study by the Department of Energy laid out Russia’s track record. It found that gas delivered by pipeline from Russia to Europe has 40 percent more global warming potential than LNG from the U.S. Gulf Coast across 20 years. Russian gas also has 20 percent more global warming potential than European coal, it found. And DOE calculated that about 4 percent of the gas leaks when piped from Russian wells to European plants; that leak rate is 1 percent for gas from U.S. wells that is shipped to Europe.

The difference could be far greater. Because of a lack of data, DOE used U.S. industry performance as a proxy to represent Russian gas production and transport. Experts don’t really know how much methane Russia’s aging infrastructure emits.

But Russia is not alone in reporting fuzzy numbers. An IEA report earlier this year used data from satellites to estimate countries’ emissions — and found that countries all over the globe are massively under-reporting their methane emissions from energy production (Energywire, Feb. 23).

While countries in North America reported only about two-thirds of their actual emissions, Russia and countries around the Caspian Sea reported less than half their emissions, according to the report. That IEA estimate is also incomplete, as satellites have blind spots, including the main Russian oil and gas fields.

The IEA report noted that methane leaks from the world’s fossil fuel operations added up to about the amount of gas used in Europe’s power sector. If it was available to the market, the report said, it would significantly reduce prices.

The report also found “superemitters” in the Permian Basin of Texas.

While U.S. gas may be cleaner than Russian gas, it has a long way to go, said Mark Brownstein, senior vice president for energy at the Environmental Defense Fund.

“People who live in glass houses shouldn’t throw stones,” he said. “This idea that Russian gas is terrible and U.S. gas is not as terrible kinda misses the point.”

The switch away from Russian gas is happening, he said. But he argued that the United States and other producers still need to reduce their methane emissions, and Europe needs to replace Russian gas with the cleanest fuel possible.

Producers in the United States are making progress on reporting and limiting their emissions, said Ben Cahill, a senior fellow in the Energy Security and Climate Change Program at the Center for Strategic and International Studies. But they need to make more progress if they’re going to say gas exports help the climate.

“I think LNG can make a strong case it can be a net benefit,” Cahill said. “But they have to prove it. They can’t do it right now.”

Companies are already finding that buyers want to know about the methane intensity of the natural gas they’re offering. That will grow, he said, as Europe looks for new sources.

If they’re really going to meet climate goals while sending more gas to Europe, countries and companies need to look at reducing demand for gas through policies that promote electrification and investment in renewables, said Peter Erickson, Climate Policy Program director for the Stockholm Environment Institute.

“The way to supply more gas is to free it up by using less in other places,” Erickson said. The amount of gas Europe needs could be supplied by the “slightest decrease in demand” among other developed countries, he added.

It’s also unclear whether sanctions will cut Russian production or just send it to other places less concerned about Russia’s invasion or its carbon footprint. Russia has been working closely with China on plans to increase pipeline shipments.

And it’s not clear that Russian emissions would go away, even if Russian production did.

Oil and gas wells don’t seal themselves up when they stop producing. They can — and often do — just keep leaking methane into the atmosphere. That’s certainly true in the United States, where one study estimated the country has 3 million orphan wells emitting thousands of tons of methane every year (Energywire, May 20, 2019).