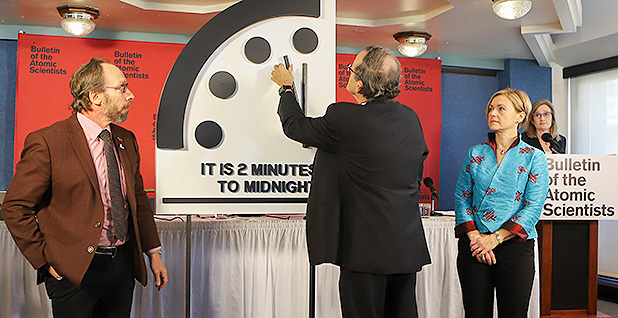 Unchecked climate change has led a group of scientists to move the iconic Doomsday Clock 30 seconds closer to midnight, the symbolic point of humanity’s annihilation based on the probability of global catastrophe.

The failure of world leaders to respond effectively to the "looming threats" of nuclear war and a warming planet prompted the Bulletin of the Atomic Scientists‘ Science and Security Board, in consultation with the Board of Sponsors, which includes 15 Nobel laureates, to move the clock to two minutes before midnight — the closest time since 1953, at the height of the Cold War.

While the potential of a nuclear holocaust received top billing, the scientists noted that climate change is not far behind.

"On the climate change front, the danger may seem less immediate, but avoiding catastrophic temperature increases in the long run requires urgent attention now," they wrote in a statement.

"The nations of the world will have to significantly decrease their greenhouse gas emissions to keep climate risks manageable, and so far, the global response has fallen far short of meeting this challenge."

Sivan Kartha, a senior scientist at the Stockholm Environmental Institute and a member of the science board, said the panel has been deliberating whether to factor in climate change for years. It was first factored into deliberations in 2007.

Kartha said that while nuclear threats are "clearly" front and center this year, "climate change is becoming more and more serious as a potential existential threat."

"All kinds of things have happened; we’ve seen devastation in the Caribbean because of the supercharged hurricanes. We saw that 2017 is the hottest year on record that wasn’t boosted by an El Niño event," he told E&E News.

"There were heat waves across the world; both the U.S. and Canada had massive wildfires and were indeed exacerbated by drought; and something that’s less visible, but may in some ways be more concerning, is that the arctic ice cap has reached its smallest ever winter maximum, and that record has been broken three years in a row," Kartha said.

The Arctic ice cap reflects the sun back into the atmosphere. Without it, the heat is absorbed by the world’s oceans, which then expand and contribute to sea-level rise.

"We’ve kicked off feedbacks that are amplifying our own failure to curb greenhouse gas emissions," said Kartha. "The more we allow this to proceed, the more it’s out of our control."

He added, "So that’s all very worrisome."

"It’s really meant to contribute to policy and bring better analysis to decisionmakers," he said. "But it permeates its way into a public consciousness and pop culture that’s usually taken up by gossip and ultimately less consequential matters."

Accompanying the change of time is an action plan, #RewindtheDoomsdayClock, that features a number of recommendations to move humanity away from the brink of destruction.

Global governments should redouble efforts to reduce greenhouse gas emissions, the scientists said. They note that the pledges made under the Paris Agreement are "inadequate."

U.S. citizens should demand, "in all legal ways," climate action from their government, as "climate change is a real and serious threat to humanity," they said.

They also advise President Trump to refrain from provocative rhetoric regarding North Korea, given the country’s unpredictable nature.

The Doomsday Clock was created in 1947, when the perceived greatest threat to humanity was nuclear war between the United States and the Soviet Union. The idea was formed when Bulletin co-editor Hyman Goldsmith asked artist Martyl Langsdorf to design the 1947 cover of the first magazine the former newsletter published.

The artist first set the clock at seven minutes to midnight because, she said, "it looked good to my eye," according to the Bulletin website. The clock was first reset to three minutes to midnight in 1949 after the Soviet Union tested its first atomic bomb.