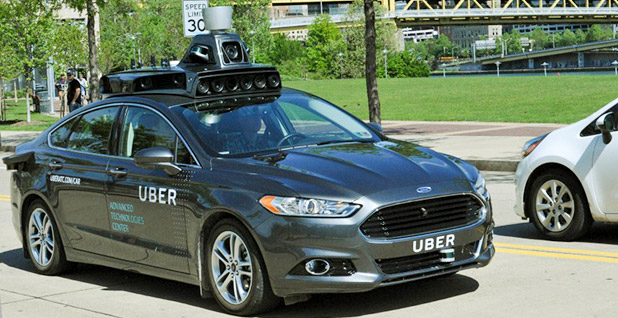 Uber began testing self-driving cars in Pittsburgh this spring. Starting in a few weeks, residents will be able to hail rides in the autonomous vehicles. Photo courtesy of Uber.

Pittsburgh residents hailing Uber rides could soon find themselves getting into a car without a driver.

The ride-hailing company will begin testing autonomous vehicles in the Steel City in a few weeks, starting with a handful of cars, then working up to a fleet of 100 Fords and Volvos.

"It is a very significant step forward," said Stephen Ezell, vice president of global innovation policy at the Information Technology and Innovation Foundation. "It shows that the pace of innovation and competition and deployment in this space is only continuing to accelerate."

Technologically speaking, Uber isn’t doing anything different from other companies looking to get into the driverless car space. In fact, it’s behind the curve. Google has been testing its autonomous vehicle on public roads in Silicon Valley for years. Meanwhile, Tesla Motors Inc.’s rollout of its "Autopilot" mode earlier this year made headlines after it was involved in a fatal car accident in Florida.

"They haven’t won the war," Kelley Blue Book analyst Karl Brauer said. "They are in an extremely long war with Google and Apple and Tesla that will continue far beyond this."

What makes Uber different is that it’s allowing the public — not just Google engineers or those who can afford Tesla — to see the technology firsthand. Customers who opt into the Uber test program, which will be monitored by two engineers per vehicle, will ride for free.

"What is interesting and exciting is that we are seeing the product development and business model innovation at the same time," Ezell said. "Uber isn’t trying to compete just to design the safest possible autonomous vehicle, but also to create a compelling transportation experience."

For years, experts have said the best way to incorporate autonomous vehicles into society would be for driverless cars to also be connected, electric and shared (Greenwire, Feb. 16).

In that utopian scenario, vehicles could go from one customer to another, eliminating the need to park on crowded city streets while reducing energy consumption and pollution. Consumers would save money both on rides and on auto insurance and maintenance.

Uber would profit, too, because using autonomous vehicles would erase the need to pay drivers.

"The combination of autonomous vehicle technology and Uber-like ride-sharing is really the best of both worlds," Brauer said.

Ezell also notes that, when it comes to business models, Uber has a shorter leap to make than Ford or Google.

"What we are talking about is that driving — or not having to drive — is the commodity, not the car," he said. "You can envision a future where leading car companies become mobility service providers, but that’s already Uber’s space."

Automakers are well aware of this.

Tesla CEO Elon Musk released a "master plan" last month describing how his company would use autonomous technology to create its own ride-hailing services (EnergyWire, July 22).

And General Motors, Volvo and Ford have been partnering with ride-hailing companies like Uber and Lyft to supply their driverless fleets instead of exclusively selling to individual car buyers.

And Pittsburghers should expect to see humans in the driver’s seats of Ubers for quite some time.

Google, which is the most advanced at testing the technology, has tested its cars on more than 1.7 million miles without a fatal accident. But experts agree that autonomous vehicles need to be tested for hundreds of millions of miles in road conditions more diverse than what Silicon Valley can offer before they are considered safe and market ready.

And even if companies were ready to bring autonomous vehicles to mainstream car lots, regulators are still figuring out how to approve them.

The Department of Transportation has been bullish about creating safety exemptions for autonomous-vehicle testing, believing that the technology could ultimately help the nation reduce its tally of more than 30,000 road deaths a year (Greenwire, Jan. 14).

But DOT is still unsure what to do once the cars are ready for market.

A fundamental obstacle is that federal safety standards define cars as having steering wheels and brakes — things that Google and other companies are planning to jettison in their fully autonomous vehicles (E&ENews PM, March 11).

State transportation agencies face similar issues, with California and Pennsylvania allowing for autonomous vehicle testing there as long as cars have "drivers" in charge (Greenwire, Dec. 17, 2015).

Those regulations won’t work when the autonomous vehicles are on car lots.

"Traditionally, our theory in assessing new technology has been tried and true, but there are disruptions coming to us, and we want to be flexible enough and nimble enough to think about problems that are solved in new ways that may not meet standards we had in the past," Transportation Secretary Anthony Foxx said during remarks in San Francisco yesterday.

DOT is hoping to release guidelines on the issue in the next few months. Those could require pre-market testing, but the department has released few details.

The agency also plans to establish a federal advisory committee to study how to best regulate emerging transportation technologies without stifling innovation.

One complication facing DOT is that, because autonomous vehicles are so new, "it’s not really clear how to test them," said Mary Louise Cummings, who directs the Humans and Autonomy Lab at Duke University.

Much like human drivers, she said, computers might not make the same decision when they are put in the same situation twice.

"Anytime you have robots reasoning in these conditions, no one is really sure how to test them to make sure they are absolutely safe in all conditions," she said.

Still, she said, there are a few "do’s and don’ts." She faulted Tesla for how it rolled out its Autopilot mode, as an overnight software update allowing untrained drivers to use the technology as a way for the automaker to accumulate data.

That method proved deadly in May when the driver of a Tesla Model S was killed when his car in Autopilot mode slid under a tractor-trailer. Neither the driver nor the technology stopped the vehicle.

The National Highway Traffic Safety Administration is investigating the death. Musk called it a "tragic loss" in a blog post last month, but he defended his technology, saying it warns drivers to maintain control of their vehicles before allowing them to use it (E&E Daily, July 15).

By contrast, Uber is keeping trained engineers in its vehicles, even as it provides rides to inexperienced passengers.

"I’m 100 percent in support of what Uber is doing," Cummings said. "The car will come to pick you up with someone watching it from the driver and passenger seat ready to step in, which means you have twice as many drivers as usual, plus the car."

Though experts say Uber’s on-road testing won’t place it ahead of the competition, one clear winner in the trial is Pittsburgh.

"This does fortify their position in the mobility industry," said Adie Tomer, fellow at the Brookings Institution’s Metropolitan Policy Program. "Pittsburgh has a major presence in artificial intelligence — not just driverless technology — and this is very much in line with that."

The Steel City has been trying to rebrand itself as a robotics hub for decades, boosted largely by the faculty and students at Carnegie Mellon University’s Robotics Institute, which entered into the autonomous sector 30 years ago as part of a contract with the Department of Defense.

Pittsburgh is now home to more than 40 robotics companies, including both startups and satellites of big-name brands like Uber’s own Advanced Technologies Center.

"Pittsburgh, and in particular Carnegie Mellon University, have been leaders in autonomous vehicle research for decades, and this is the logical next step," Mayor William Peduto said.

Until now, however, many feel the city’s tech industry has been living in Silicon Valley’s shadow.

"When Uber came here, they started recruiting people to come to Pittsburgh from California and Washington," said Steve DiAntonio, president and CEO of Carnegie Robotics, which is unaffiliated with the university. "Usually, it is the other way around. So this is great for the region that people are realizing the benefits of coming East."

Kevin Dowling, CEO of Real Earth and president of the Pittsburgh Robotics Council, said the city has the same caliber of research as its better-known rivals, but with a much lower cost of living.

"I’ve spent a lot of time in the Valley and 16 years in Boston, and I love both places, but I chose Pittsburgh because I can own a house here," he said. "That’s why so many of our Carnegie Mellon graduates stay here, and that’s something more people will see, hopefully, with Uber here to elevate us."

But the director of the university’s Robotics Institute, Martial Hebert, said Uber’s presence is "only good for us and for the region," with applications to the university’s robotics master’s and doctorate programs likely to increase.

"The Uber activity is a very positive thing, not only from the P.R. and exposure standpoint," Hebert said, "but in terms of showing what is the technology we work on here collectively."