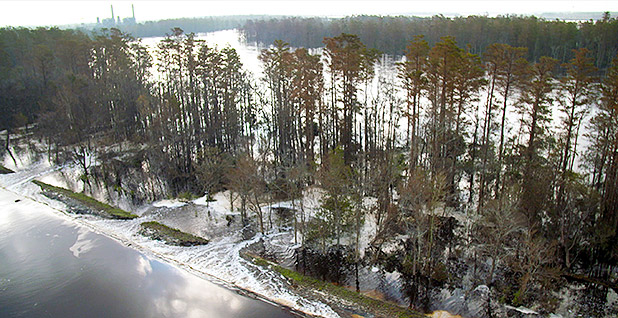 Cenospheres and water from a cooling lake at the L.V. Sutton Power Station in Wilmington, N.C., flowed into the Cape Fear River over the weekend. Duke Energy

The Cape Fear River overtopped its banks last week, breaching a dam on the northern side of Lake Sutton at the L.V. Sutton Power Station. Water from the lake, which sits between the river and two on-site coal ash basins, was also exiting the lake through several breaches bordering the coal ash pits.

The ash — waste from burning coal for power — can contain toxins like arsenic and mercury.

Over the weekend, Duke released water quality test results from samples taken upstream and downstream from the plant.

The samples, taken Friday, show slightly elevated levels of heavy metals like aluminum, copper and magnesium that Duke characterized as showing "little to no impact to river water quality."

"All results are well within the rigorous state water quality standards in place to protect the environment," Duke said in a statement.

The location of sampling could affect concentration of chemicals in the water.

After E&E News asked for location information, Duke spokeswoman Dawn Santoianni said the samples were taken at the Route 140 bridge 1 mile from the plant. The site was chosen because samples were taken from the bridge earlier in the week, as well, when flooding made getting a boat in the water difficult. Upstream tests were taken in the river "just north of the Sutton cooling lake boundary," she said.

State regulators will be on-site to take their own samples today, Department of Environmental Quality spokeswoman Megan Thorpe said in an email.

The lack of information about Duke’s samples is one reason Dave Rogers, a representative for the Sierra Club’s Beyond Coal campaign, said he is waiting to see those "third-party results."

"We tend to have a healthy sense of skepticism when Duke releases information," he said.

Rogers and other environmental groups have been frustrated by Duke, saying the company has downplayed the situation at the Sutton power plant throughout Hurricane Florence’s aftermath.

He characterized Duke’s daily press releases last week as minimizing the risk of breaches and flooding, even as each day brought news of more flooding.

"We understand that things change on the ground in unexpected ways, but it seems that Duke releases information that is designed to cover themselves versus actually sharing pertinent information with communities and other stakeholders."

One example, he said, is Duke’s description of cenospheres — lightweight, hollow beads made up of aluminum and silica that are byproducts of coal combustion.

On Thursday and Friday, Duke press releases argued that no coal ash had escaped a cooling pond and coal ash pits at the Sutton plant, but that cenospheres had.

Rogers disagreed with the implication that cenospheres could be less harmful to the environment than coal ash.

"Duke’s reliance on saying that the only thing has been released is cenospheres, that’s them downplaying what is probably a much more serious concern," he said.

He added that the cenospheres themselves were likely coated in coal ash because the two are stored in the same place.

As soon as the Cape Fear River stops flowing over the cooling lake dam and working conditions are safe, Duke plans to have teams at the location to stop water exiting the south side of the lake.

Santoianni said materials for the repairs have already been delivered on-site, with plans to begin work to stanch the flow of water today.

"We have a team headed out shortly on a boat to determine if the river is still overtopping the cooling lake on the northern end," she wrote in an email this morning. "Once the river stops overflowing, we can assess exactly what is needed for repairs."

It’s not clear what kind of cleanup will result from the flooding — or how effective it might be.

In 2014, a spill sent 39,000 tons of coal combustion waste from a retired Duke power plant into the Dan River near Eden, N.C. EPA declared the cleanup done just a few months later, after removing just 3,000 tons of ash.

The Sutton breach’s timing, occurring when the Cape Fear River was so swollen, will likely only complicate any cleanup effort, Rogers predicted.

"The Dan River was in its channel when that spill happened," he said. "In this case, coal ash could end up in roads, in people’s houses that have been flooded, in the ocean. It’s probably impossible to track it all down because of that flooding."