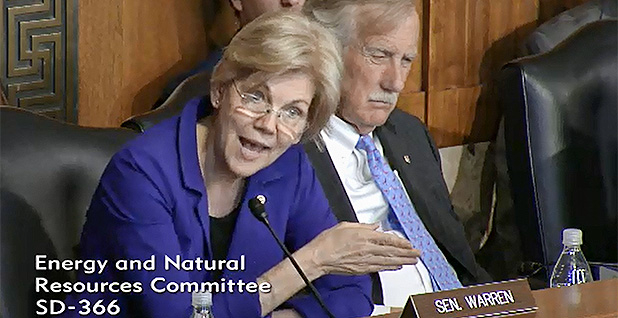 When Sen. Elizabeth Warren (D-Mass.) officially announced this week that she will not serve on the Energy and Natural Resources Committee in the next session of Congress, few people who watch the panel closely were surprised.

"When she got on [the committee], it just didn’t seem to be her main focus of interest," said McKie Campbell, a former Republican staff director on the ENR Committee.

"I’m assuming she got on because it was her best option at the time, being a relatively junior senator," Campbell said. "The way things sort out, often junior senators don’t get to have their first choice."

If the change is approved by her colleagues, as expected, Warren will trade her slot on ENR for a seat on the Senate Armed Services Committee.

Warren, of course, is a superstar in the national Democratic firmament, but on Energy and Natural Resources, her profile was considerably lower.

While she was not particularly active on the committee relative to some of her colleagues, Warren participated in hearings and spoke out on issues she cared about, often weaving in her passion for consumer protection and oversight of financial markets.

"Anything with a consumer angle. How’s the consumer being harmed, making sure the consumer isn’t being harmed," a Democratic committee aide said. "Energy is closely tied to financial markets, so her expertise in that realm definitely carried over and is useful."

Warren’s office did not make the senator available for an interview for this article. But her record on the committee speaks for itself.

Warren vehemently opposed the Keystone XL pipeline, calling it a terrible environmental risk and a threat to the American people.

"It’s not about jobs, it’s not about energy. Why is this bill so urgent? The answer is money. Money and power. The pipeline might not do much for the American people, but it is worth a whole lot to the Canadian oil industry," she said at a 2015 committee hearing.

"Who does this new Republican Congress work for: foreign oil companies or the American people?"

Warren also worked with the committee on the now-derailed "Energy Policy Modernization Act of 2015," offering three amendments, one of which would have authorized a study into the state and regional economic impact of exported liquefied natural gas.

While Warren voted for the bipartisan bill in committee, she said it was not legislation she would have written.

"The bill contained several other progressive measures to improve energy efficiency, grid modernization, and energy distribution and storage," she said in a statement at the time. "I am disappointed that the bill does not do more to address climate change, and I would have preferred that the bill simply maintained current law for liquefied natural gas (LNG) exports."

Advocating for consumer protection, Warren consistently called for federal agency transparency and public input. In June 2016, she criticized a Bureau of Land Management proposal that would have reduced the minimum public comment period for environmental impact statements and drafts of resource management plans.

Warren said it was "very important" that "everyone has a chance to have their voice heard."

The previous month, the committee had considered the nomination of Susan Beard for Energy Department inspector general. Warren pressed her on an audit on the Federal Energy Regulatory Commission’s permitting process and responsiveness to public opposition to pipelines.

Warren repeatedly asked whether Beard would make it a priority to complete the audit and seek public input on pipeline issues. Warren concluded with a call for bureaucratic transparency.

"Pipelines affect people’s homes, their property, their communities, and they have every right to be heard by the government on issues about pipeline permits," she said.

In a committee hearing on the "Sportsmen’s Act of 2015," Warren fought against a GOP-backed provision that sought to create a database of environmental groups that had collected damages from lawsuits against the federal government or agencies. Warren asked why there was no equivalent database for companies that broke environmental law and were sued by the government.

"Transparency is transparency," she said, "and I don’t see any justification for highlighting what environmental lawyers get paid and at the same time hiding the details of settlements with corporations that break the law."

Characteristically, Warren concentrated on issues of regulation, big business and the plight of middle-income Americans. She sparred with a witness, Oren Cass, a senior fellow at the Manhattan Institute, over his assertion that Congress should loosen emission standards on automakers but should not regulate oil and gas drilling.

"You know, we hear over and over how low energy prices mean that we need to go easy on oil and gas companies and that automakers, despite their track record of success, can’t possibly be expected to meet fuel economy goals," Warren said. "But if we really want policies that are going to work for the long term, policies that protect consumers and protect the environment, policies that encourage innovation and that create predictability, we can’t reverse course every time prices shift."

In another debate over fuel standards, Warren confronted a Republican-backed, auto-industry-supported bill that would allow car companies to duck efficiency standards if they installed at least three safety technologies.

Car companies had already agreed to most of these safety features, and installing three would garner a 3-gram CO2 credit toward their emission requirements. Warren wanted to know where this number, the 3 grams, came from. The witness, Mitch Bainwol, president and CEO of the Alliance of Automobile Manufacturers, would not give an answer. Warren demanded one.

"I had just one question, and that is who calculated the numbers that it was 3 grams? And if you’re telling me the auto industry didn’t do it, then I just want to know who did it. You’re out here lobbying for it. You say it’s supported by scientific evidence. Where did the number come from?" she pushed.

Bainwol ducked the question, bringing up credits that Tesla received. Warren cut him off.

"I think this is just trying to roll back part of the EPA rules without having to tell the American people about it," she said. "Car companies should make cars safer, and they should also meet their fuel economy obligations.

At times, Warren merged her dedication to financial regulation and reining in Wall Street with the energy issues. In October 2015, the committee held a hearing on selling product from the Strategic Petroleum Reserve to raise government funds.

Warren staunchly objected. She said selling crude from the reserve was a way to avoid taxing large financial institutions.

"It’s time to act like grown-ups and figure out how we’re going to pay for the critical investments that will help build a future for everyone, and we will never get there if we don’t get serious about making sure that everyone in this country, even billionaires, even big and powerful corporations, that everyone is pulling their weight," she said.

"Selling off our Strategic Petroleum Reserve is just not a way to do that."

Warren’s departure from the committee creates a vacancy on the Democratic side of the dais, and it’s unclear at this point who will take Warren’s spot. The seat is often attractive for Western lawmakers, given its jurisdiction over public lands. One possible scenario has Sen.-elect Catherine Cortez Masto (D-Nev.) being assigned there (Greenwire, Dec. 15).