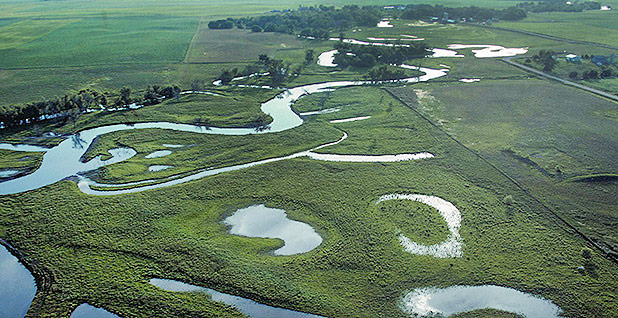 Days before U.S. EPA Administrator Scott Pruitt’s visit to the state, the Iowa Corn Growers Association privately told the governor’s office that it had doubts about the Trump administration’s plan to redefine which wetlands and small waterways are protected by the Clean Water Act.

EPA and the Army Corps of Engineers are working to repeal the Obama administration’s 2015 Clean Water Rule, also known as Waters of the U.S., or WOTUS. They plan to replace the regulation with one inspired by a 2006 opinion from the late Supreme Court Justice Antonin Scalia.

Relying on Scalia’s opinion would represent a break from past administrations, which have based their interpretations of the scope of the Clean Water Act on Justice Anthony Kennedy’s perspective. In Rapanos, Kennedy issued a concurring opinion stating that waters must have a "significant nexus" to navigable rivers and seas, which could include not just surface connections but also biological or chemical ones.

"Relying solely on Scalia could set us up for an overturn of the rule," De Jong wrote to Kayla Lyons, policy adviser to Iowa Gov. Kim Reynolds (R).

The email exchange came days before Pruitt visited Iowa as part of his "State Action Tour," talking to farmers and businessmen about the administration’s efforts to repeal and replace WOTUS.

De Jong, who now serves as the Iowa state executive director of USDA’s Farm Service Agency, did not respond to multiple requests for comment, nor did Lyon. Ben Gleason, a sustainable program manager at the corn growers association, declined to comment.

De Jong’s email was accompanied by a set of "WOTUS talking points" for the upcoming meeting with Pruitt saying the organization is "supportive of this administration’s efforts to repeal the 2015 rule and issue a new rule that is reflective of Congressional intent and the limitations established from U.S. Supreme Court rulings on Clean Water Act jurisdiction."

In her email, De Jong acknowledged to Lyons that the Iowa Corn Growers’ public and private stances on the split decision were different.

"We are supportive of a new rulemaking that includes both Congressional intent and the limitations set forth by the Scalia opinion in Rapanos," she wrote. "Offline, I would tell you Scalia offered one position but not the only one the Supreme Court has set."

The private admission from an agriculture industry representative is startling.

While legal experts have questioned whether a Scalia-based rule could withstand a legal assault, agriculture industry groups have been bullish in their support of the strategy.

Other industry groups, like the American Farm Bureau Federation, have said they want a Scalia-based rule that also takes into account previous Supreme Court cases like the 2001 Solid Waste Agency of Northern Cook County v. Army Corps of Engineers, which put a limit on regulating isolated wetlands.

None has argued that a new definition would also need to consider the other opinions in Rapanos itself. The 2006 case of a Michigan landowner who wanted to develop a tract of wetlands ended in a 4-1-4 split decision. Scalia was joined in his opinion by three other conservative justices, while the liberal-leaning justices issued a dissent. Kennedy joined neither side, instead issuing his concurring opinion.

The Bush and Obama interpretations based on the Kennedy opinion have thus far held up in court. Of the nine U.S. Circuit Courts of Appeals that have ruled on the issue, four rejected the idea that Scalia’s opinion in Rapanos is the "controlling" test of federal authority. One circuit said Kennedy’s standard is the only one that should be used.

De Jong acknowledged that precedent in her email to Lyon.

"So our ‘official’ opinion is that the new rule must include the limitations of Scalia," she wrote. "But knowing that these other opinions and congressional intent also needs likely addressed."

"It is not at all established that Justice Kennedy’s concurring opinions and the tests discussed within it regarding what qualifies as a WOTUS should be relied upon to the extent done so in the 2015 rule," the association wrote in September, one month after De Jong’s emails.

The comments added that EPA had "selectively read and misinterpreted Justice Kennedy’s understanding of the concept of ‘significant nexus.’"

That’s different from what De Jong emailed Lyon, writing that the "significant nexus" test "is going to have a role to play."