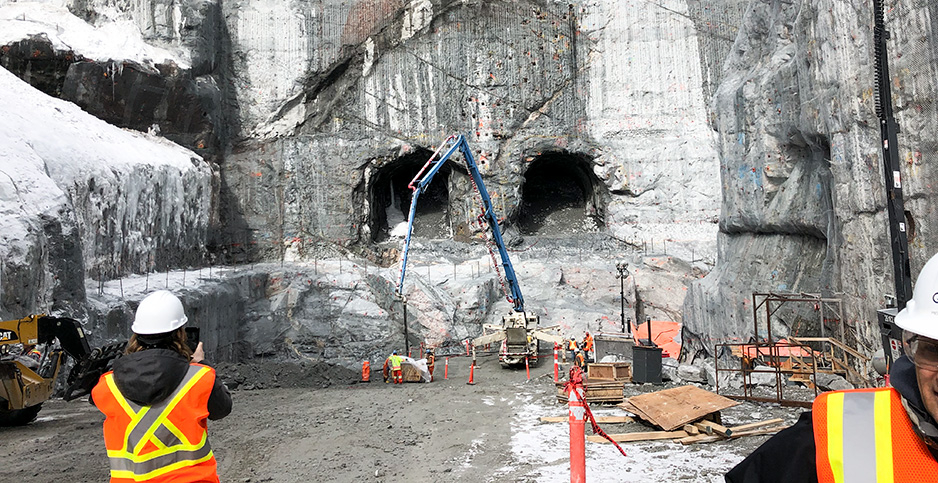 Two tunnels are dug through a hillside as part of a hydroelectric dam in northern Canada. The power could be sent to New England through a controversial plan to build a 146-mile transmission line. Benjamin Storrow/E&E News

A proposed transmission line in Maine has emerged as a key test of whether America can build the electricity infrastructure needed to slash greenhouse gas emissions.

The 145-mile line, which would carry hydropower from Canada into New England, received a major lift last week after Maine’s highest court ruled that a 2021 ballot referendum blocking the project was unconstitutional. The decision marks the latest twist in a four-year saga over the project, which is a cornerstone of Massachusetts’ efforts to cut carbon emissions.

The Maine high court returned the case to a lower court. The project’s developer, Avangrid Inc., will need to prove it began construction last year with its state permit, which was issued before Maine residents voted to block the project. Appeals of the project’s federal permits are also pending, and there is an open case concerning whether the line can cross state-owned land.

“It’s definitely a significant win because the alternative could have been far worse. But it doesn’t clear the way; there are a bunch of hurdles they are going to have to jump over,” said Timothy Fox, an analyst at ClearView Energy Partners. “If I were the project developer I would be hopeful, but I wouldn’t be popping Champagne corks yet.”

The legal drama in Maine comes as the national spotlight is focused on the challenges of completing large-scale infrastructure projects. Congress is preparing to debate permitting reform this fall, and the Federal Energy Regulatory Commission is contemplating an overhaul of its rules governing transmission planning.

Experts say new transmission is needed not only to connect clean energy projects to the grid, but to ship electricity back and forth across regions to accommodate fluctuations in renewable output. When the National Academies of Sciences, Engineering and Medicine mapped out a pathway to net-zero emissions by midcentury last year, it estimated the U.S. needs a 60 percent increase in transmission capacity by 2030 to connect and distribute future clean energy resources like wind and solar.

But building transmission lines can be a fraught undertaking. U.S. transmission development fell to less than 400 miles last year, down from 1,400 miles the year prior, according to the American Clean Power Association, a trade group representing clean energy developers.

The experience in Maine shows why transmission development can be so difficult.

The project is an outgrowth of a 2016 Massachusetts law that directed Bay State utilities to procure Canadian hydropower to complement a build-out of offshore wind. Under a subsequent deal with Massachusetts’ power companies, Hydro-Québec would deliver 9.45 terawatt-hours of electricity annually, enough to satisfy 18 percent of Massachusetts’ power demand.

But Massachusetts needs a transmission line to deliver the electricity. An initial plan to run a power line through New Hampshire was dropped after resistance from residents there. That led to the selection of New England Clean Energy Connect.

The nearly $1 billion project would cut a 53-mile path through the Maine woods, starting at the Canadian border and working its way west before reaching an existing transmission corridor that runs south to the city of Lewiston, Maine, where the line would be plugged into the New England grid.

The project has met overwhelming opposition in Maine, where nearly 60 percent of residents supported a ballot measure to block the project last year. Some voters expressed concern about fragmenting the Maine woods. The project was also opposed by competing power companies, which spent millions backing the ballot measure to block it. NextEra Energy Inc., the operator of the Seabrook Nuclear Station in New Hampshire, has been particularly fierce in fighting the line, pumping $20 million into the ballot referendum and challenging the project through state and federal regulatory agencies (Climatewire, Jan. 18).

Opponents say their resistance to the line goes beyond simple NIMBYism. Tom Saviello, a former Republican state senator who has led opposition to the project, argues that western Maine would carry the costs of hosting the project without receiving sufficient economic benefits.

In 2019, Gov. Janet Mills (D) negotiated a $258 million settlement meant to ease public opposition to the project (Climatewire, Feb. 25, 2019). The deal provided funding for electric cars and heat pumps but did little to address the primary economic concerns in western Maine, like a lack of high-speed internet access, Saviello said.

Avangrid “were getting the gold mine. We were getting a whoopie pie,” he said. “We are giving up all this to change the environment in the state of Maine.”

Much of the opposition to the project stems from distrust of Central Maine Power, the Avangrid subsidiary building the line, said Adam Cote, a lawyer representing opponents of the line. The utility has struggled with outages and billing problems in recent years. It ranked last in J.D. Power’s most recent customer satisfaction survey of utilities. Only a veto from Mills last year prevented passage of a law calling for a public takeover of the company.

Claims that the transmission line will benefit the climate sound especially hollow to some opponents, who note that Central Maine Power lobbied to kill a recent rooftop solar bill, Cote said.

“This really comes down to, would you trust CMP would do this?” he said. “They like to take the national mantle that they are trying to do something for the environment, but Mainers know different. They are doing something for profit.”

Avangrid declined to comment for this article. But in a statement after the Maine Supreme Judicial Court decision, the company framed the ruling as a victory for clean energy.

“It is time to move away from the status quo fossil fuel companies who will undoubtedly continue their fight to maintain a stranglehold on the New England energy market,” Avangrid said.

Advocates of the project say it’s necessary to further New England’s decarbonization efforts. Hydro complements wind and solar development because it can be quickly ramped up and down to meet fluctuating renewable output, they note.

It would also address concerns over the region’s reliance on natural gas, which accounted for almost half of New England’s power generation in 2021. The region has long relied on liquefied natural gas imports to balance the grid during cold weather events due to New England’s limited pipeline infrastructure. A particularly cold winter would be especially expensive if the region is forced into the spot market for LNG, where prices have been surging due to the war in Ukraine (Climatewire, May 10).

And while Massachusetts consumers are paying for the line, its benefits would be shared across ISO New England, the wholesale electricity market connecting the six Northeastern states, supporters say.

“We’ve got to move large amounts of renewables and zero-carbon energy to the major population centers. There is no getting around that if we’re to truly address climate change in the U.S.,” said Sharon Reishus, a former Maine utility regulator who supports the project. “If you believe in climate change, then we have to act. Some of that will be easy, and some of that will be hard. And siting transmission lines is hard.”

Fox, the ClearView analyst, said hydro is needed to marry New England’s decarbonization goals with the reliability of its power grid. He noted that New England Clean Energy Connect would become the third largest supplier of electricity in the region after the Millstone and Seabrook nuclear power plants.

“All the New England states want to go green and that is great, but we need dispatchable generation,” he said. “Hydro is much more reliable and much less intermittent. From the grid operator’s point of view, they were looking at this transmission line as an opportunity to get new supply built. It resolves the inherent conflict between green agenda and grid reliability.”

Avangrid had cut 124 miles of the project’s corridor, erected multiple transmission structures and spent $450 million by the time of the vote last year, according to the Maine Supreme Judicial Court.

The project now faces a likely trial in a lower Maine court, where it will need to prove it had vested rights prior to the November 2021 ballot measure. Maine’s high court found that a ballot measure could not retroactively limit property rights, but it left open the question of whether Avangrid was in compliance with the permit issued by Maine utility regulators.

The key question going forward will be whether Avangrid sped up construction of the project to ensure its rights were vested by the time of the vote.

While the court did not decide whether Avangrid performed substantial construction in “good faith,” the justices wrote, “it appears from the limited record developed in connection with the request for preliminary injunctive relief that NECEC did so.”

Even if Avangrid proves its rights are vested, it still needs to beat back a separate lawsuit challenging its ability to cross state land, as well as appeals to its federal Clean Water Act permit and presidential permit to cross an international boundary. The sheer number of permits and appeals speaks to the difficulties of developing transmission in the U.S. today, said Jeffrey Porter, who leads the environmental practice at Mintz, Levin, Cohn, Ferris, Glovsky and Popeo PC, a Boston-based law firm.

“Across the board, the multiplicity of regulations required and appeals allowable guarantee the amount of time it takes to build the infrastructure we want is going to take longer than the time we have,” Porter said. “Congress needs to look at how to streamline permitting and how do we limit appeals once a permit is in hand.”

Congress appears poised to have a debate over how to do that. As part of the deal to win West Virginia Sen. Joe Manchin’s (D) support for a climate and spending bill earlier this summer, Senate Majority Leader Chuck Schumer (D-N.Y.) agreed to address permitting reform this fall. Manchin has proposed setting two-year limits on environmental reviews, limiting appeals and permitting the Mountain Valley natural gas pipeline.

Future decarbonization efforts will benefit from increased regional planning, he said, pointing to the example of the Midwest where a multistate effort led by the regional grid operator led to the construction of 16 transmission lines over the last decade.

In the meantime, clean energy advocates need to work on outreach efforts in states like Maine to educate the public on the importance of transmission to decarbonization initiatives, he added.

“I don’t think the people in Maine who voted against the line really knew any of the clean energy benefits of the line,” Gramlich said. “These are systemwide benefits to make the whole system work and achieve a cleaner system portfolio.”