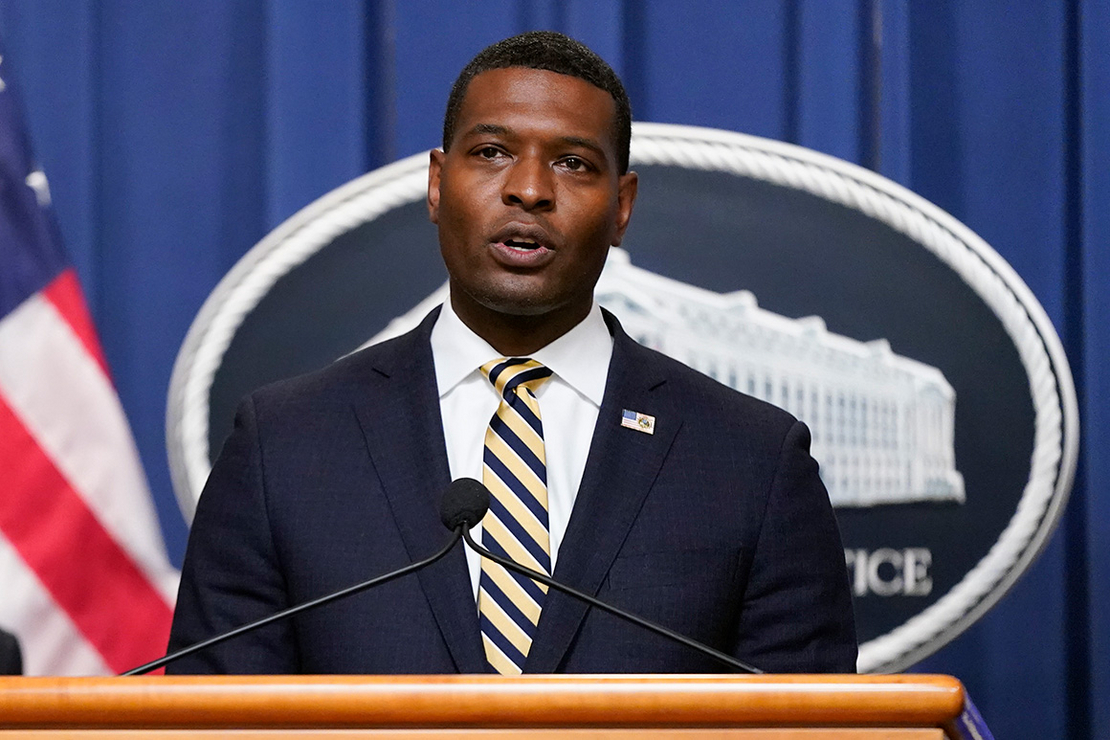 EPA Administrator Michael Regan speaking at a news conference on May 5 at the Department of Justice in Washington. Patrick Semansky/AP Photo

EPA has declined yet again to revisit the agency’s foundational ruling behind its climate change regulations.

The agency first denied them during the Trump administration’s final hours in office. Then, early on in the Biden administration, EPA withdrew that decision so it could be reviewed by its new team, which has now blocked the petitions too.

EPA now could face litigation over denying the claims to open up the agency’s endangerment finding. While those lawsuits would face long odds in the courts, a forthcoming Supreme Court decision could limit how EPA uses the Clean Air Act to address climate change.

“For the reasons discussed in the enclosed response, I deny the petition,” EPA Administrator Michael Regan said in an April 21 letter to the Texas Public Policy Foundation, which had pushed EPA to reconsider the finding. “Please accept my gratitude for your interest in these important environmental issues.”

The accompanying decision document concluded the petitioners had provided “inadequate, erroneous, and deficient arguments and evidence” that the endangerment finding was flawed.

The finding underpins EPA’s landmark climate rules to reduce emissions by cars, trucks and power plants among other sources. Issued in 2009, it found greenhouse gases like carbon dioxide and methane threatened human health. The agency ruling has withstood court challenges, too, with the U.S. Court of Appeals of the D.C. Circuit upholding it in 2012.

“The science supporting the Administrator’s finding that elevated concentrations of greenhouse gases in the atmosphere may reasonably be anticipated to endanger the public health and welfare of current and future U.S. generations is robust, voluminous, and compelling,” the document said.

Robert Henneke, the foundation’s executive director and general counsel, told E&E News he felt “justified” that a prior lawsuit by the group forced EPA to respond to its petition.

“We disagree with the substance of EPA’s response, which clearly the agency has not wanted to be on public record or create final agency action,” Henneke said. “We’re evaluating available options, including litigation to now challenge the underlying endangerment finding consistent with the arguments in our petition.”

He added, “While EPA publishing its response largely resolves the claims in our pending suit, the underlying issue remains far from resolved and we will continue to seek rescission of this policy.”

EPA spokesperson Tim Carroll told E&E News that when the agency withdrew its denials, it told petitioners “that it intended to carefully review and assess the petitions and issue a new decision.”

EPA carefully reviewed all of the petitions, including any supporting information submitted by petitioners as well as the scientific record and the administrator’s decision process underlying the finding, he said.

“The April 21, 2022, denial provides additional substantive context for and justification of the denial,” Carroll said.

‘It took more than five years’

Several of the petitions to reopen EPA’s endangerment finding were filed in 2017 during the first days of the Trump administration. There was hope, with a president in charge who had called climate change a hoax, the decision would be overturned.

But the agency only responded to the petitions on Donald Trump’s last full day in office, with his top EPA officials scrambling to leave a mark on climate policy, according to emails obtained by E&E News under the Freedom of Information Act. Those records also show how President Joe Biden’s appointees huddled and decided to withdraw and review the petition denials (Greenwire, March 3).

Now EPA has denied those claims yet again.

“It’s shocking that it took more than five years for EPA to provide a response,” Devin Watkins, an attorney at the Competitive Enterprise Institute, told E&E News. “One would think if the evidence was actually very strong they could have responded sooner.”

Regan denied CEI’s petition in a letter to the think tank. He also sent similar letters denying other petitions on the endangerment finding.

Watkins reiterated CEI’s doubts about the models and methodologies that support the finding, which was completed in 2009. The overwhelming view of scientists is that accumulated greenhouse gas emissions endanger human health and welfare — the standard set out in the Clean Air Act.

On CEI’s next move, Watkins said, “As to where we go from here, we have not yet decided.”

Carroll with EPA said the agency believes its latest denials “have strong support in both the science and the law.” He added that the petitioners’ arguments “are similar in scope and nature to” what has been previously raised regarding the 2009 finding and dismissed in the 2012 circuit court decision.

Environmental and public interest groups behind those petitions, however, remain in limbo. They told E&E News they have not heard from the agency since then.

“As to our own rulemaking petition, unfortunately, we have not yet heard from EPA since they withdrew” the dismissal, Carlesco said.

“Well, the answer is pretty easy as we haven’t heard from EPA since it withdrew the denial,” said Maya Golden-Krasner, climate deputy director and senior attorney at the Center for Biological Diversity.

“We have not heard anything more on this since we received the withdrawal of the denial,” said Derek Sylvan, a spokesperson for the Institute for Policy Integrity, based at the New York University School of Law.

The institute petitioned EPA to regulate greenhouse gas emissions under Section 115 of the Clean Air Act.

Then-EPA Administrator Andrew Wheeler denied their petitions right before he left office in January 2021. Then, in the following March, the agency also withdrew those dismissals for further review.

“EPA is considering the important issues raised in the petitions before responding,” said Carroll, the EPA spokesperson. He noted that the agency will follow the science and law in accordance with the Biden administration’s executive orders when reviewing the agency’s past actions.

“We will provide additional information as it becomes available,” he said.

Even opponents of stringent climate regulation urged the Trump administration not to reopen the endangerment finding, arguing that an effort to repeal the scientific finding would not stand up in court. Lawsuits to limit the scope of EPA climate rules have fared better.

The Supreme Court is expected to issue a decision as soon as next month that could bar EPA from reintroducing a standard for power plants’ carbon emissions that is similar to the Clean Power Plan, which was finalized in 2015 but stayed by the high court. Depending on the breadth of that decision, it could curtail EPA’s ability to use the Clean Air Act to write strong climate rules for a host of stationary sources from power plants to industrial sectors.

EPA has indicated it is preparing to move on new regulations once the Supreme Court issues its decision.

“We’re going to be ready to go as soon as the Supreme Court rules. We’ll be ready,” Regan said in a hearing last month (E&E Daily, April 7).