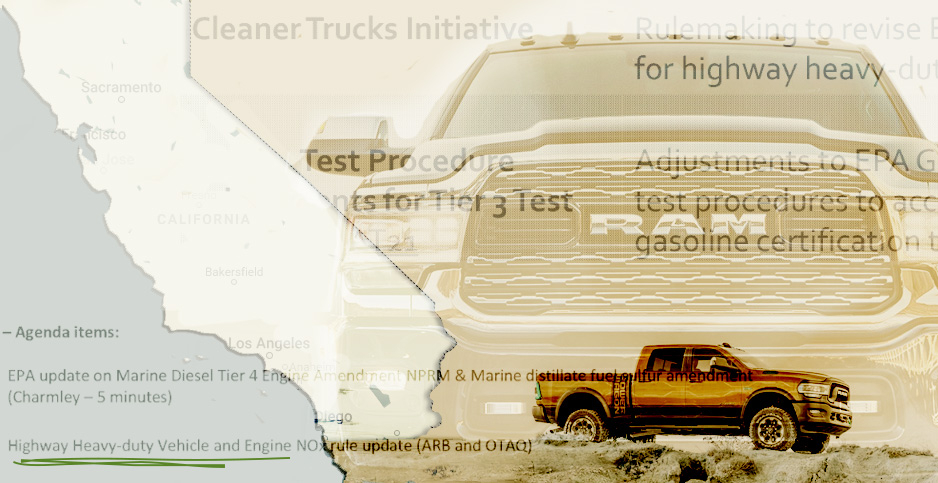 When it comes to passenger cars, EPA is at war with California.

But when it comes to big trucks, EPA and the Golden State are on friendlier terms.

Indeed, the agency and the California Air Resources Board (CARB) have been working in concert to update nitrogen oxides (NOx) emissions standards for heavy-duty trucks, according to multiple sources and hundreds of pages of emails obtained through public records requests.

The collaboration on the so-called Cleaner Trucks Initiative comes as a welcome change for environmentalists.

"There are some things where they just seem angry with California. But with the trucks so far, it seems like cooler heads are prevailing," said David Pettit, an attorney with the Natural Resources Defense Council based in Santa Monica, Calif.

For one, the trucking industry has asked EPA to work with California on crafting a national NOx emissions standard, allowing manufacturers to sell the same engines in all 50 states (Greenwire, Jan. 28).

In addition, the NOx emissions standards are unrelated to climate change, which President Trump has dismissed as a "hoax" while rolling back key portions of President Obama’s climate agenda. Rather, the standards are primarily related to air pollution. NOx is a key ingredient in ground-level ozone, otherwise known as smog.

"This is not climate change. This is air pollution. That’s what the Clean Air Act basically says," said Margo Oge, who led EPA’s transportation office during the Clinton and Obama administrations.

‘We are getting some blowback’

The California Air Resources Board first began looking into updating the truck standards in November 2016, according to a notice on its website.

By April 2019, the two parties were coordinating efforts on the matter, according to emails obtained by E&E News through the California Public Records Act.

The second item on the agenda was the "Heavy-Duty Vehicle and Engine NOx update," according to the email from Bill Charmley, director of the transportation office’s Assessment & Standards Division.

Collaboration between EPA and CARB was hardly the norm. Around the same time, the two parties were locked in a bitter feud over the rollback of greenhouse gas emissions standards for passenger cars.

As part of the rollback, EPA and the National Highway Traffic Safety Administration were proposing to significantly weaken the standards. They were also proposing to withdraw California’s Clean Air Act waiver for greenhouse gases, which for decades had allowed the state to set its own tougher rules.

At an event in San Francisco a month earlier, CARB Chairwoman Mary Nichols had harshly criticized the rollback as well as the Trump administration’s stance on climate change more broadly.

"We at CARB are spending way too much of our time fighting with the administration in Washington about the future of standards for existing vehicles," Nichols said at the event (E&E News PM, March 14, 2019).

"We are getting some blowback at the national level from the head of EPA and even from the president about whether we should be concerned about things like rising sea levels," she added.

A CARB spokesman said Nichols was not available for an interview for this story.

In pursuit of a national standard for trucks

So why did EPA and CARB get along with regard to trucks but not cars?

From the beginning, truck manufacturers and their trade associations have been vocal about their desire for EPA to work with California on crafting a national NOx emissions standard.

Cummins Inc., a major truck manufacturer, had two meetings and one phone call about the NOx emissions standards with Wheeler in the spring and summer of 2018, when he was still deputy EPA administrator.

A focus of the meetings and the phone call was the need for a national standard, said Cummins spokesman Jon Mills.

"We really want one national standard. We’ve said that publicly before," Mills said. "So that’s been our position, and we’ve just always been pretty transparent about that."

Echoing this refrain was the Truck and Engine Manufacturers Association (EMA), a powerful trade group whose members include Cummins, General Motors Co. and Ford Motor Co.

In regulatory comments, EMA wrote that EPA leadership on the Cleaner Trucks Initiative was "essential to achieving a national program — that is our key goal."

By contrast, the auto industry has been more muddled in its messaging on the rollback of emissions standards for passenger cars.

Automakers and their trade associations have repeatedly said in public statements that they support "one national program" for emissions from passenger vehicles.

But some of their actions say otherwise. In October, for instance, several automakers filed a legal motion supporting the Trump administration’s withdrawal of California’s Clean Air Act waiver for greenhouse gases. The waiver is key to maintaining the national program.

"My sense is that if you talk to the light-duty vehicle manufacturers, they say, ‘We all want one national standard.’ But they’re not acting that way," said Pettit, the Natural Resources Defense Council lawyer.

"Whereas on the heavy-duty vehicle side, they say that and they mean it," he said.

Since taking office, Trump has moved to dismantle dozens of climate regulations affecting power plants, pipelines and other major sources of the greenhouse gases that are warming the planet at an unprecedented rate.

But NOx is not a greenhouse gas, meaning it doesn’t warm the planet once it enters the atmosphere from truck tailpipes. Instead, it contributes to the formation of smog and other types of air pollution.

A key provision of the Clean Air Act is also at play.

Under Section 209 of the Clean Air Act, California must apply for a waiver from EPA to set tougher vehicle emissions standards than those issued by the federal government.

EPA can deny the waiver if it finds that California "does not need such state standards to meet compelling and extraordinary conditions."

With regard to passenger cars, EPA in September revoked the Golden State’s waiver on those grounds. The agency argued that the impacts of climate change in California were not "sufficiently different from impacts on the rest of the country such that California could be considered to need its GHG standards to meet compelling and extraordinary conditions."

With regard to heavy-duty trucks, California will need to apply for a separate waiver from EPA once it finalizes its NOx emissions standards.

But it’s unlikely that EPA will deny the state this waiver, as NOx emissions don’t raise the same thorny issue of "compelling and extraordinary conditions," said Oge, the former director of EPA’s transportation office.

"The Trump administration has taken steps to fight California and to roll back public health standards," Oge said. "But of course they have to give California this waiver. There’s nothing they can do to preempt California."

Dave Cooke, senior vehicles analyst at the Union of Concerned Scientists, agreed with this assessment.

"The justification they used for revoking the other waiver isn’t relevant here because this isn’t greenhouse emissions that we’re talking about," Cooke said. "So that rationale isn’t at play here."

Cooke paused before adding, "But I guess that doesn’t mean that they wouldn’t try. Who knows with these guys?"