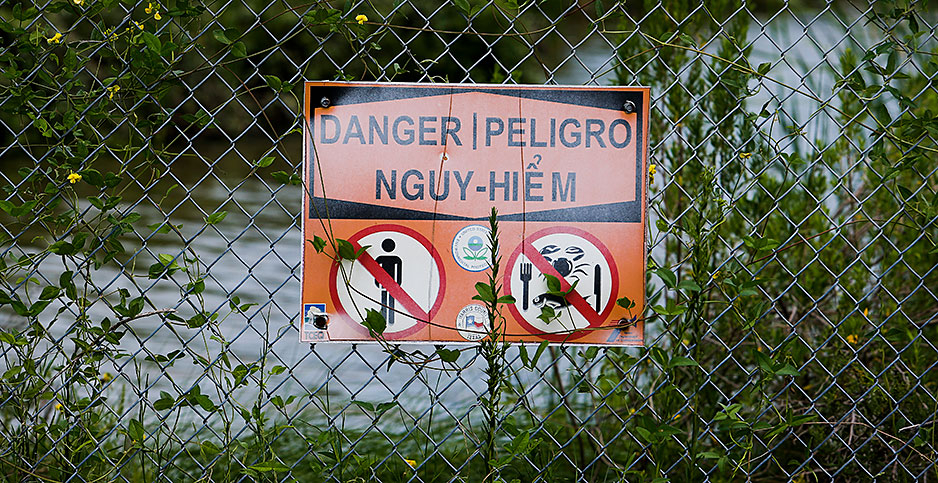 A sign near the San Jacinto River Waste Pits Superfund Site in Texas warns people not to enter or consume fish from the area. Michael Ciaglo / Houston Chronicle via AP

But that’s not what the responsible parties, International Paper Co. and McGinnes Industrial Maintenance Corp., have proposed.

The companies say contaminated sediments from the North Pit, which contains roughly one-third of the waste to be removed, can be disposed of in regular landfills because they’re not toxic enough for special protections.

The move could save polluters millions of dollars, but it’s not clear how they — or EPA — determined the plan was safe.

The design document released this spring describes how contractors combined sediment samples from around the North Pit into four composite samples that were then run through what’s called a TCLP test, which stands for toxicity characteristic leaching procedure.

But the section of federal code outlining which levels of chemicals are low enough to pass the TCLP test does not include dioxins; there’s no federal standard for using the test in this way.

Asked about the proposal, Thomas Ryan, a spokesman for International Paper, would say only that "the waste in question does not meet EPA’s definition of hazardous waste and, therefore, can be disposed of as a nonhazardous material." He referred questions about that definition to EPA. A representative of McGinnes declined to comment.

But neither she nor EPA headquarters spokeswomen answered E&E News’ questions about why the agency approved of the disposal plan to begin with or what standards it relied on.

Texas Health and Environment Alliance founder Jackie Young-Medcalf, who says living up near the waste pits caused her father’s bone marrow cancer and her own health problems, said EPA needs to "not cut corners" in reconsidering the waste disposal plan.

Holding ‘polluters’ feet to the fire’

Young-Medcalf is quick to say that she supports Trump’s EPA. Though the administration has an anti-environment reputation, she said, it is the only one that has taken an interest in the San Jacinto River Waste Pits site.

When the Trump administration took over EPA, International Paper and McGinnes had been arguing they shouldn’t have to remove the toxins from the pits and could merely cap them instead.

Jim Woolford, who led EPA’s Superfund program until he retired this winter, said Pruitt genuinely believed EPA could better people’s lives by focusing on toxic waste dumps. The administrator, he said, was obviously moved by talking to community activists like Young-Medcalf.

"After he met with Jackie, Administrator Pruitt signaled to us that it would be a better decision, in his view, if we took the waste out," Woolford said. "He basically said to us, ‘OK, I want a record of decision by the Oklahoma-Texas football game’ in June or July, so the Region 6 staff and our folks basically worked nights and weekends to get that remedy decision."

"You know, I have seen this administration hold polluters’ feet to the fire like never before," she said.

After the settlement was announced, the site was taken off EPA’s emphasis list.

"He had a belly laugh, and his gut response was, ‘What do you mean it would be classified as nonhazardous? It’s dioxin,’" Young-Medcalf recalled.

Woolford said that he didn’t remember discussing the issue with Young-Medcalf or Lester, but that it was at the EPA region level before he retired, prompting him to "ask our folks, have we done this anywhere else in the country, is this setting a precedent?"

"I can’t say it never happened, but I’m pretty sure dioxin from Superfund sites has all been disposed of as hazardous waste," he said.

Young-Medcalf said she’s now optimistic that EPA will "do the right thing" but questioned whether the agency would have acted without environmental groups’ scrutiny.

"I would like to believe that the agency wants this to happen appropriately," she said. "But I think where the rubber hits the road, the burden falls on organizations like ours to go through things with a fine-tooth comb and say, ‘Wait a minute, look over here, this isn’t right.’"