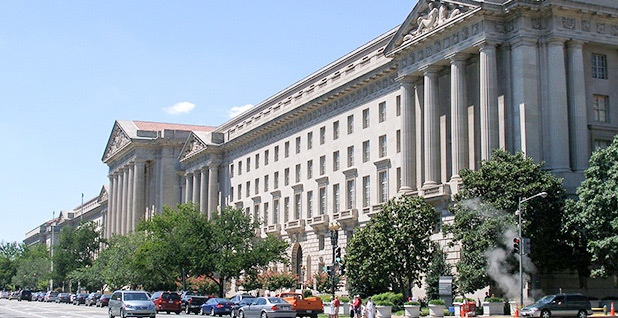 EPA says it can issue federal permits for projects, including pipelines, regardless of whether states raise questions about impacts to climate change or air pollution.

Section 401 of the Clean Water Act gives states the right to "certify" that projects requiring federal permits comply with both the act and their water quality standards. That means projects being permitted federally by EPA, the Army Corps of Engineers or the Federal Energy Regulatory Commission also must be approved, denied or approved with conditions by states.

In recent years, New York and Washington have used this certification process to deny permits for pipelines and coal terminals not just due to water quality concerns, but also because of their contribution to air pollution and climate change.

Guidance issued today by EPA seeks to limit that practice. The guidance is meant as a stand-in while EPA works on formal regulations.

The guidance itself doesn’t carry the rule of law, and therefore states are not bound by it. But it serves as a significant warning shot. States that ignore EPA guidance could well find themselves in court, either fighting EPA for ignoring their certification decisions or fighting with industry.

It says that state certifications should be limited to water quality issues and standards described in the Clean Water Act.

If a state tries to deny a permit or place conditions on it unrelated to water quality, EPA says federal agencies should discuss whether the state has waived its right to certify the project and allow the permit to proceed anyway.

"Though Section 401 envisions a robust state and tribal role in federal permitting and licensing process, it places limitations on how that role may be implemented to maintain an efficient permitting process within the overall cooperative federalism construct established by the (Clean Water Act)," EPA wrote.

The guidance document also limits how much time states have to make their certification decisions.

The Clean Water Act itself gives them up to a year but does not say whether that timeline begins once a permit application has been received or once a state deems it has enough information to make a decision.

That has resulted in state reviews taking multiple years as they ask applicants for more information about how projects might affect water quality or the environment.

EPA’s guidance today clarifies that the clock begins when a state receives an application and cannot be stopped even if applicants don’t respond to state requests for more information or if states want to wait for federal environmental assessments to be completed before making their decisions.

"An outstanding or unfulfilled request for information or documents does not pause or toll the timeline for action on a certification request," the guidance says.

It argues that although "outstanding information requests or non-responsive project proponents can be challenging, the EPA recognizes that states and tribes are water resource experts and have significant experience issuing permits and approvals for many types of projects, including for discharges to waters, dredge and fill projects, and above- and below-ground pipelines in their jurisdictions."

"EPA encourages states and tribes to evaluate the potential risk associated with information or data gaps and consider issuing timely certification with conditions that may address those potential risks," the guidance says.

The document follows President Trump’s April executive order directing EPA to look at its regulations for Clean Water Act certifications as a way to boost the oil and gas industry (Energywire, April 9).

Senate Republicans, who were supportive of Trump’s order, are already applauding the new guidance.

"States should not be able to hijack the Clean Water Act to shut down important energy projects," Environment and Public Works Chairman John Barrasso (R-Wyo.) said in a statement. "We need reform, and we need it fast. States like Washington, New York, and New Jersey are preventing us from using and exporting our energy resources. President Trump and I share a strong commitment to addressing this critical issue."

"We welcome this guidance as clear guideposts for federal, state and tribal authorities are needed that respect and support the important and distinctive roles of each participant," said Don Santa, CEO of the Interstate Natural Gas Association of America.

But the move is likely to be opposed by states and state groups accusing the Trump administration of trampling on states’ rights.

The Western Governors’ Association, which represents 19 states and three Pacific territories, has long been critical of any attempt to limit states’ Clean Water Act certifications and last month told EPA that "curtailing or reducing state authority under CWA Section 401, or the vital role of states in maintaining water quality within their boundaries, would inflict serious harm to the division of state and federal authorities established by Congress."

It’s not clear whether EPA’s new stance would stand up in court.

While courts of appeals have recently issued rulings supporting the idea that states must stick to a one-year timeline and that having an applicant withdraw and then resubmit a permit application does not restart the clock, case law on the scope of certifications is less supportive of EPA’s stance.

In 1994, the Supreme Court ruled in Public Utility District No. 1 of Jefferson County v. Washington Department of Ecology that states could condition hydropower permits to ensure minimum stream flows, even though stream flow is not something directly addressed in the Clean Water Act.

That’s something EPA’s guidance seems to recognize, stating, "Some courts in limited jurisdictions have concluded that the [Clean Water Act] does not authorize federal permitting agencies to reject conditions of a Section 401 Certification and that a federal license or permit must contain all conditions of a certification."