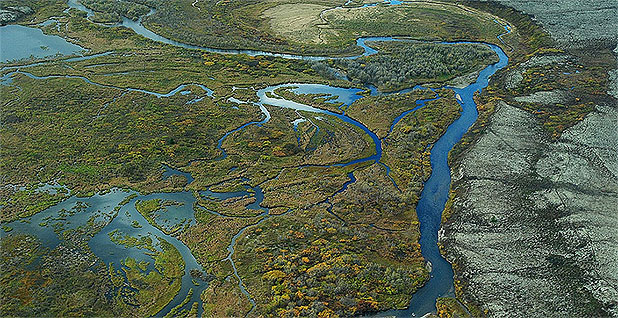 EPA scientists wanted their agency to ask for a new environmental review of the proposed Pebble mine project but were overridden by political staffers, according to several sources and a key document obtained by E&E News.

The scientists gave their agency two options for input on the proposed Pebble mine. The Trump administration picked the one that did not threaten to delay a final decision on the Alaska project until after the 2020 election.

A draft of those comments obtained by E&E News shows EPA career staff recommended that the agency ask the Army Corps of Engineers to conduct a new environmental review for the massive copper and gold mine planned upstream from Alaska’s premier salmon fishery. The draft comments also included harsher and more specific criticisms of the environmental review than what the agency ultimately sent to the Army Corps.

The June 7 document’s "recommended option" was that EPA ask for "a revised or supplemental environmental impact statement" (EIS) based on "major deficiencies" in the preliminary analysis.

That recommendation was not included in EPA’s final comments sent to the Army Corps less than a month later. Sources say the request remained in later drafts of the comment letter that were sent for approval to political appointees, who removed the language.

Sources say career employees were never told why the request was removed from the final comments.

"I don’t like to see politics overriding the science," said an EPA source about sharing the draft letter. The source requested anonymity out of fear of "retribution" from EPA.

Asked about changes between the draft and final letters, EPA spokesman Michael Abboud said, "EPA Region 10 expressed the Agency’s views and recommendations to the Corps in 175 pages of detailed, publicly available comments — some of the longest [National Environmental Policy Act] and Clean Water Act section 404 comments in EPA’s history."

While the comment letter was signed by EPA Region 10 Administrator Chris Hladick, sources say political appointees based at headquarters, who have been central to other agency decisions on the Pebble mine, reviewed the document before it was sent.

The Army Corps expects to make a final decision on the Pebble permit in mid-2020.

Legal experts say a supplemental EIS could add at least six months to that timeline, potentially leaving a decision on Pebble to whoever wins the next presidential election.

Just two weeks ago, the agency announced it will lift its own proposed Clean Water Act "veto" of the project. Sources say EPA officials killed the Obama-era action based on political concerns about appearing to hamstring industry (E&E News PM, July 30).

Removing the revised or supplemental EIS recommendation was the most substantial change between the draft and the final comment letters — but not the only one.

But while many of the specific technical comments also remained the same, the agency watered down rhetoric elsewhere.

For example, EPA deleted all nine instances in the draft letter where the agency said it was "concerned" or had "concerns" about the Army Corps’ review. The final letter had only "comments and recommendations."

While one section of the draft letter was titled "Key Information Missing in the DEIS," the final comments labeled it "Project Description and Mitigation Details."

Similarly, while the draft letter described the analysis as "missing" critical plans, the final version described those plans as "yet to be developed."

Where the draft letter said conclusions that Pebble would not violate water and air quality standards "are not reasonably supported," the final letter said they "should be further supported." What the draft comments described as "numerous data, analytic, and information deficiencies," the final document merely calls "weaknesses."

Some of those changes could be because the Trump administration has abandoned EPA’s decades-old system of ranking and grading environmental impact statements.

Under that system, EPA would assign two grades to each draft EIS, one evaluating the project’s environmental impacts and another for the actual EIS document. EPA paired those rankings with specific words that would be used to convey the agency’s level of concern.

It is not clear what, if any, impact EPA would have by calling for a new environmental review.

The Interior Department did demand a revised EIS in scathing comments that agreed with much of EPA’s criticism and concluded, "Based on these identified deficiencies, the DEIS is so inadequate that it precludes meaningful analysis."

That wasn’t enough to sway Army Corps Alaska District Regulatory Division chief David Hobbie. On a press call last month, he said the agency was not considering a supplemental analysis, describing the environmental review process as "all about disclosure."

"What we are trying to do … in the draft is disclose the potential possibility of all these impacts," he said. "If we have done that accurately and adequately, yeah, we would not try to pull back and do some kind of second draft," Hobbie said. "We would publish the final."

Neither EPA nor the Interior Department has the ability to force the Army Corps to conduct further analyses, said Eric Glitzenstein, an attorney with the Center for Biological Diversity.

But disagreement among agencies can be significant in litigation over Army Corps decisions, he said.

"Courts tend to take it far more seriously when there is a dispute between two federal agencies bearing upon environmental impacts than when it’s only people outside of the government complaining about such things," he said. "Having two agencies come in and say, ‘We agree there should have been more analysis’ would be a more compelling rationale that a court would look at."

Still, Glitzenstein said EPA doesn’t have to demand a new environmental review for the agency’s comments to have a legal impact.

"Even if they are using more diplomatic wording," he said, "the court would look at the substance of the comments."