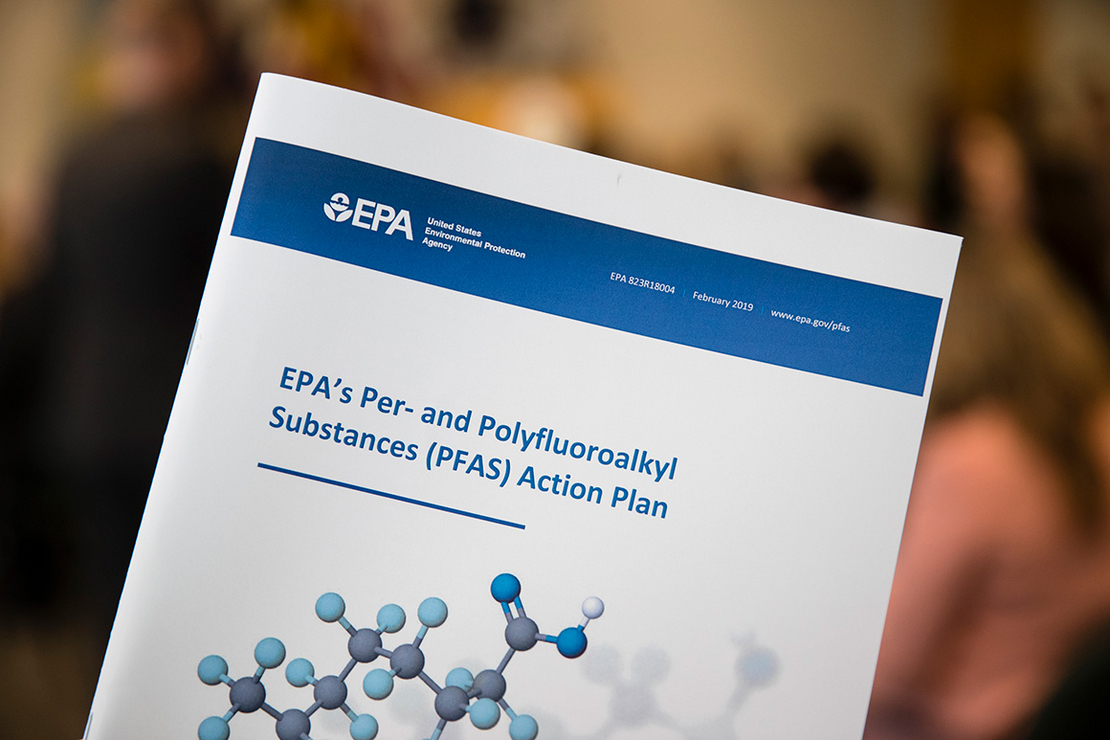 An EPA report on PFAS ahead of a news conference in Philadelphia in 2019. AP Photo/Matt Rourke

Efforts by industry groups to challenge EPA advisories for “forever chemicals” are ramping up even as experts sound the alarm over a wide range of health risks posed by the toxic substances.

The powerful American Chemistry Council announced over the weekend that it had filed suit in the U.S. Court of Appeals for the District of Columbia Circuit over EPA’s interim lifetime health advisories for two PFAS. Those advisories, for the notorious cancer-linked chemicals PFOA and PFOS, list dramatically low levels in drinking water as being safe for human consumption.

Announced last month, the advisories are nonbinding and it is unusual for such moves to generate legal pushback. EPA has stated that the advisories will likely change based on expert feedback and are only interim thresholds meant to safeguard the public in the meantime. But ACC asserted that the levels will have “sweeping implications for policies at the state and federal levels,” presenting a major threat for industry members.

“ACC supports the development of drinking water standards for PFAS based on the best available science,” the trade organization said. “However, EPA’s [advisories] for PFOA and PFOS reflect a failure of the Agency to follow its accepted practice for ensuring the scientific integrity of its process.”

The lawsuit argues that EPA was out of line earlier this summer when it unveiled updated interim advisories for PFOA and PFOS as part of a quartet of announcements regarding per- and polyfluoroalkyl substances in drinking water. Those levels are 4 parts per quadrillion for PFOA and 20 ppq for PFOS, down from 70 parts per trillion, an advisory that had been in place since 2016. Both chemicals are now considered to pose a health threat if they appear above “near zero” levels, according to an EPA official at the time (Greenwire, June 15).

In that same announcement, EPA also introduced new health advisories for the compounds PFBS and HFPO-DA, the second of which is often referred to by its trademarked name GenX, a product of Chemours Co. Officials said drinking water is safe to consume with less than 2,000 ppt of PFBS and 10 ppt of GenX.

Health advisories solely speak to the risks chemicals pose and do not factor in other issues, like economic realities and technological feasibility. When EPA unveiled the new advisories, officials emphasized that the thresholds were not legally binding and that any future regulations would likely see higher and less restrictive cutoff points in order to account for the complications around such low numbers for already invisible substances. The advisories are likely to have the biggest impact on state-level thresholds, as well as in expanding cleanup obligations for the Department of Defense, which has relied on EPA thresholds as it faces billions of dollars in contamination costs.

Tim Carroll, a spokesperson for EPA, declined to comment on ACC’s reaction and cited pending litigation as the reason. But the low levels have also been previewed for some time. President Joe Biden’s EPA has stated cracking down on PFAS is a top priority, and Administrator Michael Regan pledged last fall that his agency would be taking the issue seriously.

In October, an EPA toxicity assessment determined that GenX was deeply dangerous for humans following years of uproar in North Carolina, where that compound has contaminated drinking water in the Cape Fear River area (Greenwire, Oct. 25, 2021). A month later, regulators previewed that they planned to drop health advisory thresholds for PFOA and PFOS dramatically given the science that had emerged around those chemicals (E&E News PM, Nov. 16, 2021).

But industry members have slammed the moves, arguing that such low levels cannot even be detected by current EPA methods and accusing the agency of moving too quickly before its own Science Advisory Board has finished its review of the conclusions.

A draft SAB report released in April indicated board members have qualms with EPA’s use of systematic review, something ACC noted in its lawsuit. Broadly, however, SAB members have said they support the agency’s conclusions around the risks posed by PFOA and PFOS, including its determination that PFOA is a likely carcinogen (Greenwire, July 21).

The stance notably comes after industry members offered some praise for EPA’s approach to PFAS last fall, when the agency indicated it would take a subgroup approach to assessing the family of thousands of chemicals. Advocates panned that decision at the time, maintaining that regulators should instead look at PFAS as a class and regulate them across the board (Greenwire, Nov. 11, 2021).

As EPA has cracked down on individual chemicals, however, the regulated community has grown more resistant, previewing that legal action could become more commonplace as broader efforts to rein in PFAS advance.

Their pushback comes amid a mounting sense of concern around PFAS exposure among health experts. Last week, the National Academies of Sciences, Engineering, and Medicine released a report recommending expanded testing for people believed to have elevated exposure to the chemicals.

Advocates quickly pointed to the report as further proof that PFAS pose major risks for the public. The Environmental Working Group, which focuses heavily on PFAS issues, tied the report to EPA’s lowered thresholds and pushed for more dramatic action to address the chemicals.

“The entire U.S. population is likely overexposed to these toxic PFAS,” said David Andrews, an EWG senior scientist, adding that the report “supports the mounting evidence that shows exposure to these forever chemicals causes adverse health effects in people.”