EPA has early draft of rollback 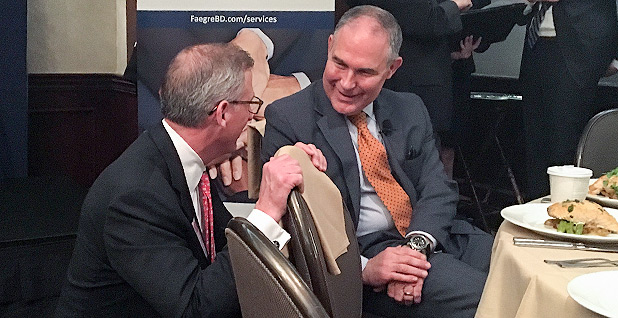 U.S. EPA has drafted the initial rulemaking for rescinding the Clean Power Plan and is developing a related economic analysis, according to an administration official with knowledge of the documents.

The regulatory language, known as a "preamble," is focused on the legal justification for nixing President Obama’s greenhouse gas standards for power plants.

It has not circulated widely at EPA and began as a memo at least a month ago, according to the source. It could go to the White House’s Office of Management and Budget for interagency review in the coming weeks. EPA did not respond to a request for comment.

EPA is moving forward with plans to revoke the rule, but Administrator Scott Pruitt yesterday said the agency had not yet determined whether to replace it with less stringent standards (E&E News PM, May 24).

The agency’s choices on the Clean Power Plan could determine the pace and direction of U.S. climate policy well into the future. Courts could weigh in on the decisions the agency makes and could use them to define EPA’s overall responsibilities and legal boundaries when it comes to climate change.

The gauntlet might not fall until the White House sorts out several policy decisions, including whether to exit the Paris climate deal and whether to try to fight a finding that EPA must regulate greenhouse gases. Secretary of State Rex Tillerson yesterday told reporters aboard Air Force One that Trump has not yet decided whether to stay in the accord with most of the world’s nations. Pruitt wants to leave the agreement, but others in the Trump administration disagree.

At least one industry group has outlined ways EPA could allow states to set their own minimal efficiency requirements for coal plants. That could replace the Clean Power Plan, which asked states to come up with plans to shift away from coal and toward natural gas, renewable energy and energy efficiency.

Opponents of the rule have said individual plant standards would more closely hew to the intent of the Clean Air Act, although they would hardly make a dent in overall emissions. They also might protect EPA from legal battles over not regulating greenhouse gas emissions after deciding they endanger public health.

An analysis by the Obama administration’s EPA found that the costs of complying with the rule would be between $5 billion and $8 billion in 2030, and energy efficiency investments would help limit power costs. It also determined by examining the social cost of carbon that climate and health co-benefits would outweigh costs.

Trump’s EPA is likely to suggest the Clean Power Plan would have cost far more. Pruitt yesterday said it would have cost $292 billion, citing figures from a NERA Economic Consulting report prepared for the coal lobby, the American Coalition for Clean Coal Electricity.

Pruitt’s team could cite higher costs to get more credit for rescinding the rule under a 2-for-1 executive order that requires any new regulatory effort to be offset by rescinding rules worth double the cost.

Pruitt has argued that Congress should specify in law if it wants EPA to restrict greenhouse gases. He says he believes the Clean Air Act and its amendments cover only air pollutants, although supporters of the Clean Power Plan say court precedent requires action on carbon.

Colin Hayes, the staff director for the Senate Energy and Natural Resources Committee, which Sen. Lisa Murkowski (R-Alaska) chairs, said yesterday that relying on decades-old laws to address climate change is a problem for people on both sides of the climate debate.

"At some point, the general agreement in Congress on a bipartisan basis that we can and should do something more than what we’re already doing to reduce greenhouse gas emissions, that just has to translate into legislative action," Hayes said. "I think the waters are brutally muddy right now as to what existing legal authorities can and can’t be used for as it related to greenhouse gas emissions."