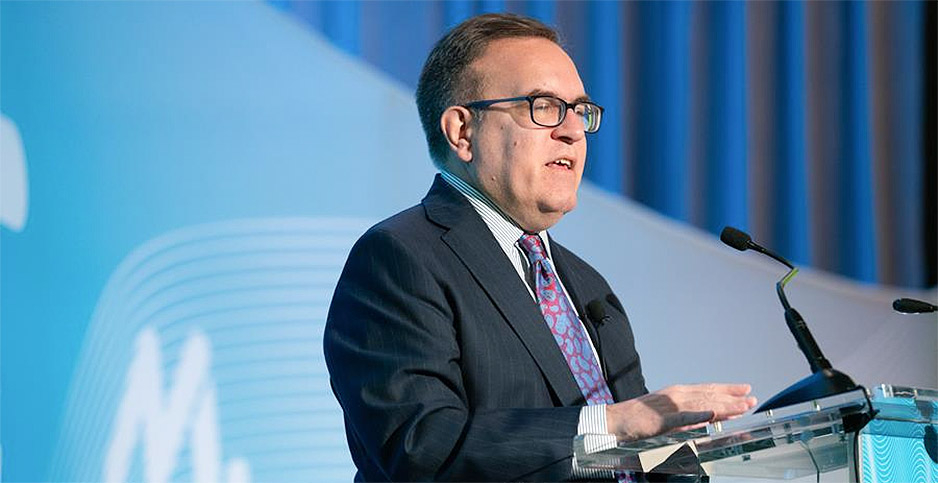 Rolling out the proposal at a meeting of the National Association of Manufacturers in Charleston, S.C., EPA Administrator Andrew Wheeler said the administration is clearing the way for oil and gas development while protecting the environment.

"Under President Trump, the United States has become the number one oil and gas energy producer in the world, while at the same time continuing to improve our air quality," Wheeler said in a statement.

"Our proposal is intended to help ensure that states adhere to the statutory language and intent of Clean Water Act. When implemented, this proposal will streamline process for constructing new energy infrastructure projects that are good for American families, American workers, and the American economy."

At issue is Section 401 of the Clean Water Act, which gives states the right to "certify" that projects requiring permits comply with the federal law and state water quality standards. That means projects being permitted by EPA, the Army Corps of Engineers or the Federal Energy Regulatory Commission also must be approved or denied by state regulators.

In recent years, New York and Washington state have used this certification process to deny permits for pipelines and coal terminals not just due to water quality concerns, but also because of their contribution to air pollution and climate change.

The proposal announced today would prevent states from considering issues other than water quality in their certifications.

"The scope of a Clean Water Act section 401 certification is limited to assuring a discharge from a federally licensed or permitted activity will comply with water quality requirements," the proposed regulation says. "Using the certification process to yield facility improvements or payments from project proponents that are unrelated to water quality impacts from the proposed federally licensed or permitted project is inconsistent with the authority provided by Congress."

The proposal also says federal regulators will decide whether a state’s denial of a permit or conditions placed on it "meet the new regulatory definition for a condition."

If federal officials decide it does meet that definition, conditions placed on the project would have to be included in a federal permit.

The proposal also takes aim at how much time states have to consider permit applications.

The Clean Water Act is vague on that permitting time, saying only that state decisions must be made within a "reasonable" amount of time that doesn’t exceed a year. The law does not clarify whether the clock starts ticking when a permit application is filed or when a state says it has enough information to make a decision. That has led to states taking years to make certification decisions when developers don’t initially provide enough information to regulators.

Today’s proposal would start the one-year clock when states have received a "certification request," rather than a complete application.

Those delays — along with questions about the scope of certification reviews — are why the oil and gas industries have been pressuring the White House to do something to curb states’ abilities to object to permits.

"This proposal is a win for manufacturers that would build on that success by offering much-needed clarity to states and manufacturers alike," he said in a statement. "Too often, the vaguely worded Section 401 has been used as an excuse to block critical infrastructure and trade projects. By setting clear guidelines, the EPA is empowering manufacturers to invest in our people and communities with confidence and to work with state leaders to protect our water and environment."

"The Clean Water Act is being hijacked by a number of coastal states to block energy projects," Barrasso said in a statement. "This coastal blockade cannot continue. It threatens America’s energy dominance and unfairly harms energy workers in Wyoming and other states."

The proposed rule will be strongly opposed by states’ groups like the Western Governors’ Association and the Association of Clean Water Administrators, which opposed the executive order.

In an email, ACWA Executive Director Julia Anastasio said that her group is still reviewing the rule, but noted that the group is opposed to changes that limit states’ rights.

"We have consistently expressed our concerns with the potential updates curtailing states’ ability to manage and protect water quality within their boundaries, and it appears that these changes are contrary to the principles of cooperative federalism upon which the Clean Water Act is based," she said.

"This rule would render states virtually powerless — by limiting the time and scope of their review of potentially dangerous projects — to protect vital water resources and the quality of their drinking water," Environment and Public Works ranking member Tom Carper (D-Del.) said in a statement.

That guidance doesn’t carry the rule of law and does not bind states, but the new regulation would.

Following the guidance’s release in June, legal experts questioned whether EPA’s stance would hold up in court.

While courts of appeals have recently issued rulings supporting the idea that states must stick to a one-year timeline and that having an applicant withdraw and then resubmit a permit application does not restart the clock, case law on the scope of certifications is less supportive of EPA’s position.

And in 1994, the Supreme Court ruled in Public Utility District No. 1 of Jefferson County v. Washington Department of Ecology that states could impose conditions on hydropower permits to ensure minimum streamflows, even though streamflow is not something directly addressed in the Clean Water Act.

EPA’s new proposal attempts to address some of those points and notes that in the Public Utility District case, the court was "careful to note that a state’s authority to condition a certification ‘is not unbounded.’"

"Although this decision has been interpreted by some to broadly expand state authority under section 401 — beyond assessing water quality impacts from the discharge and allowing conditions beyond the enumerated [Clean Water Act] provisions — the Court did not stray from the bedrock principles that a section 401 certification must address water quality and that appropriate conditions include those necessary to assure compliance with the state’s water quality standards," the proposed rule says.

The Army Corps also took aim at state permit reviews yesterday in a guidance signed by Maj. Gen. Scott Spellmon that would slash the time states have to review dredge and fill permits under the Clean Water Act, which are issued by the corps.

While the Clean Water Act gives states up to a year to review such projects, the Army Corps’ guidance would give them just 60 days.

While Army Corps guidance has long required states to stick to the 60-day time frame, the Trump appointee leading the agency, R.D. James, acknowledged this winter that it had been "standard practice" for the corps to give states the full year to consider permit applications (Greenwire, Feb. 2).

The new guidance would only give states exceptions under specific circumstances. Those include if a project is especially complex, if the state agency has requirements to hold public hearings outside the 60-day time frame, if the project in question is unusual or would have an especially large impact on aquatic resources, or if the site that would be affected has "complex" conditions.

The document gives three reasons that it said "should generally be considered as not supporting timeframe extensions."

Those include a state agency’s public notification requirements, and if state finances are strained or staff is overworked.

"The district engineer should not grant additional time if the state or tribal certifying agency’s request is based on fiscal resource issues, such as insufficient staffing levels, or funding constraints," it says.