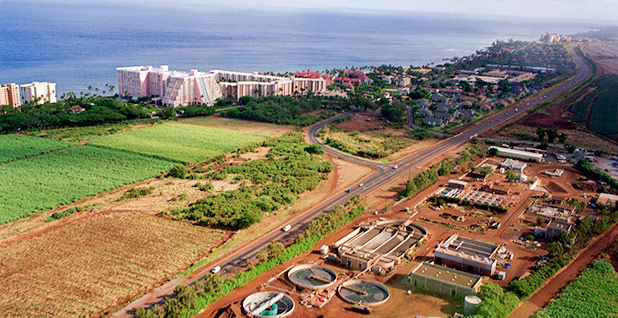 EPA officials met with lawyers involved in a key Clean Water Act case days before a petition was due to the Supreme Court.

The August 2018 meeting between EPA Office of Water chief David Ross, EPA General Counsel Matt Leopold and attorneys for Hunton Andrews Kurth LLP is one of a few interactions Ross has had with industry and its allies regarding the question of whether pollutants in groundwater that make their way to surface waters can be regulated under the Clean Water Act.

Hunton Andrews Kurth is representing Maui County in a pending Supreme Court case centered on wastewater disposal wells where waste mixes with groundwater and ends up in the Pacific Ocean.

EPA calendars for Ross — released to the Sierra Club under the Freedom of Information Act — show Hunton attorney Elbert Lin, who is litigating the Maui case, was one of three from the law firm who met with Ross, Leopold and others from EPA on Aug. 16, 2018.

Ken Kopocis, who led the Office of Water during the Obama administration, said it was "odd" for Ross to meet with attorneys involved in active litigation.

Kopocis recalled that he met with forestry and paper goods interest groups in advance of the Supreme Court ruling on the 2013 wetlands case Decker v. Northwest Environmental Defense Center but "not with the actual lawyers representing the defendants."

Former members of EPA’s Office of General Counsel stressed, however, that such meetings can be routine.

"The fact that attorneys representing County of Maui came in to meet with EPA officials prior to filing their petition for a writ of certiorari is not unusual or unexpected," said Kevin Minoli, a former agency lawyer now at Alston & Bird LLP.

"While EPA had filed an amicus brief with the 9th Circuit, it was not a party to the litigation and months earlier sought input from the public on issues related to discharges to groundwater," he added. "In that situation, it would not be unusual for representatives of one or both sides in the litigation to reach out and request a meeting with EPA officials, even without the Department of Justice being present."

In fact, EPA historically has encouraged outside groups and businesses to communicate directly with the agency before litigating against it or on related issues.

"Representatives of affected stakeholders, including industry, are generally welcome to request meetings with EPA officials — subject, as always, to adherence to potential conflicts of interest and ethics advice — and the timing of such a meeting is not a surprise," Obama-era General Counsel Avi Garbow said in an email. "The lawyers representing Maui would certainly have an interest in advising the Agency of their position on a Clean Water Act interpretation that may be heard by the Supreme Court."

Garbow, now at Patagonia Inc., said he emphasized open communication with outside lawyers when he was at EPA, especially with state officials considering legal challenges to new regulations.

"I wanted to make sure that they understood the legal basis for EPA’s final actions, and were not considering a lawsuit based on misinformation and political rhetoric (recognizing that most State Attorneys General are not themselves expert in environmental law)," he said.

Garbow noted, however, that there’s a difference between taking numerous meetings after a policy is finalized and doing so while it’s still being crafted.

"In that case, while I think there are advantages to keeping an open line of communication with potentially affected persons, EPA must pay close attention to rules governing its regulatory procedures and guard against special interests and changing legal positions without compromising its role to safeguard the environment and public health under our laws," he said.

He warned that meetings can raise red flags if one party has more access to agency officials than others or if a meeting results in a "coordinated effort" between the agency and outside lawyers.

"It would be highly unusual, for example, if any such meeting resulted in a coordinated effort in connection with forthcoming petitions to the Supreme Court," he said.

Ross and Leopold’s meeting with Hunton Andrews Kurth came as EPA was already working on agency guidance on how to handle groundwater-to-surface water pollution cases. That effort advanced last month, when EPA decided it would not use the Clean Water Act to regulate any pollution to surface waters that first passes through groundwater (Greenwire, April 16).

Ross’ calendars show he participated in 10 meetings or conference calls on the issue between January 2018 and March 26. The first meeting occurred within days of Ross being sworn in — before his official portrait was taken.

The only other meeting with non-EPA staff was a May 4 conference call with the Edison Electric Institute. The trade organization representing U.S. investor-owned electric companies would later file public comments arguing EPA should not regulate groundwater-to-surface water pollution.

EEI spokesman Brian Reil said those comments "cover the issues that were discussed during the meeting."

Ross’ calendars do not show any meetings with environmental groups or those that would oppose the agency’s groundwater guidance.

The Maui case is one of three high-profile lawsuits that have presented the groundwater question to the Supreme Court. Two others involve a gasoline pipeline rupture in South Carolina and contamination from a coal ash disposal site in Tennessee. The first is on hold, and the other is in its early stages.

In emails obtained by the Sierra Club and first reported by Politico, Holmstead said Kinder Morgan "thought EPA might want to submit an amicus brief in this case" due to the agency’s efforts to limit which wetlands and waterways are protected by the Clean Water Act.

Neither Holmstead nor EPA responded to requests for comment.

The Trump administration never did grant Holmstead’s invitation to file a brief in the 4th Circuit litigation. It finally weighed in on the issue in January in a joint brief requested by the Supreme Court for both the Maui and Kinder Morgan cases. Justice Department lawyers advised the court to take the Maui case but not the Kinder Morgan one.

Kopocis said he didn’t think it mattered whether EPA filed an amicus brief in either the Kinder Morgan or Maui cases because the agency had already signaled it would be writing guidance limiting the Clean Water Act’s reach.

"I don’t see a big difference between a policy and an amicus brief," he said. "You’re still telling the court ‘this is what we think.’"