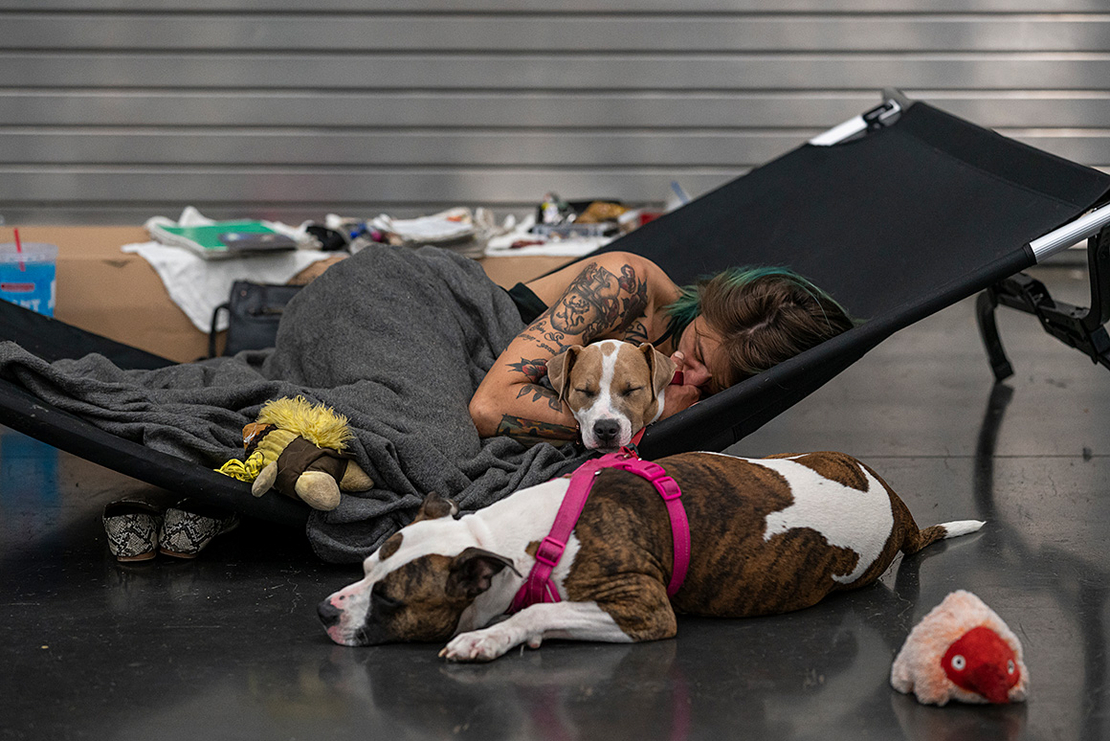 Austun Wilde rested with her two dogs, Bird Is the Wurd and Fenrir, at a cooling center in the Oregon Convention Center on June 27 in Portland, Ore., amid record-breaking heat across the Northwest. Nathan Howard/Getty Images

Faced with the possibility of displacement after a national eviction moratorium ends this weekend, Oregonian tenants are worried about the weather — specifically, the extreme heat and wildfire smoke baking the state.

The Centers for Disease Control and Prevention has extended its eviction moratorium, put in place at the height of the pandemic to prevent the coronavirus from spreading by ensuring that people had stable housing without crowding, multiple times. But the CDC has indicated that the current July 31 expiration date is final, and that the agency would likely be vulnerable in legal challenges if the order continued.

That leaves 125,000 Oregon households at risk of eviction next month, according to estimates from Portland State University. Nationwide, millions more Americans are vulnerable.

As the threat of eviction looms nationwide, so, too, do environmental threats driven by climate change. This week alone, a heat dome is currently baking much of the nation, while wildfires on the West Coast have sent unhealthy air pollution across the continent to Maine and New England.

“The background of climate change doesn’t disappear when the moratorium lifts,” said Aaron Bernstein, interim director of the Center for Climate, Health and the Global Environment at the Harvard T.H. Chan School of Public Health. “Evicted people everywhere are potentially going to be in dangerous places.”

What exactly happens when the moratorium is lifted could be complicated.

Congress allocated $46 billion to help renters pay off debts, but the success of state and municipal efforts in doling out those funds varies. A handful of states and some cities have extended their own eviction moratoriums past July while they distribute the rent relief funds, but millions of tenants will still be left with no protections.

Experts fear a wave of evictions and displacement in the coming weeks, with 7 million households telling the Census Bureau’s Household Pulse Survey that they were behind on rent, 3 million of which fear eviction as a result.

“At this pace, there is still going to be millions of households facing eviction,” said Sarah Saadian, vice president of public policy at the National Low Income Housing Coalition.

Once forced out of their homes, former tenants can have trouble finding adequate housing, as landlords shy away from renting to those with an eviction on their record. Many end up homeless, at least for a time.

One study across 12 cities, conducted by Vanderbilt University graduate student Zachary Glendening, found that 45% of families entering emergency shelters had experienced an eviction, while another by the Seattle Women’s Commission and the Housing Justice Product, focusing on Seattle, found that more than 37% of renters seeking legal aid for eviction cases ultimately ended up in homeless shelters.

Homeless and unhoused people are distinctly at risk from extreme weather because they are more exposed to it, unable to heed public health advice to stay indoors.

Several victims of the June heat dome over the Pacific Northwest were presumed to be homeless, including one man who, according to The Seattle Times, was found dead just a six-minute walk away from a Seattle-area cooling center, a day after the temperature reached 108 degrees Fahrenheit.

“A lot of people, when they are evicted, are doubling up and sleeping on the couch of a friend, the basement of a sibling, and that was the motivation behind the moratorium, because you don’t want overcrowded houses in the middle of a pandemic,” said Carl Gershenson, project director at the Eviction Lab at Princeton University. “But a lot of people are also sleeping in their cars — which obviously is a really bad option in 100-degree heat.”

In Oregon, just 22,000 households have applied for rent relief — only a fraction of those at risk of eviction — and the state’s own eviction moratorium only covers to those who have sought assistance. Homelessness could be a real prospect for the remaining 100,000 households that may be evicted, McCartney said, as the state’s social services are not equipped to handle such an influx of need.

“We don’t have the capacity even to help 400 extra people, so even if it’s not 100,000 people evicted this weekend, even if it’s just 500 in the Portland metro area, that would completely devastate our ability to respond effectively,” she said. “And the environmental concerns that come with an increased unhoused population are really worrisome for us.”

The Homelessness Research & Action Collaborative at Portland State University calculates that lifting the CDC’s moratorium could force Oregon to spend between $720 million and $4.7 billion to respond to the unprecedented number of displaced people in the state. Up to $1.2 billion of that would be in increased health care costs from inpatient and emergency room visits, but those costs don’t include any medical needs resulting from either COVID-19 or extreme weather and climate change.

“This is an undercount of what we think the actual cost will be,” Communications Specialist Stefanie Knowlton said.

Homelessness is not the only way in which tenants faced with eviction could become vulnerable to weather extremes. In fact, tenants worried about eviction could already be suffering by forgoing utility bills in efforts to keep their homes.

“Low-income renters will do literally anything to pay rent,” said Abby Boshart, a policy coordinator at the Urban Institute’s Metropolitan Housing and Communities Policy Center.

While conducting a survey of housing counselors this winter, she said, she heard the story of a renter who “pretty much sat in the dark throughout the entire pandemic with no heat or lights in order to keep his rent payments up.” Additional research has shown tenants will take on credit card debt or avoid paying electric or water bills in order to keep from being evicted.

“People value a roof over their heads over utilities, and as heat waves are on the rise, that’s a huge issue,” Boshart said. “When climate change is getting more extreme, it will always impact low-income communities of color more than anyone else, because they are already living in a vulnerable condition.”

When evicted people are lucky enough to not end up on the streets, they often instead find themselves in subpar housing.

Research from the Eviction Lab shows that 70% of tenants experience a serious issue in the next home they move into. That could include cockroach-infested living spaces, unventilated buildings, or homes with broken or leaky windows.

“Even if they have air conditioning, and they might not, it is probably broken,” said Gershenson. “They are not going to be in insulated, energy-efficient homes, so these are going to be really dangerous and uncomfortable places to be in a heat wave.”

Health experts say the situation underscores why climate change is often described as a “threat multiplier.”

“The CDC had this moratorium primarily because of concerns about COVID, but now we have the additional concern which is wildfires, poor air quality and heat,” said Georges Benjamin, executive director of the American Public Health Association.

Gershenson noted that many Northeastern cities have moratoriums on utility shut-offs during the winter to prevent low-income households from losing their heat, and said it is time for state and local governments to think about using similar measures to respond to heat waves and other climate-driven threats.

“It’s something that every state and every city is going to have to think seriously about in the future,” he said.