Ex-skeptic on the libertarian case for climate action 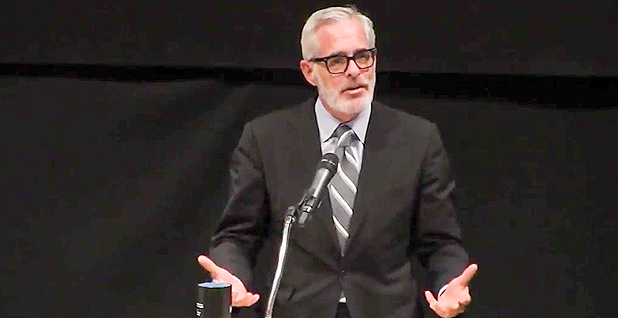 Jerry Taylor was raised in a household of Republican activists. The eldest of three sons, he moved to Washington in 1991 with the dream of becoming the next Lee Atwater, then the "flavor of the day" for campaign consulting.

He soon learned the capital was not short on Atwater wannabes, and he instead took an internship with the American Legislative Exchange Council, joining the conservative group’s energy, environment and natural resources task force. He was eventually promoted to task force director and was quickly offered a job with the Cato Institute.

For the next 23 years, Taylor worked to advance Cato’s libertarian agenda. His job was to change hearts and minds on issues like free markets, limited government and climate change.

He worked to demonstrate, without doubt, that the left was overstating the potential impact of global warming and that the economic toll carbon emissions reduction would take would not outweigh the benefits.

But as Taylor, 53, spent more and more time with climate science and economics, his views slowly began to shift. Eventually, he left Cato to found the Niskanen Center, a libertarian think tank.

He recently sat down with E&E News to discuss his transformation into an aggressive climate activist, how Ayn Rand’s views on air pollution have profoundly affected the far right, the challenges for rebel Republican lawmakers and the inevitable extinction of the GOP.

What was the process like moving from climate skeptic to advocating for aggressive action?

Well, it was gradual. … But various legs of the skeptic stool kept getting knocked out. The first leg that was knocked out was the science narrative that I was trafficking in. My ambition while at Cato was to wrestle with the best and the brightest on the other side. And it became clear that, through repeated engagement, a lot of the scientific narratives that I was forwarding were on very weak ground. And in many cases, what was even more disturbing was that they were intentionally misleading.

So I then grounded most of my arguments in economic narratives, that the cost-benefit analysis simply doesn’t suggest that decarbonizing the economy would advance human well-being that much. And those were more defensible positions, for a while.

But then a few things happened. First of all, Marty Weitzman comes along from Harvard. He argued that if you look at the fat-tailed distribution of climate outcomes, and you consider them in cost-benefit analysis, it just blows up the case for non-action. And the economists that I had generally deferred to in this discussion basically flew the white flag and conceded Weitzman’s point, more or less. Most climate skeptics weren’t aware of this development in the literature, and those that were just airily dismissed it.

It got to the point where I couldn’t find a credentialed economist who would argue against climate action. I could find economists, but they weren’t specialists in the field; they didn’t publish in the literature on climate economics. They were standard-issue libertarians without portfolio, and they weren’t particularly impressive. And it’s pretty bracing when you’re in the business of trying to marshal academic arguments for your point and you can’t find any academics to do it. So that was kind of a wake-up call.

Also around that time, a friend of mine, Jon Adler (who ran the climate operations at CEI before Myron Ebell took that slot), published a really interesting paper, which argued that even if the climate skeptics are correct, that still doesn’t make for an argument against action. We know that even under [skeptics’] narratives, climate change will impose significant costs around the world. Their argument, however, is that the benefits of [combating] climate change will more or less equal the costs of doing something about it, and so there’s no case for action.

Jon argued: Look, since when did libertarians get in the business of saying if party A destroys the property held by party B, but A profits more than B loses, then A is OK? No, that’s not a libertarian argument. In fact, libertarians are in the business of rejecting that argument in every other context. I thought that was very powerful, and I had never thought about it that way before. And once again, in the skeptic world, when Jon’s paper came out, there was a uniform reluctance to even entertain the conversation.

I tried to move out of the climate conversation, since I could no longer confidently argue against action, though I hadn’t been necessarily persuaded that aggressive action was required. But that point came when, near the last few years I was at Cato, Bob Litterman came into my office. Now, Bob was at one time a partner at Goldman Sachs, and he was the director of Goldman’s risk analysis operations. Bob … argued that you’re looking at this all wrong. If you price the risks associated with climate change, the full distribution of possible outcomes, there’s just no plausible argument for not engaging aggressive action. And when he left my office, I realized that my position was in shambles.

There was not any space at Cato for arguments to advance a carbon tax or aggressive climate action. I realized if I wanted to make those arguments, I couldn’t make them at Cato. I had to make them somewhere else.

So you founded the Niskanen Center. Where does the name Niskanen come from?

The name Niskanen comes from the former chairman of the Cato Institute, William Niskanen. Bill wasn’t just the chairman of the Cato Institute, he also was a member of the Council of Economic Advisers for Ronald Reagan. He was the chief economist at Ford Motor. And he famously resigned in 1979 when Ford endorsed quotas on auto imports. He’s a good free-market economist; he said, I can’t work for an organization in the business of screwing American consumers. Before that, he was one of the top whiz kids in [former Defense Secretary] Bob McNamara’s Pentagon, and he became very disillusioned by the Vietnam War. Though Bill was a principled libertarian, he endeavored to never allow dogma and ideology to cloud his read of facts. If he found that his ideological instincts were in tension with the data, the data would win.

What’s the most important thing to keep in mind now about energy policy/climate change?

Well, the main reason that the United States has not acted as aggressively to reduce greenhouse gas emissions has to do with the Republican Party. Unfortunately, this issue has become an ideological issue, which is a little silly. How you feel about free markets and individual liberty has nothing to do with how you feel about atmospheric physics.

Almost always, the messenger is more important than the message. So no matter how good an Al Gore movie might be or how accurate it may be, it’s going to have "squadoosh" impact on Republicans. Our main job at Niskanen is to talk to conservatives. As a friend of mine, Mitch Hescox, says: To appreciate science or to embrace mainstream science doesn’t make you liberal; it makes you literate.

I’m not entirely sure how in the world you advance the cause of free markets and limited government by burning the economy to the ground in some of the more catastrophic scenarios associated with climate change. Or if you believe that the government’s role is to protect property rights from being violated by trespassers, well then, that should apply whether the trespasser is a roving band of teenagers or an oil or coal company.

Why are conservatives so reluctant to work on climate policy?

For a lot of conservatives, environmentalist arguments about pollution have been ginned up from the get-go. They look at it as exercises in dodgy science that are largely about deindustrializing the United States and returning ourselves to some sort of pastoral worldview.

For a lot of conservatives, environmentalists are simply anti-capitalist jihadis. Ayn Rand, who is a real icon in my old world, argued that the risks associated with air pollution is pure fiction of anti-capitalist actors who want to destroy modern industry. And a lot of conservative and libertarian activists come out of the Randian world. They imbibe this in their early days, and it stays a part of their dogma for the rest of their lives.

But what we found is on Capitol Hill, there are a number of Republicans in the House and the Senate who are deeply troubled by the party’s orthodox views on climate change, which are beyond retrograde. And they would like the party to embrace a meaningful climate action; they’re just not entirely sure what that policy ought to look like. And there’s far more of them than you might think. They’ve been rendered silent based on the fact that Republicans who speak out since the emergence of the tea party have paid a political price for it in Republican primaries.

There are about 40 to 50 Republicans in the House and maybe 10 Republicans in the Senate who are interned in a penitentiary. And the guards of the penitentiary are Club for Growth, Americans for Prosperity and Americans for Tax Reform and a whole host of little think buckets like CEI that threaten to shoot anybody who tries to make a run for the fence.

And so the real task for these Republican rebels is to first of all decide jointly when to make a break for it. Because if everybody does it singularly, they’re going to be gunned down by the guards. You need to find a window of opportunity to run for the wall; you got to do it at the right time. The Republican rebels haven’t got any of this quite yet. They haven’t agreed to work together as much as we need. They have yet to find that window of opportunity to make a run for the wall, and there’s no escape vehicle in the form of what’s the right policy response.

What advice would you give the Republican Party for the next four-plus years?

It seems to me that Republicans have been so driven onto madness by partisanship that they are blinded not only to the nature of the party as it exists today in this administration, but where it’s taking their party and their political community. The idea that Republicans in the long run can survive by embracing a man — loudly embracing him in North Korean overtones — a man as ignorant, brutal, nihilistic and incompetent as this man, Donald Trump, and survive that in the long run, to me is amazing. … The storm that is coming against this administration is, in my opinion, politically unprecedented, and the Republicans are going to pay a long-term price. Anybody who’s closely associated with this administration, or a loud cheerleader thereof, will never wash the stain away from that for the rest of their political lives.

I think a Republican Party that embraced an open and not a closed society, a Republican Party that embraced an open economy, a tolerant and open culture, relatively open borders, and a party open to ideas and not closed to all of those matters. That’s a vision of the Republican Party that is not perfectly, but fairly closely, related to the vision that Ronald Reagan ran on in 1980. It’s a vision of the party that provides hope for the future and not a turning away of modernity. And it’s a vision of the party that is more anchored in freedom and liberty rather than one which is anchored in fear and authoritarianism and protection. The agenda that is being forwarded by the Trump administration is all about protecting communities, societies and the economy against competition, against other ideas, against other people. It is not an open and free society in any real fundamental sense. That’s not the Republican Party I wanted to be a part of when I came to Washington, D.C., those many years ago.