Experts distrust the tap, but prefer it to bottles 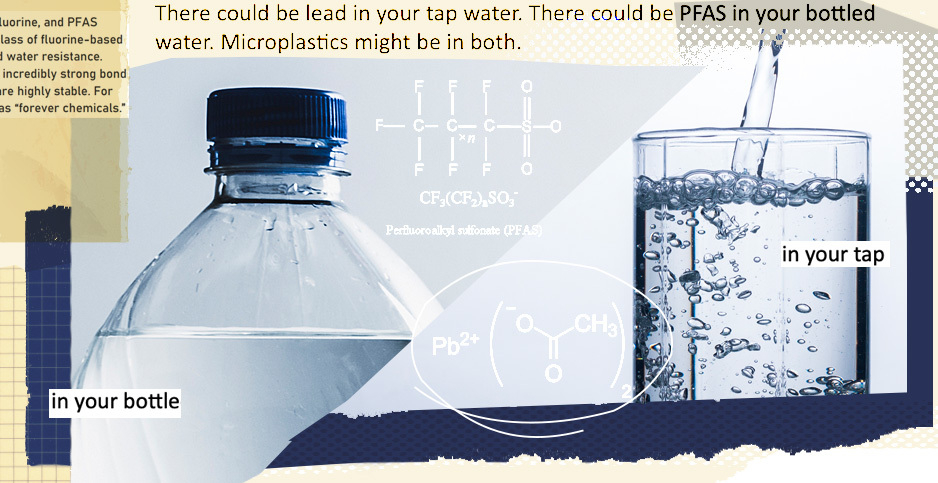 There could be lead in your tap water. There could be PFAS in your bottled water. Microplastics might be in both. Do you choose neurotoxic heavy metals or carcinogenic "forever chemicals"?

That’s the predicament facing Americans every time they take a drink of water.

"You know what, I don’t trust our water systems — tap or bottled," says Bruce Lanphear, a scientist whose research underpins EPA regulations on lead and mercury. "It is really hard for any of us to know or trust that our water is free of contaminants, even if we say we have more confidence in some sources for some contaminants."

Part of the problem for consumers trying to decide which risks to take is that water is regulated by different federal agencies depending on whether it comes out of a tap or bottle, but the standards aren’t always in sync.

EPA regulates the nation’s tap water, while the Food and Drug Administration regulates bottled water, which can come from natural springs or municipal taps. The two agencies have very similar regulations for many contaminants. FDA, for example, has said it won’t set mandatory standards for per- and polyfluoroalkyl substances, or PFAS, until EPA does.

But regulatory differences do exist, most strikingly for lead, with EPA allowing three times as much of the neurotoxin at the tap as FDA allows in a bottle. EPA’s regulations only cover water coming from municipal, public sources — there are no federal regulations from well water, which is less likely to contain lead but can be contaminated with arsenic and other heavy metals naturally found in soil, or nitrates from nearby farming operations.

Drinking water experts who have spent their careers researching and thinking about toxics in water say there is no perfect way to decide which source of water is healthier. In many cases, it comes down to which chemical each individual consumer is most worried about.

"I don’t have any good news," said Ronnie Levin, a former EPA staffer who now manages the water and health program at Harvard University’s T.H. Chan School of Public Health and is an expert on lead issues. "Unfortunately, it’s like a lot of risks people take, you use your intuitive gut about it, because there’s nothing really scientific to tell you which is better."

Levin lives in an old house in a Boston suburb. She hasn’t had her own tap water tested but knows her town has a lot of old lead pipes, so she uses a reverse osmosis filter to mitigate the risk.

A reverse osmosis filter — which can cost thousands of dollars — uses pressure to force water through a semipermeable membrane. Considered by many to be the gold-standard of at-home filtration options, the system blocks contaminants larger than water molecules, but those that are smaller, like polynuclear aromatic hydrocarbons, can still get through.

"I don’t want people to know what filter I use and think that’s the safest thing to do," she said. "It all depends on where you live and what you’re concerned about."

Consumer Reports senior scientist Michael Hansen agrees. He drinks unfiltered tap water in his New York City home, in part because he knows the aquifer where the city gets its water is pristine.

"If you’re in an area where you are concerned about an acute lead problem, I might buy bottled water, but you’d have to be pretty well-off to keep it up," he said.

E&E News asked a half-dozen water experts what they drink, and most rely on tap water, albeit with expensive filters. Many are worried about the waste from bottled water, and the possibility that plastic bottles themselves could be leaching still-more contaminants.

“Bottled water isn’t necessarily any safer or purer than the water coming out of your tap.”

"Bottled water isn’t necessarily any safer or purer than the water coming out of your tap," said Erik Olson, the Natural Resources Defense Council’s senior strategic director for health and food, who drinks tap water in his Virginia home outside of Washington and researches the tap water of places he’s traveling to before deciding whether or not to opt for bottled water.

Asked about concerns that bottled water is often repackaged tap water, the International Bottled Water Association said while some of its members "use public water sources for their purified bottled water products," that is "not ‘just tap water in a bottle.’"

"Once the tap water enters the bottled water plant, several processes are employed to ensure that it meets the standard for purified water in the U.S.," the IBWA said. The group said its members "take consumer health and safety very seriously," which is why the IBWA decided not to wait for FDA and set its own voluntary standards for two per- and polyfluoroalkyl substances, PFOS and PFOA, that are more stringent than state laws and EPA’s health advisory level.

Both tap and bottled water have been found to contain other types of PFAS.

The organization also pushed back against claims that plastic bottles themselves could be leaching chemicals into water, saying those claims are "inaccurate, misleading and only serve to create unnecessary alarm among consumers" and noting that food packaging materials are scrutinized by FDA.

Yanna Lambrinidou, founder of Parents for Nontoxic Alternatives, was the only drinking water expert E&E News interviewed who does not drink tap water. Her daughter was an infant during Washington’s lead in drinking water crisis, and the family only avoided a potential health tragedy because their pediatrician, who had been treating another child with severe lead poisoning from drinking water, warned them to avoid it years before The Washington Post uncovered the issue.

The experience shattered Lambrinidou’s faith in public water. Her family now uses a reverse osmosis filter on their tap for cooking but buys 5-gallon glass bottled water for drinking — in part because of her concerns about plastic.

"I cannot separate the choices we make in our household from the fact that we lived through the nation’s worst lead in water crisis," she said. "It was such a violation, such a crossing of a line. I really admire people who are able to overlook it and then go back and place their children in the hands of the same system, but I am not one of those people."

Lambrinidou acknowledged that there could well be unregulated contaminants in the bottled water her family drinks, saying she knows it comes from an aquifer in the Midwest but hasn’t tested it. Still, she said, she has "decided to trust it."

Experts cautioned that not all water filters are created equal — and the cheapest ones can bring in their own contaminants. Pitcher filters, an easy choice for those renting or who don’t want to augment their own faucets, can introduce microplastics to water that sits in them over long periods of time. They come in plastic and glass, but the glass ones are often more expensive.

"It’s a valid concern," says Judith Enck, who led EPA Region 2 under the Obama administration and now advocates reducing use of plastics. She cautioned that PVC pipes used by many municipalities to replace lead ones could also possibly leach more microplastics into tap water but said the priority should be removing lead pipes.

Enck uses tap water for all of her needs and avoids plastic whenever possible — even using a glass bottle for her soda stream to make seltzer. Still, she notes, microplastics — which can move through the body’s stomachs and enter peoples’ circulatory system — are present in tap water, too. There are no EPA or FDA standards for microplastics in drinking water, though California in 2018 decided to start monitoring for microplastics in tap water by 2021.

“The answer is not consumer awareness, but much better government.”

"It’s just impossible for consumers to follow every single detail," she said. "The answer is not consumer awareness, but much better government."

Olga Naidenko, who leads the Environmental Working Group’s research on children’s environmental health, uses a BPA-free plastic pitcher with a carbon filter because she’s most concerned about disinfection byproducts coming from her tap. Carbon filters remove some lead, but not as much as reverse osmosis filters, which are more expensive.

"If I was planning to have children, or lived with small children, I might look for the most advanced lead filter on the market, but that’s not the case for me," she said.

While reverse osmosis filters remove more contaminants than the filter Naidenko has, they waste a lot of water, which can be a concern in the D.C. area where water rates are high, or in drought-ridden areas like California. She says she would only use bottled water if she was worried about a certain contaminant, like PFAS, that a filter could not address. But she’s more worried about the environmental waste of disposable bottles than the water contained in them.

"There is no perfect solution," she said. "And so the question is what do you feel most comfortable with and, for me, what in the bigger picture, including any waste, will have the most beneficial impact?"

Many of the drinking water experts E&E News spoke with said they were reluctant to share which filters they use on their tap water because most people cannot afford the extra expense. It’s not fair, they say, that individual consumers have to navigate these questions on their own, often with no good solutions.

For example, Lanphear’s recent research has found that fluoride, which is added to many public drinking water systems in the United States, can have neurotoxic impacts on kids. He now advises pregnant women and mothers of infants not to drink fluoridated water. But he’s uncomfortable with the fact that his solution is "you’re proposing people spend a lot of money on bottled water over 9 months, or pay hundreds of dollars for a filter."

"It’s an environmental justice issue," he said, noting the same is true of many contaminants, like lead, which is disproportionately present in homes of poor people and families of color.

Lambrinidou agreed. While her family was able to protect itself at home from Washington’s lead crisis, she knows many families who didn’t know enough to do so before the contamination was revealed.

"Everyone is operating a little bit in the dark, and then deciding for ourselves what our priorities are and how to weigh out the uncertainties," she said. "And all of that is happening when you have major disparities in people’s abilities to conduct their own research and afford solutions."

Olson agreed. The federal government, across the board, he said should be working to make water safer to drink, be it through stricter regulations from EPA or more funding from Congress.

"Clearly the answer is not every man, woman and child for themselves trying to read fine print about the contaminants in their bottled water versus tap water," he said.