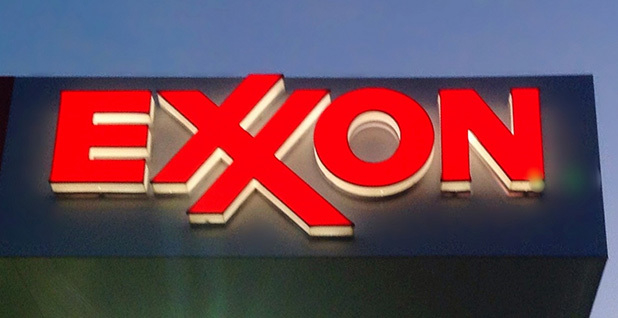 Exxon Mobil Corp. shareholders vote today on a resolution urging the company to disclose the risks it faces from climate change. Up to seven other resolutions on climate and the environment could also receive votes. Photo by Mike Mozart, courtesy of Flickr.

DALLAS — For years, Exxon Mobil Corp. has held its annual meeting here in a cavernous symphony hall downtown, where shareholders today will discuss the company’s future and cast their ballots on more than a dozen proposals.

But while the location hasn’t changed, the mood outside Exxon has shifted dramatically — particularly on global warming. The company is grappling with low oil prices and investigations from attorneys general into allegations that it downplayed the economic threat of climate change — and today will face a raft of resolutions demanding that it acknowledge and tackle rising temperatures.

"Folks perceive them to be a leader in the fight against addressing climate change," said Danielle Fugere, president of the As You Sow nonprofit group, one of several that submitted resolutions to Exxon.

"They are the face of the anti-climate movement. And I think that’s why we see so many resolutions against Exxon," Fugere said.

"They’re such an easy target, but they make themselves an easy target," added W. Andrew Mims of the Sustainability Group, a division within Boston-based investment house Loring, Wolcott & Coolidge.

Of the 14 resolutions before Exxon, eight deal with global warming or environmental controversies, such as hydraulic fracturing. They prod the oil giant to acknowledge that insurgent energy sources and climate regulations — namely those agreed to by most of the world’s nations under the Paris Agreement — threaten its existence.

Boards of directors typically oppose shareholder resolutions, which rarely pass without support from the board. Exxon opposes all the resolutions slated to be voted on today and petitioned the Securities and Exchange Commission to keep one climate resolution off the ballot.

As of last night, environmental demonstrators protesting Exxon’s track record on climate change and calling for the sale of company stock were preparing for a rally this morning outside the symphony hall. Nearby they made room for an ice block to be carved with the phrase "#ExxonKnew," a reference to the revelation that company scientists warned Exxon management of climate change risks decades ago.

Exxon spokesman Alan Jeffers said in an interview that there are more resolutions than are typical for annual meetings.

He said Exxon addressed questions from shareholders about climate policies, their possible effect on business, changes in energy demand and "carbon asset risk" in a report issued in 2014.

"The risk of climate change is clear and the risk warrants action," reads one of Exxon’s statements on climate change. "We have the same concerns as people everywhere — and that is how to provide the world with the energy it needs while reducing greenhouse gas emissions."

Past may be prologue, but shareholders are optimistic

In the wake of the international accord on climate change struck in Paris in December, the number of climate-related shareholder resolutions worldwide hit an all-time high.

The strategy behind such advocacy is simple: to use one’s financial stake within a company to raise an issue and lobby for changes.

Though resolutions are typically nonbinding, the variety of proposals filed in a given year and the amount of support they receive provide good indications of investor sentiment.

"They’re really just sensible risk management," Edward Mason, head of responsible investment at the Church Commissioners for England, said of those past policies.

For its part, Exxon projects oil demand worldwide will continue to grow, expanding by more than 13 percent from today’s figures by 2040.

Yet one of the International Energy Agency’s forecasts — a circumstance in which governments cap greenhouse gas emissions — estimates oil demand could fall by more than 20 percent by 2040.

While Exxon has never passed a resolution related to climate change, shareholders worried about global warming are optimistic that today will be different.

"The world is changing; the world is starting to adapt," said Andrew Logan of Ceres, the sustainable investment advocacy group. What investors are asking for, he said, "seems astonishingly modest."

CalPERS tries to wield its $1B in influence

To meet the goals reached in Paris to limit warming to no more than 2 degrees Celsius beyond preindustrial temperatures, carbon fuels will have to remain untapped, said Anne Simpson of the California Public Employees’ Retirement System (CalPERS), which invests about $300 billion.

"You can’t burn everything that’s on these companies’ balance sheets," Simpson said.

As the biggest U.S public pension fund, CalPERS owns about $1 billion in Exxon stock and is backing a resolution that would compel the company to commission a report on the long-term "impacts of public climate change policies" on its business.

CalPERS is also backing a proposal for "proxy access" — authored by New York City Comptroller Scott Stringer, the fiduciary for the city’s five public pension funds, worth more than $150 billion — that would allow shareholders to nominate candidates to the Exxon board.

Stringer’s office has targeted dozens of fossil fuel companies this year and last with this strategy, specifically citing climate concerns.

"Investors would benefit from an assessment of ExxonMobil’s oil and gas reserves under a scenario consistent with the global emissions reduction target defined in the Paris Agreement," Simpson and Stringer told Exxon shareholders in a letter.

Other climate resolutions on the table call for Exxon to have a climate change expert on its board and to finalize a policy "acknowledging the imperative to limit global average temperature increases to 2 degrees above pre-industrial levels."

In an attempt to encourage markets to value oil suppliers like Exxon and "think outside the barrel," Fugere submitted a proposal that would require the oil giant to report its energy reserves in units of energy — British thermal units — instead of barrels of crude.

"They have actually been at least slightly supportive of the concept," said Fugere, who called that reaction surprising.

Please leave your name with the secretary

Investors who have filed resolutions with Exxon for years described the oil giant as a savvy, well-run company whose leaders understand the financial and reputational risks of climate change and who are willing to meet to discuss shareholder proposals but often disagree.

They also describe Exxon as a difficult but rewarding hurdle — a company whose support of climate policies could trigger broader acceptance and awareness throughout the energy industry and among investors of the financial risks that climate change poses. The challenge and the potential payoff, they said, are what motivates them to turn in resolutions year after year.

Tim Smith is a director of shareholder engagement at Walden Asset Management, a Boston investment firm, who has been working on shareholder advocacy since the 1970s. He said that in the last few years, Exxon officials have met for the better part of a day in New York with 25 to 30 shareholders to talk about climate issues. "Not just a dog-and-pony show," he said.

But four stockholders said Exxon does not allow them to talk with board members directly, a practice they find frustrating.

"That’s not normal. Usually you can have access in some way to the board," said Mike Crosby, a Franciscan friar from Milwaukee who began his corporate engagement career in 1973 at the Interfaith Center on Corporate Responsibility (ICCR).

Sister Patricia Daly, a nun from New Jersey who is famous within shareholder advocacy circles and is a colleague of Crosby’s, agreed.

Jeffers said the board set that policy. "It’s inaccurate to say the company has a policy," he said.

A priest and a nun walk into a shareholders meeting

The shareholder advocacy world is small and traces much of its history back to groups like the ICCR, a group of several hundred religious institutions that together oversee $100 billion in assets.

While they each direct small sums of company stocks compared to Wall Street firms or mainstream asset managers, Father Crosby, Sister Daly and Smith are widely known by name and history.

The trio are perennials at corporate meetings, each with decades of experience filing proposals and working on matters of the environment, human trafficking, health, water use and other subjects.

"We regularly engage with them and look forward to that," Exxon’s Jeffers said of Crosby and Daly.

"She’s been a visionary leader in identifying issues of social and environmental concern," Ford Motor Co. Executive Chairman Bill Ford said of Daly in 2014. They worked together on environmental sustainability at the automaker.

"Pat is my candidate for sainthood," said Stephen Viederman, a shareholder engagement expert in New York.

"Pat was identified as an RN at one point. A ‘radical nun,’" he said, before chiming in again: "Oh! Father Mike is great. He, too, could be saint."