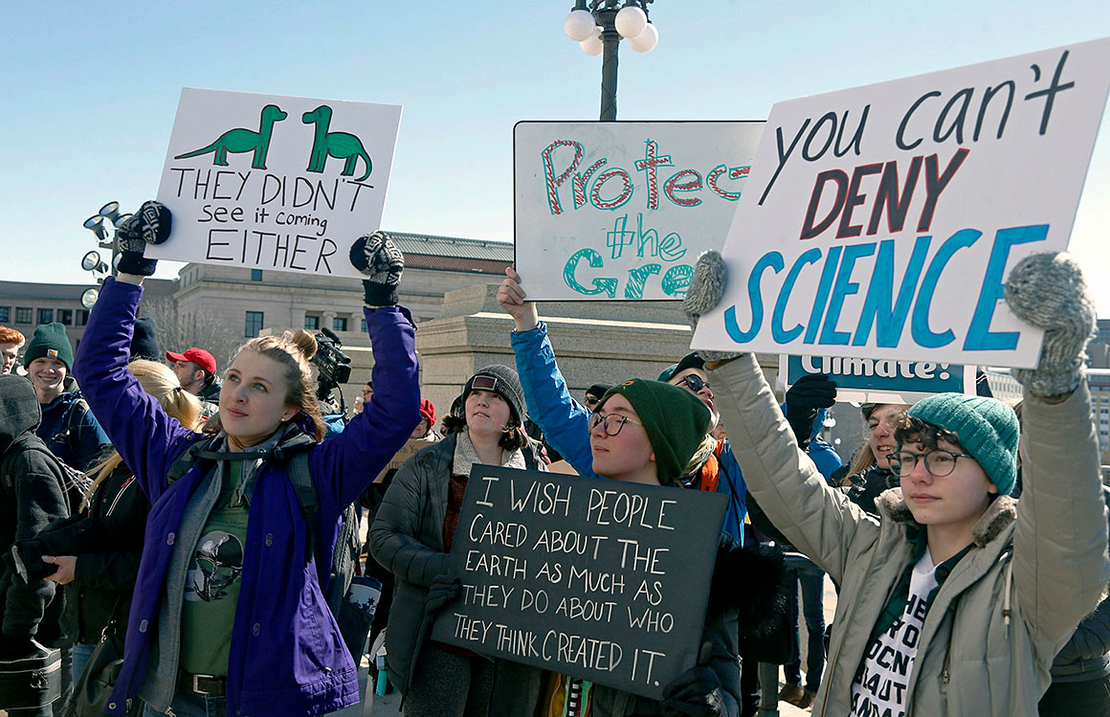 Around 1,000 Minnesota students skipped school to gather on the steps of the state Capitol in 2019. AP Photo/Jim Mone

A secret recording of an Exxon Mobil Corp. lobbyist has surfaced in climate change litigation against the oil giant.

A group of academics and climate activists cited the video in a "friend of the court" brief filed late yesterday in Minnesota’s climate lawsuit against Exxon and other fossil fuel companies in the 8th U.S. Circuit Court of Appeals.

McCoy, who thought he was applying for a new job, told the Greenpeace activists that the oil supermajor has relied on "shadow groups" to deny the scientific consensus on global warming.

"From 1998 through 2019, Exxon spent at least $37 million funding 69 organizations that … denied and discredited climate science," the brief says.

"In June 2021, Exxon lobbyist Keith McCoy admitted to as much when he stated that the company ‘aggressively’ [fought] against some of the ‘science’ by using third-party ‘shadow groups.’"

The authors of the brief included Geoffrey Supran and Naomi Oreskes, two Harvard University researchers who published a recent paper asserting that Exxon has deflected blame for global warming onto individual consumers (Energywire, May 14).

The recording of McCoy is "a really important new data point" in the history of Exxon’s efforts to delay climate action, Supran said in an interview with E&E News.

"It’s the first time, to my knowledge, that an Exxon insider has admitted to a lot of the company’s history of malfeasance," Supran said. "And it’s been a window into the ongoing nature of their efforts to misrepresent climate science."

Also signing the brief were Fresh Energy, a Minnesota-based organization that advocates for clean energy; the Center for Climate Integrity, a Washington-based think tank that supports climate litigation against fossil fuel firms; and the Union of Concerned Scientists, a national environmental group.

A spokesperson for the Center for Climate Integrity confirmed to E&E News that the brief marks the first time that McCoy’s comments have been cited in climate liability litigation.

Minnesota Attorney General Keith Ellison (D) originally filed suit against Exxon, Koch Industries and the American Petroleum Institute last summer. His complaint alleges that the defendants misled the public about the dangers of global warming for decades to "pad their own pockets" (E&E News PM, June 24, 2020).

Since 2017, five states and more than a dozen municipalities have filed similar climate liability cases, including Massachusetts, Rhode Island and Washington, D.C.

So far, the lawsuits have been tied up by procedural wrangling over whether they belong in state or federal court. Lawyers for the oil companies have fought to have the cases heard in federal court, which is seen as a friendlier venue for the fossil fuel industry.

In their own brief filed yesterday, 17 Democratic attorneys general wrote that Minnesota’s climate liability case should be heard in state court because the claims arise under state law.

"We believe a price on carbon emissions is essential to achieving net zero emissions," Woods said in a statement. "Carbon pricing would send a clear signal through the market, creating incentives to reduce emissions, fostering investment in R&D to advance solutions and providing consumers with transparency to make the best choices."

Still, Exxon was suspended earlier this month from the Climate Leadership Council, a centrist group known for its support of a carbon fee and dividend proposal (Greenwire, Aug. 6).

Rep. Ro Khanna (D-Calif.), chair of the Oversight and Reform Subcommittee on Environment, has also warned that top Exxon executives could be subpoenaed if they refuse to testify before his panel (E&E Daily, July 1).

Meanwhile, Energy in Depth, a research and outreach campaign run by the Independent Petroleum Association of America, has criticized Supran and Oreskes, the Harvard researchers who signed the brief in Minnesota’s climate liability case.

In a May blog post, William Allison, a spokesperson for Energy in Depth and a senior director at FTI Consulting, wrote that "neither Oreskes nor Supran are objective researchers, but rather self-proclaimed participants in the climate litigation campaign."

Asked to respond to these allegations, Supran said that the post "accuses us of being activists as though that’s something to be ashamed of. But we are proud to be activists. Active in doing what we can to address the climate crisis, and active in uncovering the truth about the fossil fuel industry’s decades of denial and delay."