Exxon’s own models predicted global warming. It ignored them. 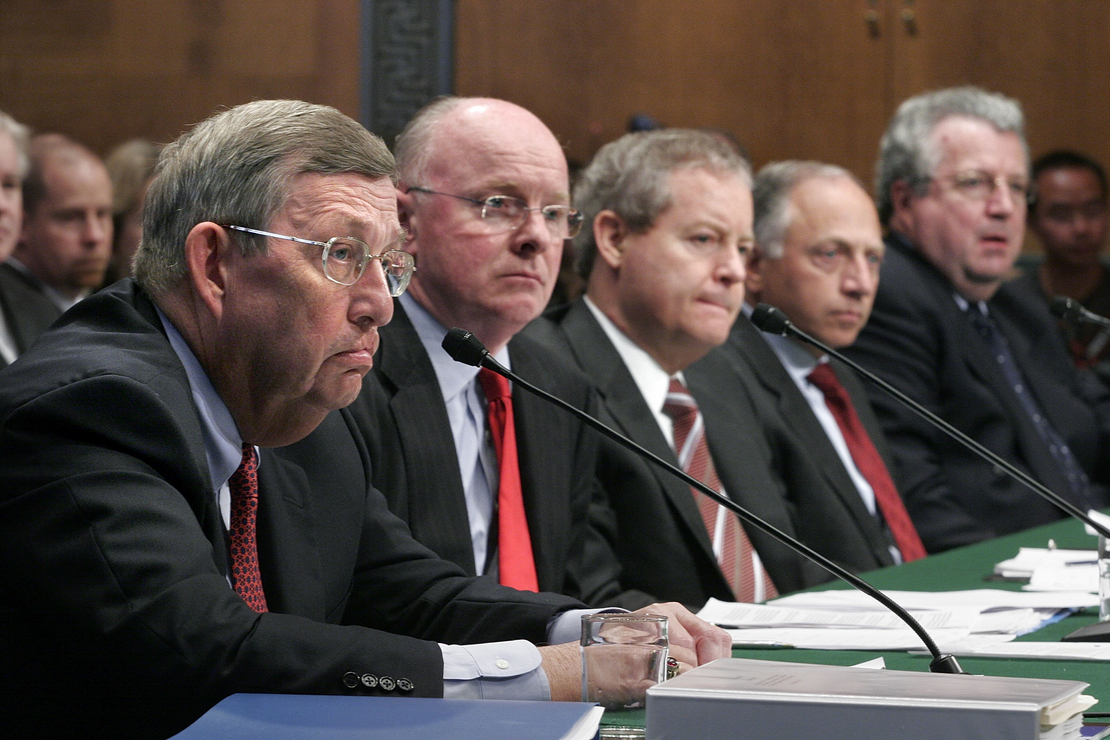 Lee Raymond (left), then-chair and CEO of Exxon Mobil Corp., testified before a Senate committee with other oil executives in 2005. Raymond once famously described the evidence of climate change as being "inconclusive." Chip Somodevilla/Getty Images

It’s been seven years since journalists first revealed Exxon Mobil Corp.’s decadeslong efforts to undermine the scientific certainty around climate change, despite knowing how serious a problem it was.

Now, a new analysis demonstrates exactly how much the company knew — and how its public disinformation campaigns sabotaged the warnings of its own scientists.

Exxon wasn’t just aware of the greenhouse effect. It had its own teams of scientists developing models to project the effects of carbon emissions on the global climate. And those models, it turns out, were highly accurate.

“We have our scientists do good science, but we have our corporate board not listening,” Ed Garvey, who worked on climate science for Exxon in the late 1970s, said in an interview.

The analysis, published Thursday in the journal Science, captures that sentiment. Exxon’s models matched state-of-the-art simulations being used by academic scientists at the same time period. And the company’s predictions accurately foresaw the warming that’s actually occurred since the 1970s, according to the study written by researchers Geoffrey Supran, Stefan Rahmstorf and Naomi Oreskes.

The findings deepen Exxon’s reputation for climate disinformation. And they may carry legal consequences as well, by becoming evidence in litigation that could cost the fossil fuel industry hundreds of billions of dollars. Two dozen U.S. cities, counties and states are suing Exxon and other energy companies in an attempt to show that they misled the public about their contributions to climate change.

The company says its critics are wrong and that the findings show only that its scientists were keeping pace with evolving climate research.

Spokesperson Todd Spitler said Exxon’s climate research led to nearly 150 papers, including more than 50 peer-reviewed publications that the company made available to the public.

“Exxon Mobil’s understanding of climate science has developed along with that of the broader scientific community,” Spitler said. He added that “this issue has come up several times in recent years, and in each case, our answer is the same: Those who talk about how ‘Exxon Knew’ are wrong in their conclusions.”

He said the company is “committed to being part of the solution to climate change and the risks it poses.”

But attorneys for the parties suing fossil fuel companies suggested the study would help make the case that Exxon knew its products were contributing to global warming and sought to blur the facts.

“It moves the conversation from ‘Exxon knew that global warming was real’ to ‘Exxon was internally generating the same predictions about global warming as the climate science it was publicly disparaging,’“ said Niskanen Center chief legal counsel David Bookbinder, who represents several Colorado communities that are suing the industry.

The research, he added, “should have a significant impact on a jury.”

The lawsuits have been mired in procedural wrangling for years as the companies try to move the cases from state courts to the federal bench, where the companies believe the cases are more likely to be tossed out.

Most of the cases were filed under state consumer protection laws, and appellate judges from Rhode Island to Hawaii in 2022 rejected attempts to quash the liability lawsuits. The industry has petitioned the Supreme Court to step in, saying that the lawsuits pose a “massive monetary liability” to the companies.

The litigation has been compared to legal battles waged against the tobacco industry, which culminated in 1998 in a $206 billion settlement (Climatewire, March 10, 2021).

The study notes that Oreskes, a lead author of the paper who has become a lightning rod for her work on climate disinformation within the energy industry, has served as a paid consultant to Sher Edling LLP, a San Francisco-based law firm that represents multiple challengers in the climate liability suits. Exxon had accused Oreskes in the past of failing to disclose what it called a “blatant conflict of interest.”

The law firm “played no role in this or any other study by the authors (including but not limited to study conceptualization, execution, writing, or funding),” the study said.

Sher Edling said Oreskes was paid for 3.5 hours of consulting in 2017 and has not done any work for the firm since.

Alyssa Johl, vice president for legal at the Center for Climate Integrity, which supports the climate lawsuits, said the research “reaffirms and reinforces” two areas critical to the lawsuits.

Exxon knew, “with startling accuracy, how fossil fuels would drive the climate crisis,” Johl said. And the study shows “that Exxon executives actively concealed and denied what their own scientists were telling them,” she said.

She added that if “the next time Exxon’s lawyers falsely claim the company didn’t have this knowledge, or was unaware of the damage their products would cause, they’ll have to contend with a peer-reviewed study showing those statements to be lies.”

The new analysis has its origins in a distinctly modern phenomenon: a viral tweet.

Several years ago, study authors Supran and Oreskes, then working together at Harvard University, published a paper on Exxon’s climate communications strategies. It caught the attention of Rahmstorf, a climate scientist at the Potsdam Institute for Climate Impact Research. He noticed a graph in the paper visualizing some of the company’s own climate projections — and he decided to do some investigating.

Rahmstorf took the graph and overlaid it with real-world temperature observations to see how well the projections had actually performed. They turned out to be a startling match.

“I think he was just taken aback by the overlap,” said Supran, who is now an associate professor of environmental science and policy at the University of Miami. “He reached out to us, and he tweeted about it.”

Climate Twitter took over from there. The results began widely circulating, with other scientists sharing similar findings. And the idea for a more in-depth analysis was born.

“There was like this penny-drop moment where, despite all the scrutiny on Exxon’s climate rhetoric by us and others, we realized the company’s actual climate projections, their actual data, had just been hiding there in plain sight,” Supran said. “So, in essence, we decided to make a peer-reviewed version of that Twitter meme.”

Supran, Rahmstorf and Oreskes combed through dozens of internal company documents and peer-reviewed scientific papers published by Exxon scientists between 1977 and 2003. In the end, they found 16 individual temperature projections published by Exxon — most of which came from models developed by researchers within the company. Twelve of these projections were unique from one another.

They were highly accurate, the analysis found. Ten of the projections closely matched the actual warming of the planet.

The projections were also similar to those produced by academic models of the time. In other words, they were just as good — and sometimes better — than the best models used by independent scientists.

And while there’s always some uncertainty built into climate model projections — a margin of error, so to speak — none of Exxon’s projections suggested any possibility of a future in which there was no global warming.

“Actually it’s a pretty shocking level of skill and accuracy with which they were predicting global warming,” Supran said. “Especially for a company that then spent the next couple decades denying climate science.”

The analysis demonstrates, quantifiably, that Exxon’s research was at odds with its public communications on climate change.

Exxon for years publicly touted uncertainties in climate science, including the question of whether human-caused warming was occurring at all. But its own models indicated that warming from greenhouse gases was beyond question. The company has also challenged the reliability of climate models, when its own projections were turning out to be highly accurate.

In his 2012 book “Private Empire: ExxonMobil and American Power,” journalist Steve Coll documents the efforts of Lee Raymond, the legendary Exxon CEO who led the company from 1993 to 2005, to fight climate science.

In 1997, as the Clinton administration entered final negotiations over the Kyoto Protocol, a global agreement to slash greenhouse gases, Raymond flew to China to give a speech questioning the need to cut emissions.

“It is highly unlikely that the temperature in the middle of the next century will be affected whether policies are enacted now or 20 years from now,” Coll quotes Raymond as saying.

A quarter-century later, Exxon executives now acknowledge the science of a warming planet. The company released a plan last year to achieve net-zero emissions from all the assets it owns and operates. But the pledge does not include emissions from oil and gas burned by Exxon’s customers, which accounts for the vast majority of greenhouse gases associated with the company (Greenwire, Jan. 18, 2022).

Exxon has also begun to make investments in low-carbon technologies. In December, the company said it plans to invest $17 billion on technologies like biofuels, hydrogen, and carbon capture and sequestration by 2027.

“Regardless of what you think about oil companies or what they say their intent is, it’s always worth following the money,” said Alex Dewar, an analyst who tracks the oil industry at Boston Consulting Group. “While that is a small share of their overall capital, that is an increasing number and an important signifier of where they are headed.”

Exxon’s new strategy is in line with other U.S. oil companies, many of which have focused on technologies that align with existing business plans, assets and expertise. That stands in contrast to major European oil companies, which are investing heavily in areas outside their traditional business models, like renewable energy and electric vehicle charging technologies.

The new analysis underscores the historical disconnect between Exxon’s climate scientists and its public affairs strategies — what Garvey, the former Exxon scientist, described as a corporate “two-headedness.”

Garvey was hired for a research project to collect direct measurements of carbon dioxide in the ocean and atmosphere. He wasn’t a climate modeler, but the work was closely related to the company’s modeling efforts. It was aimed at determining how much carbon the ocean absorbs from the air — a process that can lessen the warming impact of airborne emissions.

The company didn’t attempt to steer or direct his team’s research in any way, said Garvey, who’s now a research scientist and lecturer at Columbia University. The scientists were left to conduct their projects, and produce the best science, as they saw fit.

Garvey left Exxon after a few years, when his project was discontinued. He completed his doctorate at Columbia and would later consult for EPA. He didn’t follow much of the company’s scientific research after his departure — but he did notice its climate-denying advertisements over the years.

“I wasn’t at all surprised,” he said. “I was very disappointed because I knew the quality of the science that was being done.”