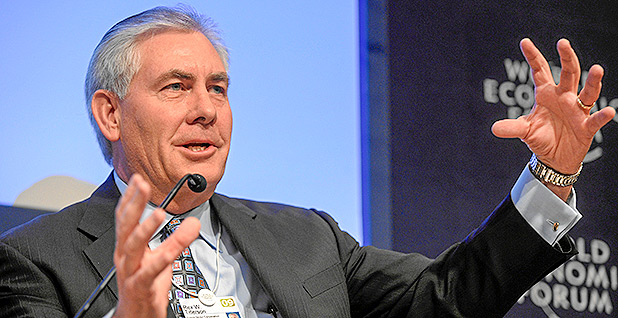 Two months before President-elect Donald Trump selected Exxon Mobil Corp. CEO Rex Tillerson to be his secretary of State, lawyers for Exxon sued the government for $1.3 billion in back taxes.

It’s one of at least six lawsuits Exxon has filed over the last 27 years in an effort to lower its U.S. tax bill.

Since Trump made Tillerson his pick for State, the former CEO has been scrutinized by both sides of the aisle in Congress for his company’s positions on climate change and its ties to Russia. But Exxon’s long-term approach to taxes paints a new picture of hard-nosed tactics the company and Tillerson have used to push Exxon’s agenda around the world — a combination of lawsuits, political lobbying and a broad public relations campaign.

Exxon’s tax disputes could create another entanglement as Tillerson tries to shed any potential conflicts of interest after leaving Exxon. Tillerson has disclosed assets worth as much as $400 million, including at least $150 million in Exxon shares. Heading into his first Senate confirmation hearing tomorrow, Tillerson has agreed to sever financial ties with Exxon by cashing out 611,000 shares.

The company’s taxes are under review in 11 foreign countries, and its 2015 annual report showed at the time it reported $9.3 billion in "unrecognized tax benefits" that could come back to the company if it wins its tax cases.

Exxon has also lobbied for decades to hold onto and expand tax breaks for the oil industry, even as the U.S. government has advocated to eliminate those subsidies at home and abroad.

As the world’s biggest publicly traded oil company, Exxon pays billions of dollars in taxes to the United States and foreign nations each year. And each year, Exxon attorneys and accountants try to shrink the company’s tax bill as much as possible.

Exxon’s willingness to sue seems to separate it from other companies. The six lawsuits that E&E News found through online searches covered 16 of Exxon’s last 40 tax years, and the lawsuits Exxon starts can drag on for decades.

Cumulatively, the company has asked for $11.2 billion in back taxes and interest.

In most of the cases, Exxon disputed how the IRS calculated taxes on its foreign operations, along with the IRS’s treatment of several well-known tax breaks for the domestic oil industry.

"When you see a repeated pattern in which a company is engaged in litigation, that could suggest that the company is aggressively pushing the envelope in its use of tax avoidance mechanisms," said Matthew Gardner, executive director of the Institute for Taxation and Economic Policy, a Washington, D.C.-based tax research group that favors corporate tax reforms.

Court records aren’t clear about how all those cases ended, but Exxon has won some prominent decisions.

In the biggest case, filed in 1990 before Exxon Corp. merged with the Mobil oil company, Exxon asked for $7.9 billion. The biggest point of contention involved how to tax Exxon’s production from its share of Saudi Arabia’s national oil company, Saudi Aramco.

Starting in 1979, the Saudi government capped the sales price that Exxon and other companies could collect on the country’s oil, in an effort to stabilize rising world prices. The IRS alleged that Exxon and other companies, including Mobil and Texaco Inc., reaped an unfair benefit by selling the cheap oil to their own refining subsidiaries but not passing along the savings to consumers.

Exxon and the other companies won a 1993 trial in U.S. tax court, and Exxon was awarded $2 billion. The company spent decades in court arguing with the IRS about how to calculate the interest on the claim; the case wasn’t fully resolved until 2012, according to court documents.

In 2003, Exxon announced it had recovered $2.2 billion in back taxes from the IRS. That dispute involved the IRS’s calculation of the depletion allowance for some of Exxon’s gas production from 1974 to 1990. The depletion allowance, created in 1926, allows companies to deduct a percentage of an oil or gas well’s revenue from their tax bill. Since oil and gas prices fluctuate, companies can sometimes deduct far more than what it actually cost them to drill the wells.

The tax allowance was phased out for the major oil companies in the 1970s, but Exxon argued successfully that it was producing gas under long-term contracts that were written before the tax rules changed.

The 2016 suit involves how the IRS calculated taxes on payments Exxon made to the governments of Qatar and Malaysia, along with tax credits it receives for blending alcohol into gasoline. The IRS hasn’t yet filed a response to the suit, and a spokeswoman for the agency said it cannot comment on litigation.

In an email, Exxon spokesman William Holbrook declined to answer detailed questions about the company’s tax positions but said that its efforts to minimize taxes are legal and common among big corporations.

Companies "have a fiduciary responsibility to their shareholders to ensure that the amounts they are paying are both correct and fair," Holbrook wrote.

Exxon has scrutinized the ins and outs of the U.S. tax code for years and lobbies Congress and the Treasury Department hard on taxes, too. Taxation was Exxon’s first- or second-most lobbied issue every year since 2007, according to a review of records held by the Center for Responsive Politics.

The company spent $8.8 million on lobbying in the first 11 months of 2016 and has lobbied the State Department on issues including international trade deals, Russian sanctions and the Keystone XL pipeline (Greenwire, Dec. 6, 2016).

"Exxon, in particular, is a powerhouse in terms of just the phenomenal amount of money that they spend on lobbying and campaign contributions," said Michael Surrusco, an analyst for the nonprofit group Taxpayers for Common Sense.

In 2011, Tillerson himself testified in favor of maintaining the status quo when the Senate was considering a Democratic plan to repeal some of the oil industry’s tax breaks.

"It is not simply that [the proposed tax changes] are misinformed and discriminatory, they are counterproductive," Tillerson wrote in his prepared testimony (E&E Daily, May 11, 2011).

That stance could put Tillerson at odds with U.S. policy as secretary of State. The U.S. government agreed to phase out fossil fuel subsidies in 2009, along with other nations that are part of the Group of 20 forum of industrial and emerging-market nations. The United States’ G-20 negotiations are overseen by the Treasury Department, but the State Department has a seat at the table at the meeting of the world’s major economies.

Tillerson will also play a direct role in carrying out the 2015 U.N.-sponsored Paris climate agreement. The United States and 194 other countries promised to cap their emissions of heat-trapping gases in order to keep the average global temperature from rising more than 2 degrees Celsius above preindustrial levels.

The countries that signed the agreement are scheduled to review their progress in 2018 and revise their emissions reduction pledges in 2020 (Greenwire, Dec. 12, 2015).

At State, Tillerson may have to negotiate climate change policy in countries where Exxon now has ongoing tax cases. The company is trying to recover money in nations including Australia, Equatorial Guinea, Malaysia, Nigeria, Qatar, Russia and the United Kingdom, according to its latest annual report to the U.S. Securities and Exchange Commission.

Exxon has come under fire for the hard line it took on climate change under Tillerson’s predecessor, Lee Raymond. Exxon moderated its stance when Tillerson took over in 2006, acknowledging that human activity plays a role in warming. But the company maintains that oil and gas will be the dominant fuels through 2040, particularly in rapidly developing economies such as India and China.

There’s a chance that Tillerson could rise above the entanglements, said Joseph Aldy, a former White House aide on energy and climate change issues who is now an associate professor at Harvard University’s John F. Kennedy School of Government.

"Does having the head of one of the largest oil companies in the world affect our ability to engage on this? Maybe," Aldy said. "Maybe we end up being lucky, we get someone who ends up being pretty thoughtful."