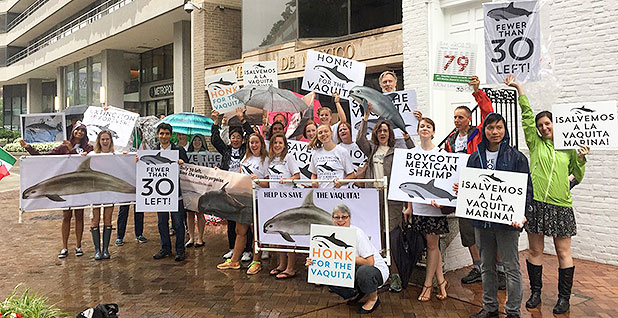 Supporters of the Center for Biological Diversity rallied outside the Mexican embassy in Washington earlier this month. The group has registered as a lobbying organization. @CenterForBioDiv/Twitter

One of the Interior Department’s most frequent sparring partners in court has now added congressional lobbying to its arsenal.

In a filing that foreshadows Capitol Hill fights to come, the Center for Biological Diversity has registered the organization as a lobbying entity. Until now, the group has been known for filing myriad lawsuits over the Endangered Species Act and related issues.

"The level of threats has grown exponentially with [President] Trump, so we had to ramp up our congressional work a lot," Brett Hartl, the organization’s government affairs director, said in an email today.

Pointedly, one specific threat targets the kind of legal fees the center has been awarded in lawsuits.

Hartl is one of six Center for Biological Diversity staffers identified as lobbyists in the July 18 registration statement. Prior to joining the center, Hartl worked for the House Natural Resources Committee on the Democratic staff. Three of the other newly registered lobbyists are attorneys.

Size-wise, the lobbying effort is starting off modestly. The center reported lobbying expenditures of $9,533 on July 19, which is small change compared with some of its allies in the environmental community.

Some of the center’s identified targets include Trump administration nominees, such as U.S. Court of Federal Claims pick Damien Schiff. Schiff is an attorney with the conservative Pacific Legal Foundation, the center’s polar opposite on environmental issues (Greenwire, June 15).

Schiff, who once called Supreme Court Justice Anthony Kennedy a "judicial prostitute" in a 2007 blog post, is awaiting a Senate vote.

Another lobbying target identified in the registration statement could strike even closer to home for the center, which is identified as a party in hundreds of federal district-level and appellate proceedings since 1997, according to the PACER case database.

Currently, a court can award costs, including attorneys’ and expert witness fees, to private parties in Endangered Species Act lawsuits. The ESA places no cap on hourly attorneys’ fees. Huizenga’s bill would limit the fees to $125 an hour, which is the same cap set in most other circumstances by another federal law, the Equal Access to Justice Act.

"For too long, litigating attorneys representing nongovernmental entities have taken advantage of the Endangered Species Act, raking in millions of dollars in taxpayer-funded money," Huizenga said last week. "In many cases, attorney billing rates have climbed as high as $400, $500 or even $750 per hour."

The Center for Biological Diversity was the "most active" litigant between 2005 and 2014 on lawsuits involving Endangered Species Act deadlines, according to a Government Accountability Office report issued in February. The group filed 41 such deadline suits during the period.

Acting Fish and Wildlife Service Director Gregory Sheehan told the House Natural Resources Committee that while "time and cost of litigation is one of the significant challenges we face in implementing the ESA," officials needed greater clarity in how the legislation would work.

Hartl, in a prior statement, said Huizenga’s bill "would end in disaster by making it harder for citizens to ensure endangered species get the protection they need to survive in a timely manner."