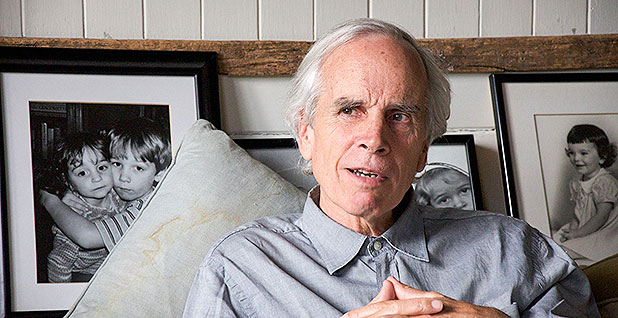 Douglas Tompkins, founder of The North Face Inc., was briefly investigated by the FBI in 1995, according to documents obtained by Greenwire under the Freedom of Information Act. Photo courtesy of Wikipedia.

Tompkins, the founder of outdoor apparel company The North Face Inc. and clothing company Esprit Holdings Ltd. who died in December, came under federal authorities’ scrutiny, albeit briefly, in 1995, according to documents obtained by Greenwire under the Freedom of Information Act.

Tompkins’ file shows that FBI agents collected information on his quest to buy up vast tracts of land to create national parks throughout South America.

The FBI seemed to be assisting the Argentine government, which was investigating Tompkins.

"An official contact of the Legal Attache Office requested assistance in identifying any criminal history for TOMPKINS," said one memorandum, dated June 28, 1995, that requested a search of records at the FBI’s National Crime Information Center.

Another memo dated June 30, 1995, from the FBI’s legal attaché or "legat" in Montevideo, Uruguay, sent to the bureau’s director said an unnamed party was investigating Tompkins’ work in Argentina.

"FOR THE INFORMATION OF FBIHQ, [redacted] ARE CONDUCTING AN INVESTIGATION OF DOUGLAS RAINSFORD TOMPKINS’ ACTIVITIES IN ARGENTINA," said the memo.

Another document hints at Argentina’s interest in Tompkins. A July 3, 1995, letter sent from the legat to a counselor — his or her name redacted — in the Argentine embassy in Uruguay said the bureau found no criminal history for Tompkins.

"Concerning your application, we inform you that no criminal records for Douglas Rainsford Tompkins were found," said the letter, which was in Spanish. "Not enough information was submitted to review the archives of the FBI concerning the foundation known as IRA HITI and [redacted]."

Tompkins founded the Ira-Hiti Foundation, which later became known as the Foundation for Deep Ecology.

The records, heavily redacted and only a few pages long, do not offer an explicit reason for the investigation into Tompkins. A FBI spokesman declined to comment for this story.

But included with the letter to the Argentine embassy was a story from Newsweek about Tompkins’ purchases of land in Chile in order to establish new parks, which angered several in that country. Titled "Firestorm in Paradise," the article noted "an American businessman makes enemies."

Also in the FBI’s file on Tompkins was a Reuters article, written in Spanish, that described efforts by the Chilean government to stop Tompkins from buying up forestland in the country.

The FBI didn’t turn up much on Tompkins, leading the bureau to back off from the inquiry. A memo dated Aug. 15, 1995, and sent to the legat in Montevideo said the matter should be put in "a ‘closed’ status."

"It is recommended that this matter be placed in a ‘closed’ status, inasmuch as the [redacted] were previously advised of the limited information available and additional information is not available from FBIHQ," said the memo.

Tompkins first began his conservation efforts in South America more than 20 years ago when he bought land in southern Chile in 1991 to eventually create Pumalín Park. Now, about 2 million acres in Chile and Argentina are under protection with four parks created and more on the way.

That work falls under Tompkins Conservation. A representative of the group said it did not know about the FBI looking into Tompkins.

"We were unaware of this information and have nothing to add," said Alison Kelman, communications director for Tompkins Conservation.

Tompkins, 72, died during one of his many adventures in the wild. He succumbed to severe hypothermia after a kayaking accident in Chile’s Patagonia region in December last year (Greenwire, Dec. 9, 2015).

His widow, Kris, former CEO of outdoor clothing company Patagonia Inc., carries on his environmental work. In January, she offered 988,500 acres of land in Patagonia to be made into national parks (Greenwire, Jan. 25).

Click here to read the FBI’s records on Tompkins.