FDR built a ‘Great Wall of Trees.’ Could Biden do the same? 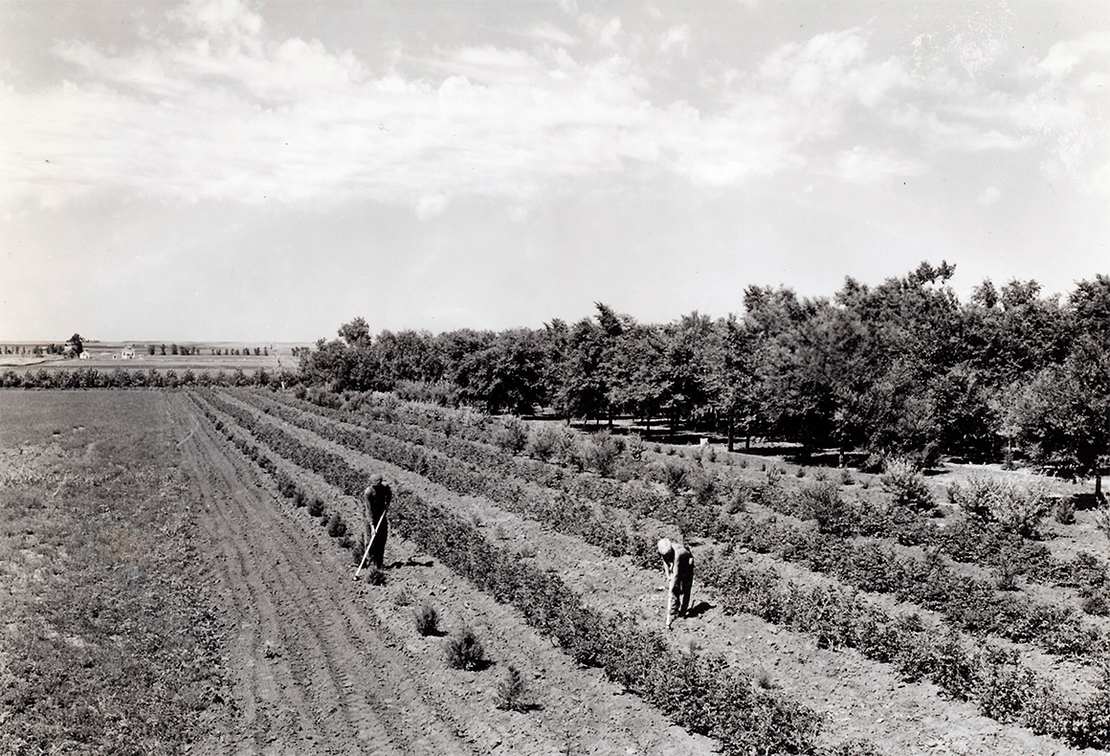 The Prairie States Forestry Project, also known as the "Great Wall of Trees," crossed 33,000 farms in six Great Plains states. Championed by President Franklin Roosevelt, it is recognized as one of the most ambitious forestation efforts in U.S. history. Many of the 1930s- and '40s-era "shelterbelts" are now gone. In this historical photo, farmers work in a field with a windbreak of trees behind them. U.S. Forest Service

The idea seemed crazy. Unemployment was rampant in the mid-1930s, and families across the country needed grains for food. But Roosevelt said the federal government would pay farmers to grow trees in soils stripped bare by the Dust Bowl.

Not just a few trees, but 220 million trees.

By the time the project wrapped up in 1942, the great wall covered 140,000 square miles of farmland from Texas to North Dakota.

“Conceptually it was enormous,” said Joel Orth, associate professor of history at California Polytechnic State University and an expert on 20th-century U.S. agriculture. “When the initial news stories came out, that they were going to build this great wall, everybody was like, ‘God, this is nuts.’ This was in an era when the federal government didn’t do stuff like that.”

And yet it did.

Nearly 90 years later, the Great Wall of Trees remains one of the most ambitious federally funded, landscape-scale adaptation projects in history. Its legacy may live on through the Biden administration's landmark climate bill, the Inflation Reduction Act, which provides tens of billions of additional dollars for climate adaptation and resilience (Climatewire, Aug. 9).

As with the Biden agenda, FDR’s Great Wall of Trees was met by critics — including Republicans in Congress — with derision and claims of wasteful spending and government overreach.

The brain behind the project was Raphael Zon, an exile from Russia who landed in the United States in 1898 and earned a degree in forest engineering from Cornell University. He advocated for the widespread construction of shelterbelts, which had proven successful on farms in the harsh steppes of Russia.

According to Orth, the effectiveness of FDR's wall of trees wouldn’t be known for decades. But the government did know then, as it does now, that without dramatic adaptation measures, the American agriculture belt could be permanently damaged.

“I think in the long run, that was probably one of the important contributions” to recovery from “the Dirty ‘30s,” as Dust Bowl survivors called the decade, he said.

Its impacts are evidenced by the millions of acres of crops and tens of thousands of livestock lost in recent decades from extreme summer heat. Worsening spring floods are delaying the planting of commodity crops, while freakish thunderstorms and hurricane-strength derechos redefine weather norms in the Great Plains and Midwest.

“I think it’s coming back around,” Tom Sauer, a senior soil scientist at the National Laboratory for Agriculture and the Environment in Ames, Iowa, said in a telephone interview. “I wrote a paper about 12 years ago saying, ‘You know what? The Prairie States Forestry Project was a perfect example of a climate adaptation project.’ Now we’re seeing some of these ideas gain traction again.”

Sauer, who also studies "agroforestry" as a means of carbon absorption and sequestration, said farmers, many of whom have tilled the same land for generations, are beginning to draw science-based links between extreme weather events, crop and livestock stress, economic security and preserving rural ways of life. The shift is slow-moving, he said, but many farmers who grew up believing trees were impediments to cropping and grazing are rethinking those assumptions.

“Agroforestry is the red-headed stepchild” of agriculture, Sauer said. But once recognized, it can be a very effective tool for farmers looking to mitigate damage from climate change. Research has shown that shelterbelts can improve crop yields by protecting plants from high temperatures, wind and rain storms, and depletion of soil moisture and nutrients, he said.

And yet what remains of the original Great Wall of Trees continues to shrink, county by county, farm by farm.

“The remnants are dwindling,” said Pam Bergstrom, a forester with the Nebraska Forest Service who has worked to document and “renovate” shelterbelts in the Lower Elkhorn Natural Resources District encompassing 15 counties in northeast Nebraska.

In some areas, she said, there is no clear imprint of the original shelterbelts, many of which ran parallel and were staggered to create passage for plows and farm equipment. In remnant places, many farmers don’t recognize them for their environmental benefits or historical significance. They are anachronisms to 21st-century commodity farming.

“I think many people don’t realize the range of ecological services shelterbelts provide,” Bergstrom said in a phone interview. “Where the old ones remain, some farmers are open to leaving them there for a variety of reasons. But it’s not the norm.”

Richard Straight, technology transfer leader at the Forest Service’s National Agroforestry Center in Lincoln, Neb., and expert on agriculture-sector climate resilience, stressed that farmers are not inherently opposed to trees.

In fact, farm groves remain across what experts say used to be the “Midwestern oak savanna,” a native prairie landscape widely relied upon by Native Americans for growing food and providing shelter and forage for animals (Climatewire, Aug. 19).

“There is a tendency to look toward technology to address these problems,” he said. That includes genetically modified crops that can better survive drought and storms, advanced irrigation and soil monitoring systems, remote sensing and earlier and more accurate weather forecasting.

Bergstrom said such advances have revolutionized Great Plains agriculture. But she said shelterbelts still hold purpose and value. “The ones that are still out there are providing ecological services,” she said.

Sauer said one of the hardest tasks is convincing farmers — many of whom place a high value on property rights and personal autonomy — that planting shelterbelts under a modern federal agroforestry program would not undermine their freedoms, including choices about what crops to grow and where to grow them.

“No one can look to the past to plan for the future,” Sauer said. “What we need is to broaden our perspective to say, ‘How can we design a program to meet the specific needs of that landowner while still qualifying them for government support?’

“I think that’s one approach we haven’t tried in the past,” he added. “And honestly, I think a lot more farmers would be interested in planting trees under a well-designed program that provides real benefits and is implemented the right way.”

Orth noted as much in a 2007 study published in the journal Agricultural History in which he said government agroforestry adaptation initiatives “must be as public and open as possible,” but they also require “a public willingness to accept uncertain answers and to exercise great patience waiting for better solutions and results.”

Whether that message will resonate in Middle America is an open question. Officials estimate the original Great Wall of Trees has shrunk by about two-thirds, both by natural die-offs and the removal of shelterbelts.

Bergstrom, of the Nebraska Forest Service, said many of the farmers she meets had little awareness of the history of their shelterbelts, much less the benefits they provide to mitigate climate change impacts.

An exception can be found in the tiny town of Orchard, Neb., population 536, and site of what is believed to be the Nebraska’s first contribution to the Great Wall of Trees.

Tensions flared in 2017 when the buyer of a long-standing family farm decided to tear out a shelterbelt built in 1935. Local preservationists and some townspeople were outraged but had no recourse to stop the removal from private land. A roadside historical marker explaining the significance of the Great Wall of Trees was also felled. It now sits in a local history museum in a neighboring community.

“It was a young kid, and he tore the shelterbelt out unbeknownst to anybody in the community. It all happened under the table,” recalled Beverly Krutz, a retired teacher who now operates a thrift store in Orchard.

Correction: An earlier version of this story misstated the leader of Russia in 1898. It was Czar Nicholas II.