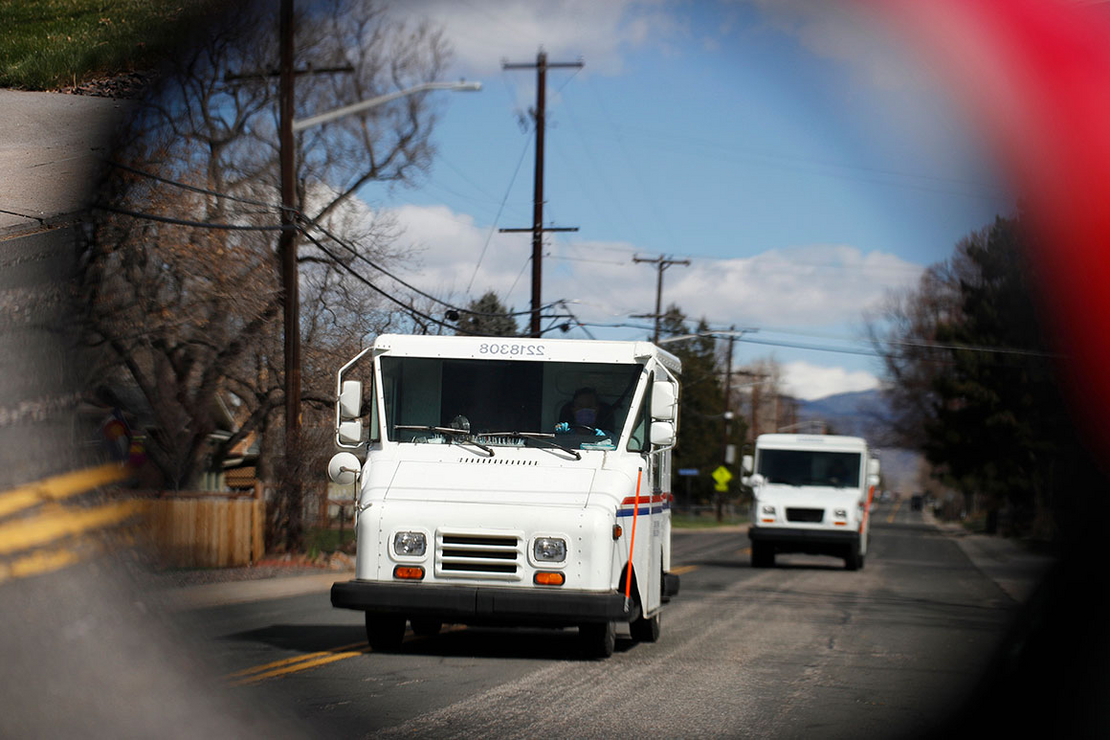 U.S. Postal Service trucks are reflected in a vehicle's side mirror. The mail service has one of the largest truck fleets in the United States. AP Photo/David Zalubowski

Shortly after his inauguration, President Biden set an ambitious goal to electrify the entire federal fleet.

Now, his agencies are drafting a plan to phase out hundreds of thousands of internal-combustion engines, which analysts say could save the government billions of dollars and make a dent in one of the most intractable carbon-emitting sectors.

But supply shortages, coupled with funding roadblocks and a slow fleet turnover, could threaten to stall progress, observers say.

“It’s a process,” said Sam Abuelsamid, an analyst at the market research firm Guidehouse Insights. “They don’t replace vehicles on an annual basis. It’s staggered, so vehicles bought in 2020 and 2021 will probably be in service anywhere from three to 10 or more years before they’re replaced again.”

The current federal fleet encompasses about 657,000 cars, SUVs and trucks. Of those, less than 1 percent are currently electric, according to General Services Administration data. In January, Biden signed an executive order directing agencies to dramatically increase that number, flipping the fleet to electric and zero-emissions vehicles as a way to promote livable-wage, union jobs and tackle the climate crisis (Energywire, Jan. 28).

So far, agencies have collectively purchased about 500 zero-emissions vehicles, which more than doubles federal purchases in 2020 but remains a fraction of what is needed to meet the president’s goal.

“The opportunities are clear, but first we need to acknowledge that we are starting from a low baseline,” White House national climate adviser Gina McCarthy said during a recent GSA FedFleet conference.

A study released last week from Atlas Public Policy found that replacing the government’s gas-powered light-duty vehicles and buses by the end of the decade could yield $1.18 billion in savings (Energywire, Aug. 19). Add in the more than 220,000 vehicles operated by the U.S. Postal Service, and that number jumps to $4.3 billion in savings.

“One thing to consider, and this is more common with fleets than with individual consumer vehicles, is total cost of ownership,” Abuelsamid said. “Even if the vehicle itself may be more expensive to acquire, there will be significant savings in operating costs over the life of that vehicle.”

Without fuel and maintenance costs, like an oil change, electric vehicles tend to be cheaper to own and operate in the long run.

Electrifying the federal fleet is also largely viewed as a way to jump-start the broader transition to electric vehicles and curb planet-warming carbon pollution. The transportation sector is the largest contributor to greenhouse gas emissions in the country.

Biden set a target this month for 50 percent of all new vehicle sales to be electric by decade’s end. And while the bulk of major automakers in the country have signaled their support, a global dearth of automotive chips is causing production delays (Climatewire, Aug. 23).

Earlier this month, Ford Motor Co. told customers who have ordered the auto giant’s electric Mustang that the chip shortage is affecting the company’s ability to keep up with the demand.

Paul Bledsoe, a strategic adviser at the Progressive Policy Institute, said the chip shortage is expected to ease next year, but it is crucial that the government “stay on top of it.”

“We can’t allow that to slow the pace of the EV transition,” said Bledsoe, who served as a Department of Energy consultant under former President Obama and worked on climate change in the Clinton administration.

“If you get these government contracts in place, you have a steady stream of demand that allows you to create these EV production lines, so when demand begins to tick up, you can really turn them over,” said Bledsoe. “They need to announce one of these contracts.”

The White House is finalizing guidance on how agencies should work together to achieve net-zero federal emissions by 2050, including through federal procurement, according to a White House spokesperson. But the only federal agency to award a high-profile vehicle contract in recent months is the Postal Service, and that was not exclusively for EVs.

Rep. Marcy Kaptur (D-Ohio), who serves as co-chair of the House Auto Caucus, is one of a number of lawmakers who have been probing the Postal Service about its decision to choose a company that has never manufactured an electric vehicle.

“It’s time for the Postal Service to be the lead agency to electrify its fleet,” she said during a recent Electrification Coalition webinar.

Barry Rabe, a professor of environmental policy at the University of Michigan, said he expects that these delays won’t make much of a difference in the long run.

“When you have a very welcomed buyer who, in the case of the Biden administration, has an extraordinary interest in putting some points on the scoreboard, I think that is probably a pretty safe bet,” he said, “as opposed to the other things that we think about with electric vehicles, like how large a subsidy you need to get purchases up to 10 percent, and that sort of thing.”

Still, while Biden can direct agencies to purchase EVs, he cannot allocate additional funding without Congress. Funding for the federal shift to zero-emissions vehicles will be limited by available agency appropriations.

In his fiscal 2022 budget proposal, Biden requested $600 million in new investments for federal purchases of EVs.

Abuelsamid said that by the time Congress finalizes spending and the administration has mapped out its procurement plan, there are likely to be enough electric vehicle offerings and parts to facilitate the federal transition.

“I don’t expect the real procurement to start until at least late next year, probably into 2023,” he said. “Virtually every manufacturer is ramping up plans to introduce dozens of new EVs over the next several years, so by 2023, I think we expect to have over 100 different EV nameplates available in the United States.”