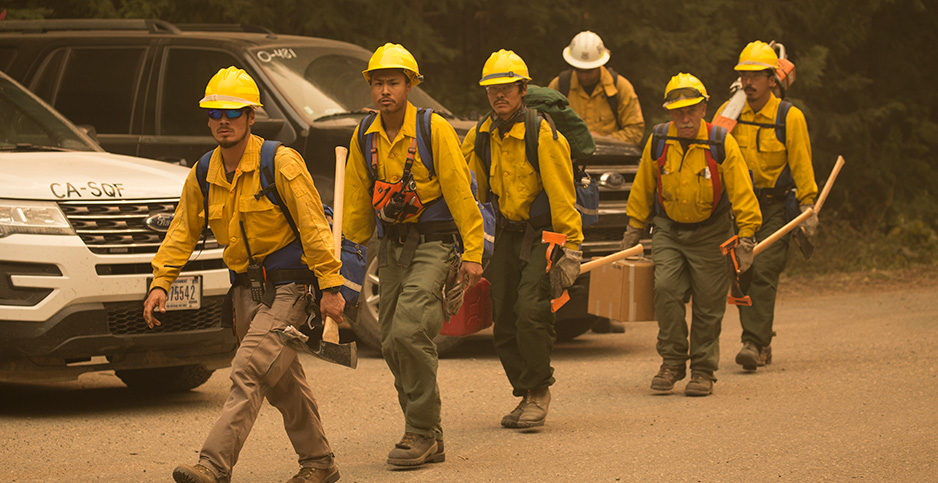 Forest Service firefighters work to put out blazes in 2017 in Oregon. The Forest Service and Bureau of Land Management are now being deployed as part of the coronavirus response. U.S. Forest Service-Pacific Northwest/Flickr

The Federal Emergency Management Agency is mobilizing federal land management agencies in the West to help rural communities with limited resources deal with the novel coronavirus.

FEMA confirmed to E&E News that it is "working closely" with the Interior and Agriculture departments, and that personnel with the Bureau of Land Management and Forest Service are now employed in five Western states and Wisconsin as part of the Trump administration’s COVID-19 response efforts.

The BLM and Forest Service staffers, many with disaster certification due to their annual duties fighting wildfires, are working in Colorado, Idaho, New Mexico, Washington and Wyoming, as well as Wisconsin, a FEMA spokesperson said.

The federal help comes as the novel coronavirus moves outside of major population centers like New York City — where COVID-19 has killed more than 10,000 people — and into sparsely populated areas.

The assistance includes sending Incident Management Teams to help set up emergency operation centers, according to a FEMA spokesperson. BLM and Forest Service public information officers and liaison officers have also been deployed to help with intergovernmental coordination; both agencies have helped supply and install "equipment such as hand washing stations," the spokesperson said.

The Forest Service, which is the lead agency for coordinating federal firefighting efforts, says that to date, there are 38 service officials "activated to assist FEMA" in the effort to contain the pandemic.

An Interior Department spokesman did not disclose how many agency officials are now working with FEMA, but did confirm that "personnel from across the Department," not just BLM, have been deployed "in support of FEMA’s response efforts."

The individual states requested the help, the FEMA spokesperson said.

But the agency is also responding to calls by U.S. senators and Western governors to tap the disaster relief expertise of federal land agencies to help rural areas respond to the novel coronavirus.

Bennet said in a statement this week to E&E News that "many rural communities in Colorado and across the country" are now faced with "urgent challenges" as a result of the pandemic that "could be met with increased resources and the support of experienced staff from agencies like the BLM and the U.S. Forest Service."

He said this is particularly true for some rural counties on Colorado’s Western Slope that, in addition to COVID-19, must also prepare "for other possible emergencies, like wildfires and floods" that occur annually.

The New York Times reported last week that the coronavirus has now reached nearly three-quarters of the country’s rural counties, and that some health officials and lawmakers are concerned it could overwhelm rural communities already lacking medical facilities and supplies.

"In rural states like Montana, our medical professionals are already being stretched-thin by the COVID-19 pandemic, and our most rural counties are being dealt the biggest blow," Montana Sen. Jon Tester (D) said in an emailed statement to E&E News.

Tester was among the 24 senators who signed the February letter to the three Cabinet secretaries.

"BLM and the Forest Service have thousands of highly-trained employees who are well-trained to provide additional organizational and administrative support to help manage emergencies," he said, "and it’s critical that these agencies act immediately to get help to the frontier areas that are going to be hit hardest by this crisis."

Perdue and Interior Deputy Secretary Katharine MacGregor wrote in separate letters earlier this month to Bennet that both agencies are willing to contribute if FEMA formally requests their help.

Perdue noted that Forest Service Law Enforcement and Investigation personnel "are currently deployed" to help the Department of Health and Human Services "at COVID-19 screening and quarantine centers."

MacGregor wrote that "law enforcement officers" with the Interior Department and BLM are also helping Health and Human Services and the Centers for Disease Control and Prevention in the COVID-19 response.

"Through these and other authorized channels, we remain committed to helping rural communities," she wrote.

It took weeks for that to happen on a wide-scale basis because states need to ask FEMA for help first, and then the emergency management agency can coordinate federal land managers to help.

While Bennet has spearheaded efforts to help rural communities respond to the COVID-19 health crisis, other lawmakers are now taking action as the virus spreads.

New Mexico Sen. Martin Heinrich (D), who signed the Bennet-led letter in February, announced this week that he plans to file a bill that would disburse $250 billion to state and local governments with populations of less than 500,000 that are facing "enormous economic burdens and costs" caused by the pandemic.

Heinrich’s office says the bill already has 11 co-sponsors — all Democrats — including Sens. Dianne Feinstein of California, Amy Klobuchar of Minnesota, Elizabeth Warren of Massachusetts and Maria Cantwell of Washington.