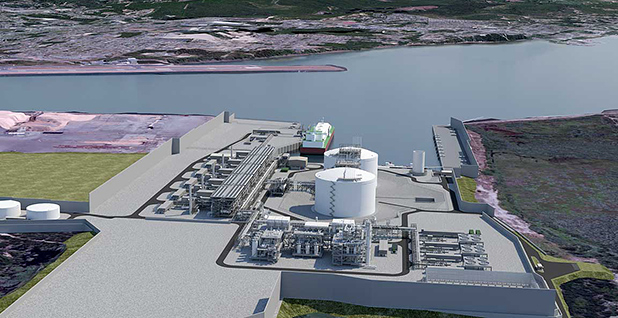 A federal dispute over endangered species has stalled an embattled $10 billion liquefied natural gas project in Oregon, raising questions about the future of the West Coast’s first LNG export hub.

For months, the Federal Energy Regulatory Commission, the Fish and Wildlife Service, and NOAA Fisheries have sparred over whether a new biological assessment from FERC is needed for the Jordan Cove LNG export project and the Pacific Connector Gas pipeline.The gas industry has said the hub is key for exports to Asian markets.

The project being developed by Pembina Pipeline Corp. would include an export terminal and a 230-mile, 36-inch-diameter feeder pipeline that would run from a town along the Oregon-California border to a 200-acre natural gas liquefaction and export terminal at Coos Bay.

The disagreement centers on a 15.2-mile-long pipeline route alternative called the Blue Ridge Variation. FERC required the pipeline developer to include this variation in its planning, triggering the need for updated biological opinions from Interior and NOAA. The agencies say their opinions hinge on FERC’s assessment.

"[T]he information provided to the Service by FERC in the 2019 [biological assessment] … is not adequate to identify and analyze the effects of the Blue Ridge Alternative route to listed species," Henson wrote in the letter to FERC. "FERC has not subsequently provided additional data regarding that route."

But FERC maintains its 2019 environmental assessment provides the necessary information for the agencies to issue new opinions. That splits with FWS and NOAA Fisheries, which say they do not have enough information from the agency to determine if the project is in compliance with the Endangered Species Act. Without the updated biological opinions, the project could face lawsuits.

FERC declined to comment on yesterday’s letter. However, in an Aug. 5 letter to FWS, James Martin, a FERC program director, said his agency had already provided the necessary data in its June 23 request that the agencies issue new opinions or reinitiate consultation.

"I remind you that in our request, we included a description of the Blue Ridge Variation and an assessment of the differences between the proposed pipeline route and the variation," he wrote. "I believe this information is sufficient for the FWS to reinitiate consultation."

In an Aug. 5 letter, FERC responded by saying it had provided the necessary information and included a chat delineating the differences between the proposed and alternative route.

In yesterday’s letter from FWS, Henson said Pembina indicated the developer would put together the additional information on the Blue Ridge alternative required to advance the project and that the timing would therefore be contingent on FERC and the company.

"Because the Service cannot dictate or predict such action, we cannot reasonably determine when consultation will formally begin," he wrote. "However, in communications between Pembina and the Service … Michael Stapleton of Pembina indicated that the needed efforts are underway."

He added: "Assuming the requested information is forthcoming and collaboration continues as previously discussed, the Service is confident we can reinitiate and complete formal consultation in a timely fashion once we receive the needed information."

Pembina did not respond to requests for comment in time for publication.

The Jordan Cove project was proposed as a natural gas import facility in the early 2000s and was opposed by adjacent landowners. The project was shifted to an export site when U.S. hydraulic fracturing operations significantly boosted domestic supplies.

In 2013, Jordan Cove’s developers filed a new application with FERC. Their bid was denied in 2016 following concerns about a lack of customers; falling property values; and harm to environmental resources that support timber, fishing and other local industries (Energywire, March 14, 2016).

FERC approved the project in March, granting Pembina eminent domain authority to condemn private property for the Jordan Cove pipeline. Republican Chairman Neil Chatterjee has stressed that no construction on the pipeline or LNG terminal, including land clearing, can take place until the company has obtained the necessary permits — which is proving to be an uphill battle (Energywire, May 27).

Jordan Cove is facing additional hurdles that could stymie progress, including legal challenges from landowners, Indigenous tribes and environmentalists (Energywire, May 29).

Oregon’s Department of Environmental Quality denied the project’s water quality certification this year. The state Department of Land Conservation and Development rejected a permit because of the adverse effects the facility would have on coastal and critical habitats, as well as on endangered species. In February, it ruled that the project was not in line with the state’s coastal zone land use laws.

Earlier this year, Pembina also withdrew its application for a dredging permit when the Oregon Department of State Lands indicated that it was about to reject that application, as well.

"There are still dozens if not more local land use and state permitting decisions that are still outstanding, and there’s a glut of LNG out there on the market," said Susan Jane Brown, an attorney with the Western Environmental Law Center representing conservation groups challenging the project. "It is still a little mind-boggling that we’re fighting this thing for the third time."