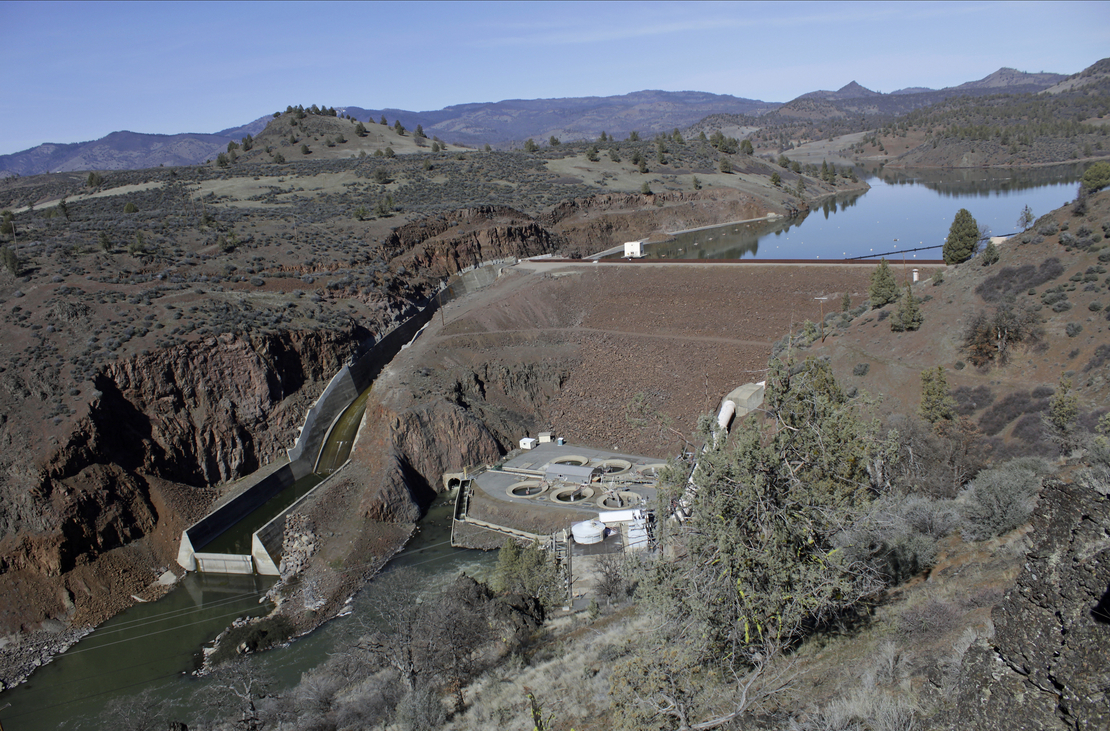 The Iron Gate Dam, powerhouse and spillway are on the Lower Klamath River near Hornbrook, Calif. Gillian Flaccus/AP Photo

The Federal Energy Regulatory Commission on Thursday unanimously approved the nation’s largest dam-removal project, clearing the way for restoration of more than 400 miles of the Klamath River by 2024.

The commission granted a request from PacifiCorp to surrender licenses and decommission the Lower Klamath Project’s four hydroelectric dams in Oregon and California — the J.C. Boyle, Copco No. 1., Copco No. 2 and Iron Gate — ending decades of debate and review.

“Some people might ask why in this time of great need for zero-emissions energy, why is the licensee agreeing to remove the dams?” FERC Chair Richard Glick acknowledged before the vote. “It doesn’t happen every day.”

He pointed to proponents of removing the dams, including Native American tribes, who’ve argued that the river’s natural flows must be restored to improve the health of species, including salmon, steelhead and lamprey, as well as to address environmental impacts like toxic blue-green algae blooms.

“A number of years back I don’t think the commission necessarily spent a lot of time thinking about the impact of our decisions on tribes, and I think that is a very important element,” Glick said. “In today’s order and a number of orders recently … I think we’re making progress on that front.”

He concluded: “This has been a long time coming, this order.”

Earlier this year, FERC released a final environmental impact statement endorsing the removal of the dams, as well as the drawdown of four reservoirs and the restoration of affected lands (Greenwire, Aug. 29).

No objections were raised during the meeting. Opponents of the dam removal include California Republican Rep. Doug LaMalfa, who argues that the demolition will lead to a “man-made natural disaster” if sediment and silt are allowed to flow downstream from the former dam sites (Greenwire, March 1).

In the wake of FERC’s order, the nonprofit Klamath River Renewal Corp. (KRRC) is expected to take over the Lower Klamath Project License from PacifiCorp and begin the dam removal process, which could be completed as early as 2024.

Restoration efforts will restore the river’s flow from southern Oregon to Northern California and then the Pacific Ocean. Beginning next year, pre-removal activities, including road construction, will begin, followed by allowing existing reservoirs to drain to “dead pool” levels, or the state where water cannot escape. Then the Copco No. 2 Dam will be the first structure removed, followed by the concurrent removal of the three remaining dams.

“The Klamath salmon are coming home,” Yurok Tribe Chair Joseph James said in a statement. “The people have earned this victory and with it, we carry on our sacred duty to the fish that have sustained our people since the beginning of time.”

“Congratulations to all those who poured their blood, sweat and tears into making this happen. Water and fish health are at the heart of our identity as Native people and we are looking forward to seeing a healthier watershed and fishery, which will result in healthier communities for all Klamath Basin tribes,” Davis said. “Now we must keep the momentum going, and we are looking forward to working with all of our neighbors and partners in that effort.”