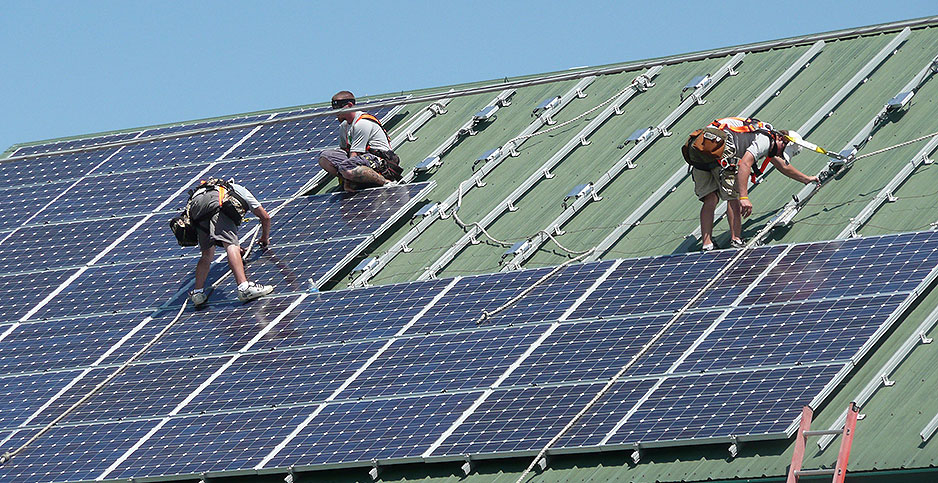 In a unanimous vote, FERC rejected a contentious petition that sought to end nationwide net metering, a practice that requires utilities to pay rooftop solar owners for the extra electricity they generate.

"[I]f someone loads a gun with two bullets and then decides to fire only one bullet at the victim, would the headline be ‘fair-minded person fires only 1 bullet’?" Miles Farmer, an energy analyst and former policy adviser for New York Gov. Andrew Cuomo (D), asked on Twitter about the two decisions.

Yet Republican Chairman Neil Chatterjee rejected the charge that an updated PURPA would curtail the "thriving" renewable industry.

"I am not at all concerned," he said on a call with reporters after yesterday’s meeting.

The commission rejected the petition by the New England Ratepayers Association (NERA) on procedural grounds, saying the request didn’t identify a specific controversy or harm for the agency to address. Republican Commissioners James Danly and Bernard McNamee offered comments about the petition, raising questions about whether the commission might have an appetite to examine federal jurisdiction over net metering in the future.

"Though I support the commission’s order dismissing [the petition] on procedural grounds … I provide this concurrence to make clear today’s order does not address the underlying issues," McNamee said at the agency meeting. "Nor is it a decision on the merits raised by and contained in the petition."

Ari Peskoe, director of the Electricity Law Initiative at Harvard Law School’s Environmental and Energy Law Program who has been critical of NERA’s petition, said in general, he doesn’t see the commission picking the issue back up, however.

"Although perhaps yes if [Republicans] hold the majority for another five years, which might provide enough time for someone to file a more specific petition/enforcement action," he wrote in an email.

"Perhaps he knows something. His premise is that various courts might draw different conclusions about FERC’s jurisdiction, and that would be a bad result," he said. "He therefore appears to suggest that FERC ought to weigh in, to ensure a uniform national approach to FERC’s jurisdiction."

He added that a court faced with a net-metering lawsuit could simply ask FERC to weigh in as has happened in the past.

The development was a welcome one for the thousands of people and groups that had asked FERC to dismiss the petition after it was first filed in April (Energywire, June 16).

"This is a big win for our climate and for communities embracing clean solar power," Howard Crystal, an attorney with the Center for Biological Diversity’s Energy Justice Program, said in a statement. "FERC’s unanimous ruling ensures that states can keep appropriately compensating people who install rooftop solar."

In a statement, NERA President Marc Brown expressed disappointment but said FERC left the door open "to address the concerns raised by the Commissioners in its order."

"In its order the Commission didn’t address the merits of NERA’s petition and, in fact, stated that the dismissal is not a concession by FERC that it does not have jurisdiction over exports from customer-generators," Brown said. "Commissioners Danly and McNamee noted in their concurrences that the issues raised by NERA are ‘questions of profound importance and the Commission will eventually have to address them’ and ‘the Commission’s Order is not a decision on whether the Commission lacks jurisdictiction over the energy sales made through net metering’."

The petition called on FERC to place net metering under federal jurisdiction, which could have significantly cut the rates paid to rooftop solar owners, making the widespread practice less financially viable. But NERA said the move would have lowered costs for ratepayers.

NERA has declined to disclose the group’s members, including to E&E News, beyond describing them as businesses, associations and individuals in New England. As a 501(c)(4) organization, NERA is not required to disclose its donors to the IRS (Energywire, July 6).

With PURPA, Republicans on the commission moved 3-1 to finalize their reworking of FERC’s implementation of the law, prompting anger from advocates who said it would be disastrous for renewable deployment in vertically integrated electricity markets, where utilities own generation and transmission assets. .

"Instead of promoting small, clean generation, FERC is undercutting the ability of solar and wind power to get a fair chance to compete," said Tom Rutigliano, an advocate with the Natural Resources Defense Council’s Sustainable FERC Project. "Homeowners putting solar panels on their roof, farmers leasing their land to wind turbines and industrial facilities with efficient on-site power all lose under FERC’s rule today."

The changes made final by FERC yesterday give states and utilities more flexibility in how they set rates for producers looking to generate power on PURPA. That has the potential to undermine the market dynamics and financing mechanisms that have enabled more small-scale renewables to pop onto the grid.

Republicans complained that the PURPA regulations were forcing utilities to take on power that they sometimes did not need, at prices that over the long term made wind power far more expensive than power from other sources.

Considering the maturation of renewable technology, Chatterjee said he did not expect the changes to have any effect on renewable deployment under the PURPA umbrella or elsewhere.

"The renewable energy industry is thriving throughout this country. If you look at some of the RTO/ISO interconnection queues, you’ll see that the queues are dominated by solar, wind and battery storage projects," he said, referring to regional transmission organizations and independent system operators.

"Regardless of what you think about PURPA and this final rule, most of the renewable energy projects developed these days are done outside of PURPA," Chatterjee added. "That, to me, is total proof that renewables can compete in our markets, and I do not expect that to change in large part because they are now cost-competitive."

Democrats also have complained about PURPA.

As flagged by Democratic Commissioner Richard Glick, the "1 mile" rule — the factor which divides neighboring facilities from counting as one facility — has resulted in some abuse of the PURPA guidelines, and market rates could have found a more bipartisan approach.

That sentiment was shared by Paul Bledsoe, a former climate adviser during the Clinton administration, who said changes in the rate structures have the potential to benefit ratepayers due to avoiding those long-term contracts, but more help to renewables should accompany the change.

"In this sense, the rule is a benefit to consumers and states, with the potential for cheaper power," said Bledsoe, now with the Progressive Policy Institute. "But it should be balanced on policy grounds by longer-term solar and wind tax credit extension."