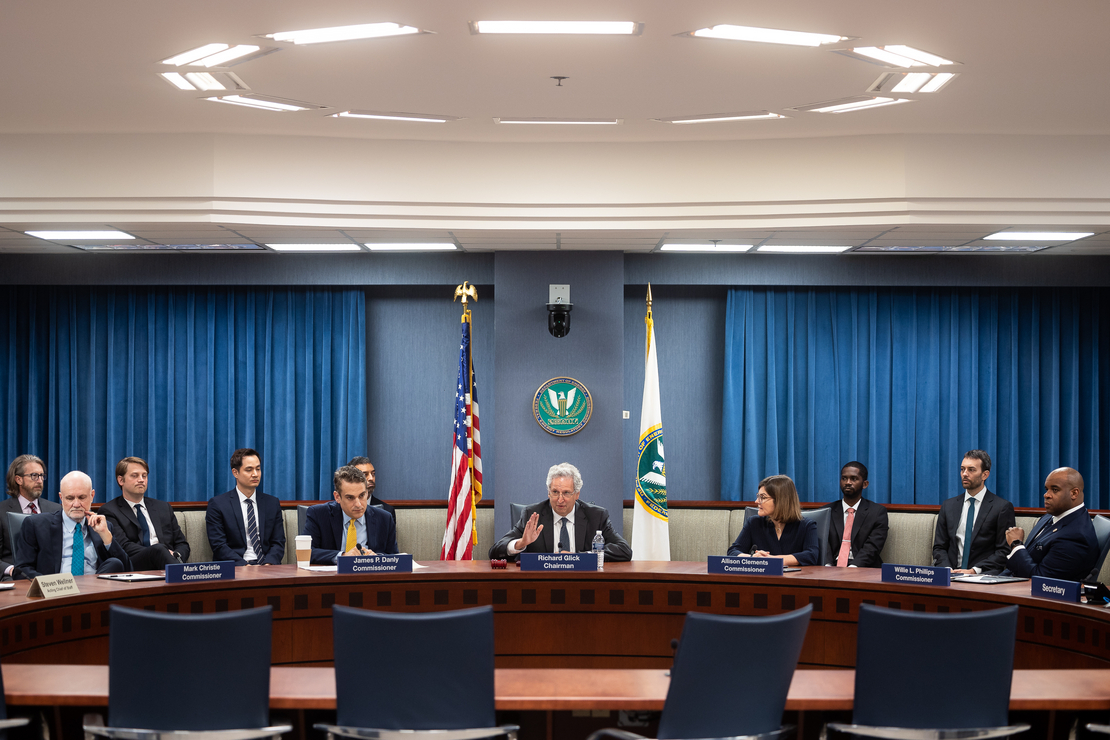 Members of the Federal Energy Regulatory Commission are seen this year at the agency's headquarters. Francis Chung/POLITICO

The Federal Energy Regulatory Commission voted Thursday to allow a controversial Midwest pipeline to continue operating after a court revoked its original permit, in a win for natural gas at the last meeting overseen by Chair Richard Glick.

Glick will step down from his post in the coming weeks, leaving the independent commission with four members, the Democrat said in closing the meeting.

President Joe Biden nominated Glick for a second term on the commission, but his future at FERC dimmed last month when Senate Energy and Natural Resources Committee Chair Joe Manchin (D-W.Va.) indicated he would not allow the nomination to move forward.

“It’s been really the honor of a lifetime,” Glick said of his tenure.

Glick joined the commission in late 2017 and became chair in January 2021. His term on the commission expired this year, meaning he’ll need to depart from FERC once the Senate adjourns.

While some observers had speculated that the White House could try to nominate Glick again in the New Year, he told reporters after the Thursday meeting that he was not interested in going through the process.

“I very much hope that the president nominates [my] replacement and moves forward as quickly as possible, as well as the Senate, but we’ll see how that process goes,” he said.

During the meeting, FERC unanimously authorized the Spire STL pipeline in Missouri and Illinois to remain in service after reevaluating whether the project was necessary. The commission also proposed a new process for siting certain long-distance power lines that could help spur the development of multistate transmission projects seen as key for integrating clean energy into the power grid.

FERC had issued a permit for the 65-mile Spire pipeline in 2019. But last year, the U.S. Court of the Appeals for the District of Columbia Circuit ruled that the commission had ignored evidence that the project was not needed.

The D.C. Circuit also revoked the project’s original permit, raising questions about whether it could continue to supply natural gas service to the St. Louis region. In the meantime, Spire has been accused by Sen. Tammy Duckworth (D-Ill.) and others of failing to properly restore private properties along the pipeline route (Energywire, Nov. 8).

The company maintains that it has been proactive in its restoration work and is committed to working with landowners.

Even as the commission voted to reissue a permit for the project, Glick and Commissioner Allison Clements said the agency would closely monitor Spire’s restoration process and other aspects of the project.

Environmental groups have said the Spire project illustrates the alleged deficiencies in the commission’s reviews of natural gas projects, arguing that FERC must more closely scrutinize the economic need for new projects and their environmental impacts.

“The Spire situation is the embodiment of why FERC needs to get its reviews of pipelines right from the start,” Gillian Giannetti, a senior attorney at the Natural Resources Defense Council’s Sustainable FERC Project, said in an statement. “No community — or company, for that matter — should be faced with years of uncertainty because FERC didn’t do a full analysis of the public’s interest in a pipeline plan.”

Glick described FERC’s initial decision in 2019 — from which he dissented — approving the Spire pipeline as “a model for what not to do.” In issuing that permit, the commission had justified its decision based on the fact that Spire had lined up an agreement with a shipper, even though that shipper was an affiliate of the same company.

Still, since the initial permit was issued, Spire took steps to disengage from other gas infrastructure. That has made the pipeline the only viable option now for providing gas service in the area it serves, Glick said.

“So, reluctantly, agreeing with the record that I think there is a need for this project now, I’m voting yes,” he said.

Sean Jamieson, general counsel for the Spire STL pipeline, said FERC’s decision Thursday should dispel any notions that the project wasn’t needed in the St. Louis region. As for the concerns about restoration, the company has reached agreements with 90 percent of landowners, he said, and outstanding disputes stem from other landowners who refuse to let the company access their properties.

“I’m very pleased,” Jamieson said of the latest decision. “We appreciate the FERC’s comprehensive review of the record.”

Specifically, the 2021 law asserted that FERC could site transmission lines in specific areas designated by the Department of Energy as National Interest Electric Transmission Corridors. But that’s only if one or more states had denied an application for the line.

Historically, FERC has not signed off on transmission projects — even ones that cross multiple states — as that process has been left to individual state regulators.

To comply with last year’s law, FERC proposed new requirements that developers engage with landowners near potential transmission lines before they can acquire a right-of-way from the commission. Developers would also need to file reports to FERC detailing possible impacts to environmental justice communities and to tribes and tribal lands as well as various impacts to the environment and air quality, according to the proposed rule.

Clements, a Democrat, said the approach outlined in the proposal would help get transmission lines built, reduce litigation and “bring people into the conversation early on.”

“The record continues to demonstrate that significant investment in new transmission across the country is nothing less than essential to system reliability and customer affordability, now and in the future,” Clements said.

Some commissioners expressed concerns with aspects of the proposed rule, although it was ultimately supported by all five commissioners. Republican Commissioner James Danly, for example, said the proposal had “unnecessarily burdensome requirements.”

The process outlined in the proposal also would not necessarily result in new transmission lines being built, said Commissioner Mark Christie, noting the difficulties associated with FERC approving projects that states don’t want.

If FERC were to overturn a state decision denying a transmission line and allow it to move forward, the commission’s decision would be “litigated 16 ways from Sunday,” said Christie, a Republican. The environmental and other requirements in the proposal could easily become “lines of attack” for litigators, he added.

The proposal could be revised and finalized at some point next year.

Developing high-voltage, multistate transmission projects in the United States has been a fraught process, one that experts say could slow the transition toward clean energy.

“FERC’s action today to open up a rulemaking to address its backstop siting authority tees up another important element of the challenging process of getting transmission planned, approved, and built,” Marquis said in a statement.

In another decision with implications for the reliability of the power grid, FERC directed NERC to study whether an existing standard for securing the grid needed to be improved.

The current standard in question, CIP-014-3, requires transmission owners to conduct risk assessments of electric stations and substations “that, if rendered inoperable or damaged, could result in instability, uncontrolled separation, or cascading within an Interconnection.”

In its new proposal, FERC directed NERC to evaluate whether the standard should apply to a broader set of facilities, whether the risk assessment process was adequate, and whether a minimum level of security protections should be mandated for all transmission stations and substations.

The proposal came in response to a number of incidents involving attacks or threats to power system infrastructure, Glick said. Earlier this month, for example, about 45,000 customers in North Carolina lost power — some for days — after a targeted shooting at two substations operated by Duke Energy Corp. (Energywire, Dec. 5).

‘You want to do something important’

Toward the end of the meeting, Glick reflected on his time at the commission and thanked his colleagues, family and lawmakers for supporting him.

As for next steps, he does not have a new position lined up, he said. Nor has he communicated with the White House about a potential successor for his seat on the commission, he added.

Glick has won support from clean energy advocates as well as Democratic members of Congress. He previously worked as an aide for the Senate Energy and Natural Resources Committee.

He also butted heads with some lawmakers and industry groups, particularly over the agency’s processing of applications for natural gas pipelines and export terminals under his tenure.

Republican lawmakers and Manchin have accused FERC under Glick’s watch of taking too long to approve new gas pipelines and LNG terminals, and they decried his efforts earlier this year to try to assess new gas projects’ greenhouse gas emissions (Energywire, Dec. 15)

Nonetheless, the Republican and Democratic commissioners on Thursday praised Glick’s leadership as chair of the commission and his willingness to work with others regardless of political differences.

“You hold public office for the right reason. You want to do something important,” Christie said.

In a statement Thursday, Gregory Wetstone, CEO of the American Council on Renewable Energy, called Glick “an exceptionally effective and visionary leader” for the commission. The trade group also urged Biden to nominate someone soon to limit the length of time at which the commission would be down one member.

“His commitment, collegiality, and willingness to tackle the regulatory barriers facing the transition to a 21st century grid have been critically important,” Wetstone said of Glick.