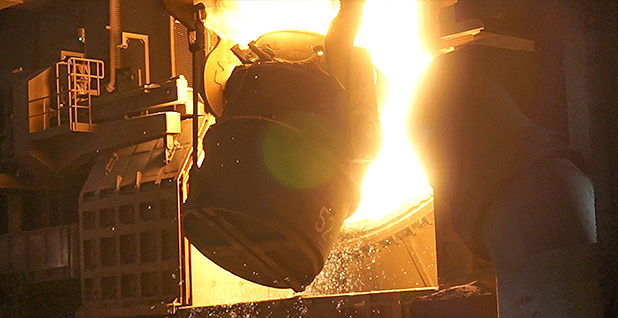 Molten iron is poured from a ladle into a basic oxygen furnace at the ThyssenKrupp steel mill in Duisburg, Germany. Steel is a highly emitting industry. Photo by Umair Irfan.

DUISBURG, Germany — "Our future has a heart of steel," reads the banner above the gate leading into the ThyssenKrupp AG mill.

Here, on the banks of the Rhine, hosting the world’s largest inland harbor, is a sprawling industrial metropolis. Its size is unrivaled in Europe. It powers the economy of the Ruhr Valley region in western Germany, with ready access to coal, rivers for transport and nearby markets.

The towering metal buildings, cranes, pipes, ductwork, conveyor belts and trains all work to turn iron ore, coking coal and scrap metal into steel, a material that advanced civilization and one that the industry thinks will continue propelling humanity throughout this century.

The ThyssenKrupp plant has advanced drastically since it was opened in 1891, with greater automation, modern materials and computer controls guiding the highly efficient manufacturing process for the most widely used material on earth.

Yet steelmaking still has a primeval aura. Heat ripples off of blast furnaces in the dark, dusty plant, and roaring flames billow from converter vessels pouring rivers of blindingly bright molten metal, the glowing golden blood of industry.

And while the future may have a steel heart, its lungs need to stop exhaling so much carbon dioxide.

With the world moving to tackle greenhouse gas emissions, all sectors of the economy are being pressed to address their contributions to the problem. But for an inherently energy-devouring process like making steel, there isn’t much room left to maneuver.

"It’s really highly optimized, this plant," said Markus Oles, head of innovation strategies and projects at ThyssenKrupp. "Maybe we can reach 3, 4 or 5 percent more efficiency, but at the end of the day, if you produce steel, you have a CO2 footprint."

Curbing CO2 — just not in the mills

Steel’s long history is working against it, since many of the easy options for cutting its energy use have already been deployed. And the steel production process itself also produces carbon dioxide.

"The processes [in the European Union] are being operated near the thermodynamic limits," said Jean Theo Ghenda, climate and energy manager for EUROFER, the European Steel Association. ThyssenKrupp AG is a member.

Steel is an alloy of iron, carbon and other elements. Coal and steel are joined at the hip, since modern steelmaking requires coke, a byproduct of coal, though the last coal mine in Duisburg closed in 2009. The Duisburg steel mill draws as much energy as Berlin, a city of 4 million people, nonstop, all year round.

A blast furnace requires about 770 kilograms of coking coal for each ton of steel produced, and the iron and steel industry accounts for 6.7 percent of the world’s greenhouse gases, according to the World Steel Association. The global steel industry is projected to produce 2.5 billion metric tons of carbon dioxide each year by 2050, even including commitments from governments to curb greenhouse gas emissions, according to the Global Carbon Capture and Storage Institute.

"We think that by 2050, compared to the level of 2010, we have about 10 percent potential [for efficiency improvements] in an economical way," Ghenda said. "If we want to improve this process, we need breakthrough technologies."

Though steel can be recycled, there usually isn’t enough of it. "There’s also not enough secondary material to fulfill demand," he said. "Ask yourself where you get those scraps. When people compare both routes [recycling versus fresh production], they need to have that in mind."

As a result, many steel producers are looking to cut their carbon footprints outside of the mills, coming up with better ways to harvest raw materials and transport the finished product. "We are not only speaking about energy efficiency and carbon dioxide efficiency; we are talking about resource efficiency," said Ghenda.

Another strategy is a just-in-time model for steel production. "First we see the demand, then we see how to cover the demand," Ghenda said. In other words, the company doesn’t make more than it needs.

‘I don’t have the answer yet’

German legislators and public officials are also concerned about whether they can reduce emissions from their industrial sector, which accounts for one-third of the country’s energy use.

"When I talk to steel industries, I don’t have the answer yet on how to decarbonize this kind of business, but of course you know we have to do it," said Jochen Flasbarth, state secretary in the German Federal Ministry for the Environment, Nature Conservation, Building and Nuclear Safety, speaking on a panel in Washington.

"We also know a lot of processes in industry where we don’t have solutions, and this is where we need the most R&D," he added.

ThyssenKrupp ranks 19th among steel manufacturing companies, producing 17.3 million tons of steel in 2015, according to the World Steel Association.

While German steel can be expensive, transportation is a huge cost, so having a supplier close by is useful for European manufacturers. In addition, ThyssenKrupp produces more than 2,000 grades of steel, so many manufacturers that need a specialized version of the metal turn to them for a customized product.

The material has important ripple effects for the economy, since everything from cars and appliances to surgical equipment and buildings require steel. Steel prices can influence the cost of many goods, but shrinking its carbon footprint could propagate throughout all manufacturing sectors.

This is part of ThyssenKrupp’s strategy. The company is developing lighter and stronger versions of steel that may require more energy to produce but more than make up for it across the lifetime of a car, for instance, through fuel savings. "Aluminum wheels have a much higher CO2 footprint than steel in wheels for the same weight," said Lisa Mohr, an environmental analyst at ThyssenKrupp.

Carbon capture and storage may be the only other alternative for cutting emissions from steelmaking. The world’s first CCS system for steel went online this month in Abu Dhabi (Greenwire, Nov. 7).

Several countries are now experimenting with CCS systems for steel, but the process remains costly and has an energy footprint of its own.

Until the technology matures, one of the best ways to shrink steel’s impact on the environment is to make it using the cleanest sources of energy in the most efficient mills for applications that stand to have the greatest effects in cutting greenhouse gases.

Here is where ThyssenKrupp thinks it has a strong advantage and a bright future at the heart of German industry. "Producing steel here in Duisburg is better than producing it somewhere else," Mohr said.