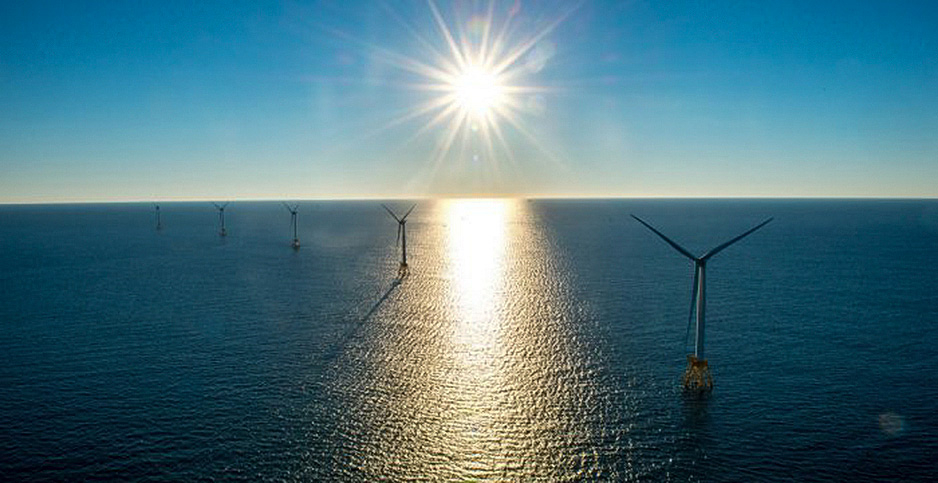 The sun rising at Block Island Wind Farm off the coast of Rhode Island. Deepwater Wind

In the new year, the first offshore wind farm in the United States will shut off its turbines, and its customers on nearby Block Island in Rhode Island will revert to diesel generation.

The rocky saeabed around Block Island has been worn away by tides and storms, sometimes exposing high-voltage cables in a popular swimming location that developers failed to bury deep enough when the facility was brought online in 2016. To splice in newly buried cables, the wind farm will go offline for a brief period this spring.

At $30 million for one leg of the fix and an undisclosed amount for the other, it’s a costly problem to crop up for the nation’s first offshore wind farm, and it’s not totally isolated.

High-voltage lines that will be buried at sea to carry power from the burgeoning offshore wind sector and inject it into the onshore grid represent the most complicated, and as yet uncertain, aspect of an industry poised to boom, experts say. From grid congestion to technical troubles, the offshore wind’s transmission challenge is the focus of growing attention as the industry advances.

"We cannot afford to develop the offshore grid in piecemeal," Judy Chang, the undersecretary of energy for the Massachusetts Executive Office of Energy and Environmental Affairs, said at a Federal Energy Regulatory Commission conference held on offshore’s transmission challenges Tuesday.

Block Island represents just 30 megawatts of power, a pilot project that preceded what could be a wind boom driven by state commitments to buy offshore wind and decarbonize power systems.

Northeastern states that have made offshore wind procurements include Maine, Massachusetts, Rhode Island, Connecticut, New York, New Jersey, Maryland and Virginia, with a total of 6,460 MW selected and a goal of 28,530 MW.

Additionally, New York, New Jersey and Virginia are in the process of procuring another 7,540 MW cumulatively.

"We need a solid plan to ensure our offshore and onshore can work together to support that vision," Chang said.

But the overarching federal and state planning as voiced by Chang has been cautioned by others who are worried about constraining a nimble industry with regulations.

Others like WIRES Executive Director Larry Gasteiger say that rules and planning processes already exist that can accommodate the addition of offshore wind.

"The one outcome to avoid is any action, no matter how well-intentioned, that has the consequence of slowing down the development and integration of offshore wind resources," he said at the FERC conference.

‘A bit of a disconnect’

The current coastal power and transmission system spreading densely in populated areas and sparsely across rural environs was not built with a large offshore wind industry in mind.

Regions of the coastline in the Northeast are supported with infrastructure to suit the population, not a fleet of offshore wind farms. A limited number of retired coastal power plants provide injection points for large power sources, but that’s not a comprehensive solution to avoid overloading and congesting the onshore grid system, said Brandon Burke, policy director for the Business Network for Offshore Wind.

"Right now, we have about 10 gigawatts of offshore wind project with off-take from state government, and we are already sitting and looking at this and saying, ‘How are we going to integrate this power into the onshore grid?’" he said.

In a white paper published this week, the Business Network for Offshore Wind pressed for a planned approach to the offshore cable issue, arguing that without clarity surrounding the transmission issue, it will be harder to build a supply chain in the U.S. to serve offshore wind farms. The organization is primarily an organization representing the offshore supply chain.

Burke said one of the challenges for the industry is that it takes time and investment to execute coordinated approaches, which may involve several states with different perspectives, power balancing authorities and incorporating federal oversight from the Interior Department to FERC.

And wind is in a bit of a hurry. States that have driven the boom in offshore wind proposals by offering subsidies and contracts for offshore wind power have rapid decarbonization goals to hit, Burke noted.

Many of those targets accelerate over the next few decades, like New York’s 2050 carbon-free economy pledge, which starts with 100% clean power by 2040. Most carry significant mile markers along the way, like Massachusetts’ 2016 commitment to procure 1,600 MW of offshore wind by 2027 and an additional 1,600 MW by 2035.

The Bureau of Ocean Energy Management estimates some 2,000 turbines could be constructed offshore within a 10-year period.

"There’s a bit of a disconnect between what the states are doing and the mechanics for transmission planning at the [regional transmission organization] level," Burke said. "In addition to that, you have issues between states, where states that are next door to each other don’t necessarily talk to each other."

The FERC conference highlighted the disconnect on solutions to challenges facing the transmission and cable side of the coming offshore wind boom.

"It’s no secret that our energy mix is changing and changing rapidly," Republican Chairman Neil Chatterjee said. "We have to be clear-eyed about these trends and proactively engage with stakeholders."

The commission convened over 20 representatives from states, federal agencies, industry, regional grid operators and nongovernmental organizations. FERC called for the technical conference after it dismissed a complaint the power line developer Anbaric Development Partners LLC had brought against PJM Interconnection LLC over access to the grid for offshore wind projects.

Stoel Rives LLP’s Jessica Bayles, who attended the conference, said one of the major takeaways was the call for states and regional grid operators to coordinate on transmission planning.

She also highlighted that some commenters suggested FERC could assist with challenges to offshore wind planning by convening a task force, while others shied away from that approach.

Others urged a "transmission first" planning process for offshore wind.

The idea is not new.

A decade ago, the Atlantic Wind Connection proposed a transmission backbone to run from Virginia to New Jersey, which the Brattle Group estimated at that time to represent cost savings overall of $1.1 billion in the PJM Interconnection. The proposal ran into significant regulatory and financial hurdles before it fell apart.

Today, the first round of offshore wind farms planned in the U.S. are proposed as direct ties into the grid, one by one.

Abraham Silverman, general counsel for the New Jersey Board of Public Utilities, said he thinks of the challenge to the grid as "jigsaw pieces that have to fit together to facilitate the delivery of offshore wind power to customers in an economically efficient manner, while minimizing the risk of environmental impacts and permitting delays."

Updating the onshore grid to accommodate the 15,000 to 20,000 MW of renewable resources Northern states already require through existing policies could cost $10 billion, according to Johannes Pfeifenberger, a principal with the Brattle Group.

"Without regional planning, we will not be able to update the onshore grid so it can integrate the offshore grid."

The conference closed after a marathon eight hours, with no clear path forward for the federal agency.

What happened with Block Island?

Block Island is leftover rock and gravel from a glacier’s ancient retreat. The seafloor surrounding it proved too rocky for the cost-saving technique that developer Deepwater Wind and utility National Grid PLC used to lay the Block Island cables.

State regulators had flagged that problem, but a state board ruled in favor of the developer’s proposal.

John Dalton, president of the consultancy firm Power Advisory LLC, said the technical issue is not one likely to be repeated in the region and called the point where subsea cables have to climb ashore as a common pinch point for environmental issues, if only because it’s "where offshore wind becomes most apparent to stakeholders."

The geography of the seafloor is a critical aspect of wind siting that happens at the federal and company level and can make whole regions unfeasible until technology advances — such as in the Gulf of Maine, where researchers are testing floating technology in hopes of bringing offshore wind power to the deep gulf.

Ørsted A/S — the Danish power company that acquired Block Island when it bought Deepwater Wind in 2018 — is bearing the cost of reburying the Block Island cable connecting its turbines to the island grid.

Spokesperson Lauren Burm declined to disclose the cost of the full project.

"The original cable was installed by a previous owner. Ørsted is focused on replacing the cable to achieve a greater burial depth," she said in an email.

National Grid, which owns the cable that connects the island to the mainland, will also charge customers of the Narragansett Electric Co. to address the problem. The utility said it was too early to know the direct cost to ratepayer bills, but it did not expect a significant upcharge. The Westerly Sun newspaper in Rhode Island reported the $30 million price tag for the cable reburying project that will hit National Grid.

Over the next few months, the companies will thread new portions of cable at 20 to 50 feet below the seabed, compared to the current 4- to 6-foot depths, according to National Grid. They will splice the old with the new in the spring, causing the temporary shutdown of the country’s only operating offshore wind farm.

The state is creating a task force to consider penning new regulations. It is preparing for the boom, when several additional offshore wind farms will lay cable through Rhode Island waters, she said.

"If we are going to put a positive spin on things, it’s going to be a learning experience," she said. "We want to make sure that for other companies this isn’t an issue: No one is inconvenienced. There are no safety issues. There is no shutting down of turbines to lay cables."