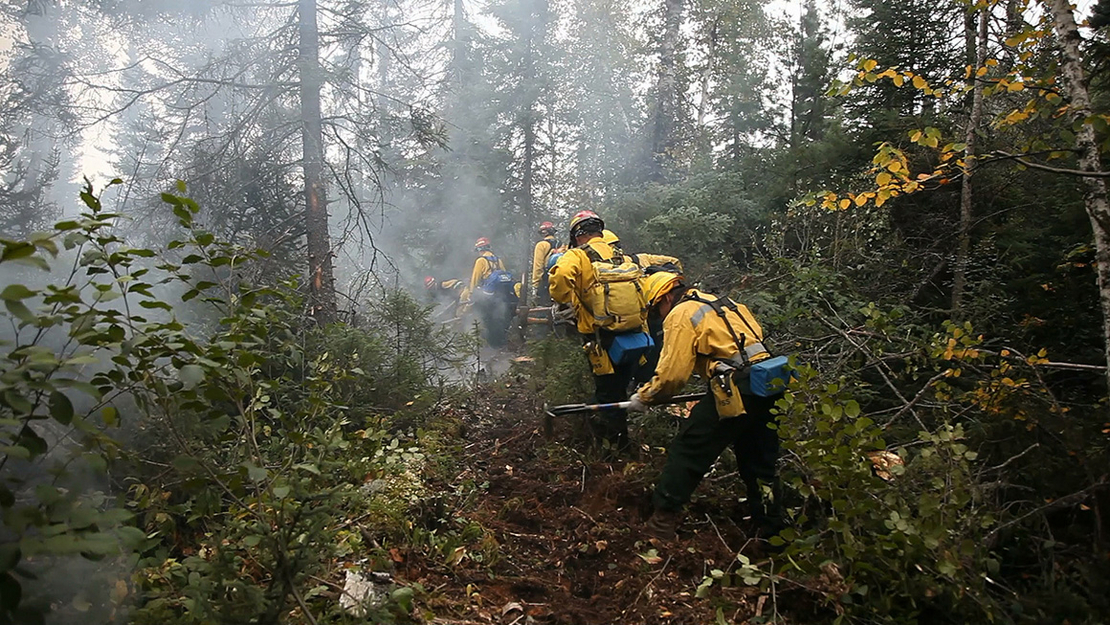 Less than a year ago, Superior National Forest in northern Minnesota was swept by wildfire, including parts of the 1.1-million-acre Boundary Waters Canoe Area Wilderness.

This week the same forest is being ravaged by floods — so much so that some portages and campsites are submerged in several feet of cold water.

Intrepid canoeists, a few of whom arrived in May for a dose of chilly backcountry solitude, are turning back. It’s hard to portage on a shrinking island.

“We haven’t officially closed any areas of the BWCAW but want visitors to be aware of conditions and prepared for flooding and fast-moving water,” Superior National Forest spokesperson Joanna Gilkeson wrote in an email.

Climate disasters are occurring across the nation’s public lands with unprecedented regularity and severity, experts say. National forests and grasslands from the Great Lakes to the Great Basin to New England are feeling the burden, and so are the people who manage them.

Jim Furnish, who spent 34 years in the Forest Service, including as deputy chief from 1999 to 2002, says he’s watched climate change affect wilderness areas such as Oregon’s Siuslaw National Forest for decades, long before global warming became a pressing issue.

But the frequency, size and complexity of climate disasters is head-spinning even to a seasoned forester like Furnish, who authored the 2015 book “Toward a Natural Forest: The Forest Service in Transition.”

“It just makes it more difficult to manage [forests] when there’s no norm to work with,” Furnish said this week from his home near the Gila National Forest in New Mexico. “It’s near impossible to identify what is normal, what is the standard, to try to develop management protocols when things are shifting right in front of us.”

Adding to the challenge for the Forest Service is its multipronged public mandate to manage the nation’s 193 million acres of national forests for three purposes: conservation, recreation and natural resource extraction.

These three priorities are often in conflict, Furnish noted. And when competing goals and policies are overlain with climate stressors such as drought, fire, flood, and migrating disease and pests, the stakes can get much higher.

“In my day, the big management issue was, ‘What national forest lands are we going to hyphenate next?’ Today it’s which forest is going to catch fire next,” said Steve Ellis, chair of the National Association of Forest Service Retirees. Ellis spent more than two decades in the Forest Service and Bureau of Land Management as both a lands manager and policy expert.

Ellis said climate disasters also are making it more difficult for the Forest Service to develop long-range plans, usually published every 10 to 15 years, because past and current conditions do not necessarily inform future conditions within a given forest.

Wade Muehlhof, a Forest Service spokesperson, said the agency’s 2012 Planning Rule created “a responsive planning process that informs integrated resource management and allows the Forest Service to adapt to changing conditions, including climate change, in managing the health, productivity, and sustainability of the national forests and grasslands.”

“Climate considerations are made during the assessment, plan content, and monitoring aspects of land management planning, and helps position the agency to deal with climate-related stressors such as wildfire, insects and disease, floods, and drought within the context of the agency’s multiple-use mission,” he said in an emailed statement.

Yet in many places the disasters are piling up faster than the Forest Service can respond to them.

Just last week, Forest Service Chief Randy Moore suspended for 90 days the use of prescribed burning in national forests after several controlled burns in New Mexico became wildfires (Greenwire, May 23). The order was issued even though the practice is widely viewed as a climate adaptation strategy since it clears highly flammable understory and reduces risk of larger, hotter wildfires.

Yet Moore noted in a staff memo that this year’s fire season already is stretching resources with 15 uncontained large fires nationwide.

According to an analysis by the Congressional Research Service, wildfires have burned on average 7 million acres annually over the last 20 years — more than double the 3.3 million-acre average during the 1990s.

Floods can be harder to quantify but are no less dramatic, and they are increasing in intensity and frequency, according to experts.

Another major Forest Service flood happened in 2013 in New Mexico’s Gila National Forest, when record-setting rain fell over the forest’s watershed, “leading to widespread and destructive flooding and debris flows” — including areas burned the previous year by the Whitewater-Baldy Complex wildfire, according to a U.S. Geological Survey assessment. The agency said side canyon tributaries and other small watersheds saw “mass wasting of sediment by way of debris flows.”

The Forest Service’s National Stream & Aquatic Ecology Center states on its website, “Our current understanding of floods is limited, existing approaches for estimating flood magnitudes are problematic, and hazards can be poorly communicated by technical specialists to decision makers and the public.”

The center is working to refine its modeling approaches around floods to allow for “better predictive capability for floods in different landscapes and settings.” The analysis also will help the service make more informed decisions about infrastructure design and investment, officials say.

A lesser-known but equally serious climate risk to national forests involves shifting forest biomes that allow pests and other nonnative species to invade and thrive in what once were highly adapted cold-climate ecosystems.

“Generally speaking, what national forest officers prefer is forests that have a lot of innate diversity and therefore resilience,” Furnish said. “As the Timex watch slogan says, ‘They take a licking and keep on ticking.’”