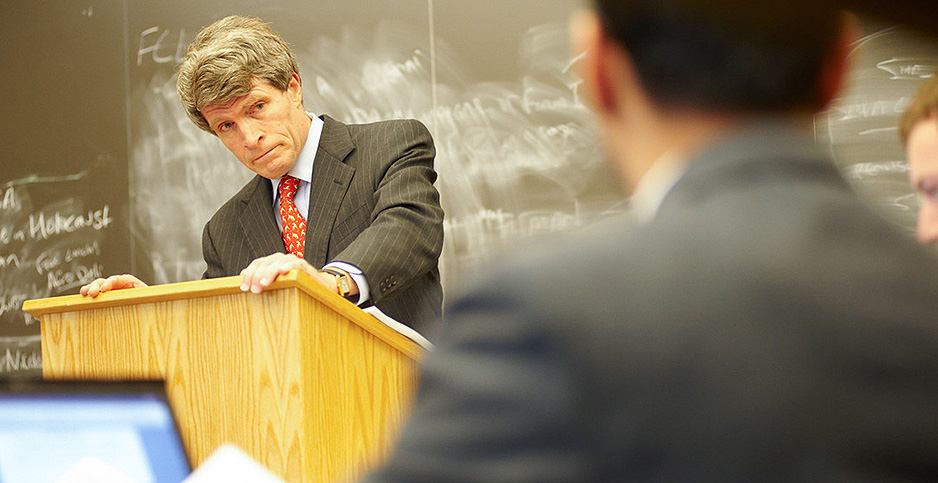 Richard Painter could be living a quiet life right about now.

Instead, the sharp-tongued former ethics guru for President George W. Bush has found himself an unlikely celebrity, part of what Washingtonian dubs the "nerd resistance" — a group of high-profile former ethics czars suing President Trump for violating the Constitution’s emoluments clause.

"I guess he thought I looked like a nerd," Painter said with a chuckle, referring to the author of the Dec. 10 article showcasing the professor in his house wearing a plaid sports coat, with a maroon and gold tie.

The 56-year-old law professor at the University of Minnesota already has his plate full. He’s a married father of three. He’s also at the center of more than 180 legal challenges to Trump and his administration as vice chairman of the left-leaning Citizens for Responsibility and Ethics in Washington.

The most high-profile of those cases involve three lawsuits against the president for failing to divest from his vast business empire. One was dismissed, but CREW is appealing (E&E News PM, Jan. 23). CREW in a recent report argues Trump’s current position creates a web of conflict and personal enrichment.

For Painter, a lifelong Republican who’s spent his career advising the likes of Bush 43 and writing books on maneuvering the world of ethics, the Trump administration is a rarity. He doesn’t view himself as leaving the GOP, but rather as having the GOP leave its own roots because of Trump.

"I have pretty strong opinions about the president," Painter said. "He ignores the Constitution, so we need to hold him accountable."

Painter recently took time off from a dizzying stream of interviews, ferrying his kids to soccer practice and walking his labradoodle, Goalie, to chat with E&E News.

How have you been personally affected by suing the president?

I get nasty emails every now and then. I have some law school classmates who probably aren’t too happy with me.

What are your chances of winning?

The real issue is, are the courts willing to take it on, or are they going to punt this on to Congress?

You’re Republican and fighting a GOP administration. Is that uncomfortable?

You just go back over the primaries, so many Republicans were angry at Trump, including Mitt Romney, who said he was a fraud. It’s just a question, once he’s elected, do people fall into line as a lot of the elected officials have done?

Or [there are] those of us who are independent and able to state what we really think, as many elected officials stated during the primaries.

You had shingles three years ago, what happened?

What the Trump people are doing is saying I had a stroke and saying that affects my mental capabilities. There was no stroke. It’s mostly comments on blogs.

Former Obama ethics czar Norm Eisen is chairman of CREW. Are you pals?

Yes. We met through ethics conferences after he came back from the Czech Republic, where he was ambassador. I talked to him on the phone when he was in the Obama White House.

What do you talk about when you hang out?

Well, the way we used to do it and how this is completely screwed up.

What’s something people don’t know about you?

Although I think, if the Republican Party survives, the younger generation’s going to go back to the type of Republican I am, as opposed to what we’ve been seeing over the past few decades.

You do a lot of interviews. Are you concerned about being overexposed?

No, I’m just worried about whether we’re going to do anything about President Trump and what’s going on here.

You were born in Philadelphia, raised in Kansas City, went to high school out East. What did your parents do?

My mom [Marion Homer] was a journalist; she worked for church magazines, things like that. My dad [William Hall Painter] was a lawyer and a law professor from Pittsburgh. My family’s originally from Pennsylvania.

Where did you meet your wife, Karen? She’s a professor of music history at the University of Minnesota?

She was an undergraduate at Yale College when I went to law school there in the 1980s. It was a party with friends. I just went up and said hi, started dating.

We have three middle-school-aged kids now. We drive them all over, soccer games, all that stuff. That’s what’s keeping us busy. We have a lot of fun.

You clerked for Judge John T. Noonan Jr. of the U.S. Court of Appeals for the 9th Circuit.

He was one of the people I admired the most. He passed away last year.

He was an expert on lawyers’ ethics, he was put on the 9th Circuit by President Ronald Reagan. Judge Noonan was known as a theologian as well as a lawyer, law professor, very highly regarded in the Catholic Church.

I think the financial conflicts of interest were the bulk of my work. There were situations I was frustrated when people didn’t come and talk to me, like the whole episode involving the U.S. attorneys who got fired and they really shouldn’t have been, but then I had to read about it in The New York Times and then deal with the aftermath.

And President Bush? What was it like to work for him?

I respect the president for telling people that ethics are important, that he was going to follow the advice of his lawyers on ethics. We clearly had the back of the president there.