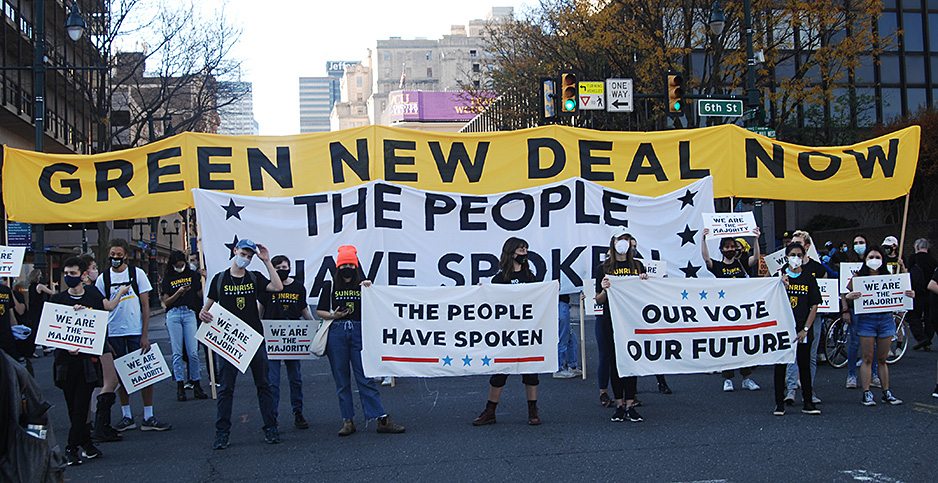 Looming behind the blaring car horns and fireworks that welcomed President-elect Joe Biden’s victory was the enormous challenge of fulfilling his campaign promises on climate change.

Biden won on a wave of unity among union workers, liberal activists and a diverse coalition of climate-minded voters who coalesced as an army against President Trump. That alliance, uneasy at times, carried Biden through the Rust Belt states where fracking and manufacturing are woven into the region’s economy. It helped him persevere in states like Arizona and Nevada where deadly heat waves and drought made aggressive climate policy a salient political message.

Joe Biden’s about to get whiplash from how quickly young people turn back into his harshest critics if he doesn’t deliver on the political mandate this election delivered.

Democrats achieved their goal of unseating Trump, but they suffered a series of down-ballot defeats that robbed them of the ability to erase Trump’s policymaking through Congress.

It’s true that renewable energy is booming and coal is in economic decline. But there are thorny challenges that the Biden administration will have to confront in order to meet its rapid timeline of hitting net-zero carbon in the power sector, like the growth of natural gas.

Then there’s the transportation sector, one of the steepest climate challenges Biden will confront. He said during the campaign that he won’t emphasize bans on cars powered by fossil fuels, but some heavy-handed policies seem inevitable if he’s going to zero out the sector’s emissions. If those are absent, progressives could rebel.

As moderates warn that Democrats risk blowback by going too far, progressives counter that moderates cannot take their base for granted. The voters who powered Democratic victories — even narrow ones — want the party to enact Biden’s climate plan, polls show.

"You can’t just tell the Black, Brown, & youth organizers riding in to save us every election to be quiet or not have their reps champion them when they need us. Or wonder why they don’t show up for midterms when they’re scolded for existing. [Especially] when they’re delivering victories," Rep. Alexandria Ocasio-Cortez (D-N.Y.) tweeted.

"He spent time during this campaign bringing people together around, around this climate plan," she said. "He was able to get the endorsement of groups like the Sunrise Movement and the endorsement of labor for this plan. It’s a big, aggressive plan."

It was a stark contrast to a day earlier, when Rep. Abigail Spanberger (D-Va.), who narrowly won reelection, screamed at the party’s progressive members, blaming them for almost losing her seat, and 15 others, to Republicans on Tuesday.

She said Democrats will "get f___ing torn apart" if the party’s message mirrors that of its most liberal members. Rep. Marc Veasey of Texas complained that statements from progressive members were used in negative campaign ads in vulnerable swing districts, CNN reported. A fracking ban was key among them.

"The climate issue is a big issue for us; it’s also a jobs issue," she said. "We can create good-paying green jobs, preeminent in the world in green technologies, and we advance it as a health issue, clean air, clean water, as a national security issue to protect habitat and resources and to prevent migration that causes unrest as well as a moral issue. But when we’re doing it, we have to have everybody at the table."

If climate action stands to be a Democratic priority, its path through Congress will likely look similar to the last four years, barring a Democratic sweep of Georgia’s two Senate runoff elections Jan. 5.

That’s the same reason progressives see them as insufficient.

"It’s not that we anticipate having to go to absolute war on day one," said an aide to a progressive lawmaker.

Pelosi hasn’t done much to push climate action among reluctant lawmakers, the aide said, like in the Agriculture Committee. (That committee is set to get fresh leadership after its chairman, Minnesota Rep. Collin Peterson, lost reelection.)

On the other hand, the speaker has shown that she’s willing to bring climate to the floor, so the climate policy that has already passed the House could be a baseline to judge whether Democrats are following through.

"I think you’ll see this ongoing battle of attrition" to enact the policies House Democrats passed over the last two years, the aide said. "It’s easy to pass things when you don’t think they’ll go anywhere."