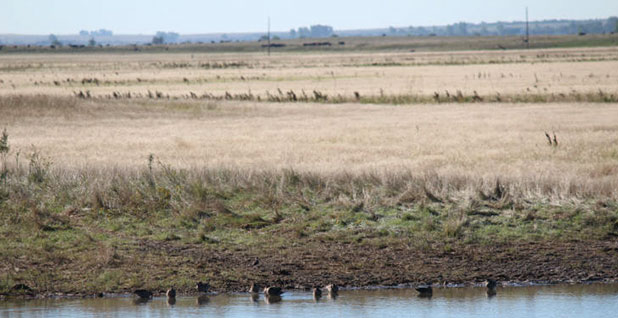 The Fish and Wildlife Service has taken the first of what it says will be several actions to "modernize" its wetlands easements program.

The agency will begin using electronic mapping to discern boundaries of conservation easements of wetlands predating 1976 for the first time this year, according to guidance issued by FWS last week.

Those easement deeds have not included any maps of their boundaries but rather verbal descriptions of conservation areas, which FWS said can lead to confusion and disputes with landowners. The guidance also establishes the first process for landowners to dispute the easements and their boundaries.

The Department of the Interior says it will soon take additional steps to explain how it calculates mandatory setbacks for draining farmlands near conserved wetlands and how and when FWS pursues legal action when those setbacks are violated.

FWS Principal Deputy Director Margaret Everson said in a statement the guidance shows that the agency "is committed to being a good neighbor and ensuring we meet our obligations to private landowners who have granted wetland easements on their lands."

Created by the Migratory Bird Treaty Act and the Fish and Wildlife Coordination Act and funded by duck stamps, FWS wetlands easements are commonly used to protect critical breeding and rearing habitat for waterfowl in the Prairie Pothole Region of the Dakotas, Iowa, Montana and Minnesota.

Under the agreements, landowners are paid to protect wetlands on their property and refrain from draining, filling, leveeing, burning or otherwise damaging them. If wetlands dry up naturally, however, they can be farmed, grazed or hayed. The easements are perpetual, transferring to new owners whenever land is sold.

There are thousands of landowners with wetland easements established prior to 1976, according to Interior.

Republican North Dakota Sens. Kevin Cramer and John Hoeven have long advocated that FWS create an appeals process for the easements that would reduce civil litigation costs for farmers wanting to challenge the easement determinations.

The pair hosted Interior Secretary David Bernhardt at a roundtable with rural landowners this fall.

Cramer said the issue was a priority for him when he took the helm of the Environment and Public Works Subcommittee on Fisheries, Wildlife and Water, telling E&E News last spring that wetlands easements have been particularly problematic in North Dakota, which is pockmarked by shallow prairie pothole wetlands critical to waterfowl breeding.

FWS "doesn’t just take [wetlands]; they restrict farming around it and close to it. They are not friendly about it. We have had hundreds of complaints," he said (E&E Daily, March 29, 2019).

He has called on FWS to take a "more farmer-friendly approach" and applauded the changes in a statement today.

"We appreciate the efforts of Secretary Bernhardt regarding perpetual easements and wetlands determinations at the USFWS," he said. "Our landowners, including farmers and ranchers, deserve due process without having to bear the burden of costly litigation. We look forward to continuing our work with the administration to ensure these reforms provide an adequate appeal process and much-needed regulatory relief."

Bernhardt said, "I appreciate the leadership of Sens. Hoeven and Cramer in bringing this issue to light as we have taken action to minimize needless conflict with farmers in protecting waterfowl.

"President Trump and I are committed to ensuring that we have a government that better serves the American people and is responsive to addressing real concerns," he added.

But not everyone is as enthusiastic about the change.

Julie Sibbing, with the National Wildlife Federation, said her group is supportive of modernizing mapping for older easements "so that everyone is on the same page regarding easement boundaries."

But, she said, her group is wary of the ongoing effort from FWS to make changes to the easement program and wants to ensure that those changes don’t leave wetlands vulnerable to conversion to farmlands or oil fields.

"Many of these easements were purchased using duck stamp fees collected from waterfowl hunters," she said. "Any attempt to undermine the wetland value of these easements would represent an unwarranted loss of taxpayer investment in this invaluable resource for our nation’s migratory waterfowl and other wildlife."

Ryan Taylor, director of public policy with sportsmen group Ducks Unlimited, said he supports the changes that have been made thus far.

"We appreciate a lot of what we see here, and we also want certainty and clarity on these maps," he said. "Those of us who appreciate the resource alongside farmers and ranchers want to have that resource and the ability to see where the boundaries are."

He said he would reserve judgment on FWS’s next steps regarding easement setbacks until he sees the specifics of the proposal, saying his group would "look out for the investments that have been made by duck hunters and the folks that buy duck stamps." But, he said he believes that all parties — farmers, ranchers and FWS staff included — understand the importance of protecting important waterfowl habitat.

"We want to make sure there is long-term sustainability for waterfowl across the landscape and we know the landscape is worked by farmers and ranchers, and they are our partners in this effort," he said.