G-20 leaders step up but not enough ahead of COP 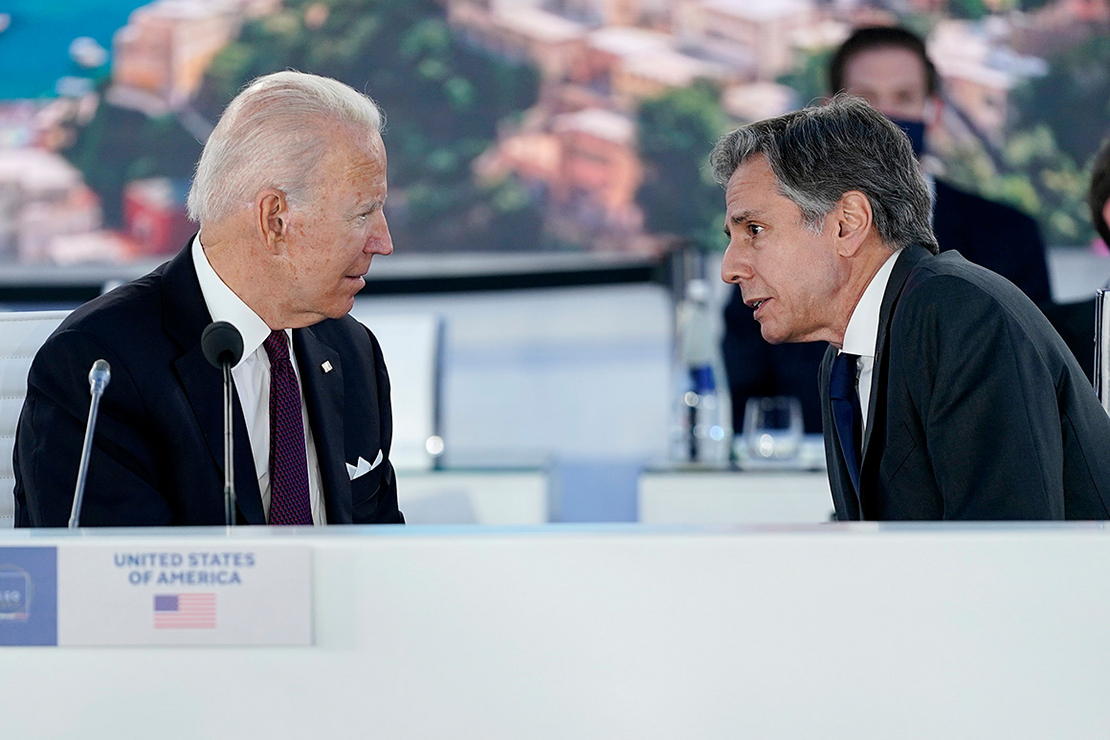 President Biden speaks with Secretary of State Antony Blinken as he hosts an event yesterday about global supply chains during the Group of 20 leaders' summit. AP Photo/Evan Vucci

A concrete plan to protect the world from climate change will have to wait for a few days — at least.

Leaders from most of the world’s biggest economies emerged from two days of talks in Rome this weekend with little advancement on how to address global warming. The lack of progress at the Group of 20 (G-20) summit puts even greater pressure on international climate talks that opened yesterday in Glasgow, Scotland.

“I leave Rome with my hopes unfulfilled — but at least they are not buried,” wrote U.N. Secretary-General António Guterres yesterday in a Twitter post.

Broadly, there was recognition at the G-20 summit that climate change is an existential threat to humanity, and that the global community needed to respond to the dangers posed by a hotter planet.

A joint communiqué issued by G-20 leaders reaffirmed their commitment to the 2015 Paris climate agreement goal of limiting global warming to “well below” 2 degrees Celsius and to “pursue efforts” to limit it to 1.5 C from preindustrial levels.

They also committed to zero out greenhouse gas emissions “by or around” midcentury and to end public financing for new, unabated international coal power generation over the next two months — advancing a pledge Group of Seven countries made in June.

“We recognize that the impacts of climate change at 1.5°C are much lower than at 2°C,” the communiqué stated, pledging further efforts over the next eight years. “Keeping 1.5°C within reach will require meaningful and effective actions and commitment by all countries,” it added.

The statement is an incremental step forward, but critics said it was less ambitious than needed. It sets the stage for a tougher battle at all important climate talks known as COP 26 that will take place over the next two weeks.

“Much hard work — especially on issues of climate finance — remains ahead if COP 26 is to reach agreement on concrete ways to address the huge gap in ambition between what countries have currently committed to under the Paris Agreement and what is needed to keep 1.5°C alive,” said Alden Meyer, a senior associate at the climate think tank E3G.

The statement coincided with the release of a White House long-term strategy to achieve net zero by 2050. The 65-page document announced yesterday outlines U.S. actions that can help prevent global temperatures from rising above 1.5 degrees Celsius. It points to scaling up CO2 removal and discovering carbon-free technologies, and it says large investments by the federal government, universities and businesses can rapidly accelerate emissions reductions.

"The science is clear: we are headed toward climate disaster unless we achieve net-zero global emissions by midcentury," the strategy says.

The G-20 includes the world’s largest greenhouse gas emitters — China, the United States and India — as well as major fossil fuel producers such as Saudi Arabia, Indonesia and Australia. Together, those 20 countries account for around 75 percent of global emissions.

A 2018 report by the United Nations global scientific body emphasized the need to aim for the 1.5 C threshold to avoid increasingly severe wildfires, droughts, floods and sea-level rise that would come with each additional degree of warming.

Last month, a coalition called Like-Minded Developing Countries — which includes China and Saudi Arabia — issued a statement that accused developed countries of shifting the goal posts of the Paris Agreement by calling for all countries to adopt net-zero targets by 2050. India’s environment minister said setting net-zero targets was not a solution to combating climate change (Climatewire, Oct. 29).

“What the G-20 have done yesterday and today and throughout the year … is a step forward in a long, difficult transition,” he said. “Do we know exactly what the final goal posts of this transition are going to be? We don’t. So we go step by step.”

Many of the G-20 countries have set a 2050 net-zero target. China, the world’s largest emitter, submitted formal targets to the United Nations on Thursday that aimed for before 2060 — despite a strong push by the United States and other countries for it to move faster.

India has not set a carbon neutrality deadline.

“We’re stepping forward in ways that are going to make it extremely difficult for people not to raise their ambition on an ongoing basis here,” he said.

But there is frustration, too, in the lack of progress by the United States.

Congress still hasn’t passed key pieces of legislation that would ensure the United States achieves its target of cutting emissions in half by 2030 to bring it in line with the goals of the Paris Agreement.

Biden, for this part, said yesterday that he was confident that Congress soon would pass major spending bills that include hundreds of billions of dollars to address global warming. But he also wagged his finger at other world leaders.

“More has to be done, but it’s going to require us to continue to focus on what China’s not doing, what Russia’s not doing and what Saudi Arabia is not doing,” Biden said at a press conference.

While G-20 leaders did agree to end overseas coal financing, they couldn’t come to an agreement on ending domestic coal use — a major sticking point for coal-dependent countries. To reach the goals of the Paris Agreement, the International Energy Agency says industrialized economies must end coal use by 2030.

The G-20 communiqué also did not address how or when countries would end fossil fuel subsides. It did, however, highlight the need to reduce emissions of methane, a powerful, short-lived greenhouse gas that is the second-largest contributor to climate change after carbon dioxide.

G-20 leaders also agreed to scale up financing for adaptation and improve access to those funds. But they did not go further on delivering $100 billion in climate finance they promised annually to developing countries starting in 2020.

Last week, the world’s richest nations acknowledged they would only reach the $100 billion promise starting in 2023 (Climatewire, Oct. 26). G-20 leaders said yesterday that they aimed to hit the goal “as soon as possible.”

That may not be enough to rebuild trust eroded by past broken promises.

“When they sit down with leaders of the rest of the world, they would be in a far better position to get them to do their part of the bargain if they’d already kept their promise to come up with the $100 billion,” said John Kirton, a political science professor at the University of Toronto and co-director of the G20 Research Group.

Now talks will set the pace for the next decade of action aimed at lowering global greenhouse gas emissions and providing money and support to help low- and middle-income countries transition to clean energy and respond to the impacts of climate change.