Gina McCarthy is leaving. Who will take her place? 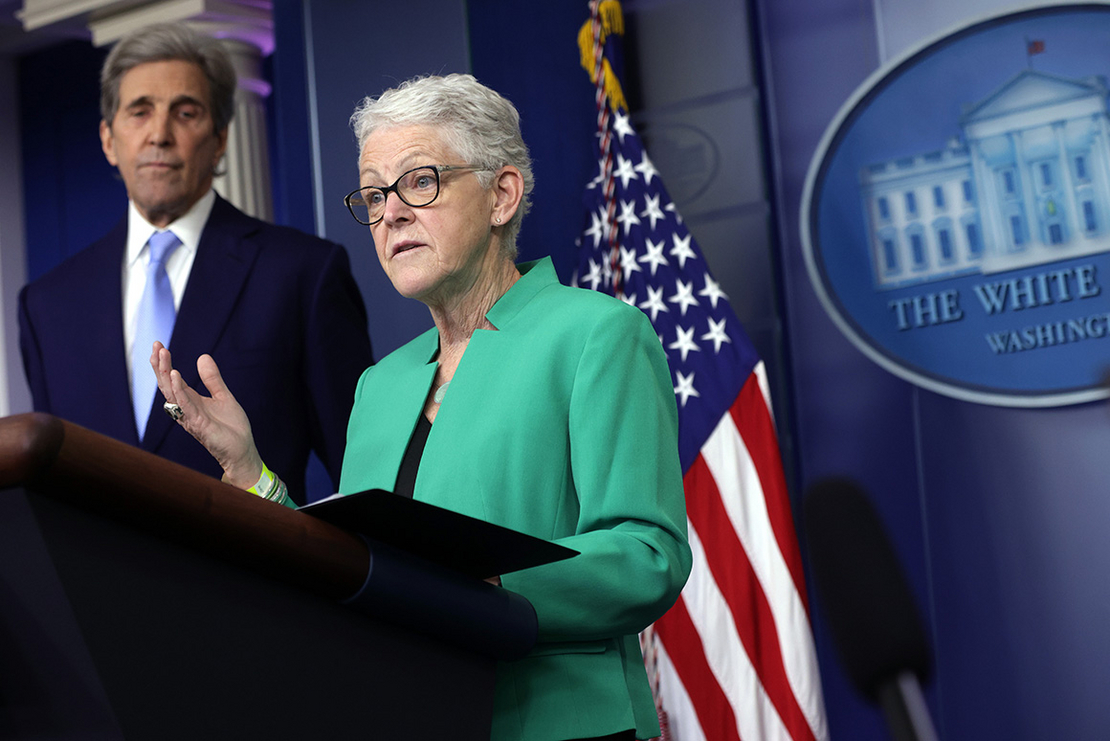 The race is on to see who could replace national climate adviser Gina McCarthy, shown speaking at the White House in 2021 as John Kerry, special presidential envoy for climate and former secretary of State, listens. Alex Wong/Getty Images

Gina McCarthy’s expected exit from her post as the White House’s top domestic climate policy adviser has prompted speculation about who will fill her shoes with much of President Joe Biden’s climate agenda unfinished.

McCarthy hasn’t publicly announced a time frame for her departure, but she’s expected to step down in the coming weeks (Climatewire, April 4). Her exit would create an opening for a policy expert charged with coordinating the administration’s efforts to combat climate change across the federal government.

Energy and environment insiders are already talking about who comes next and how that person will affect Biden’s climate plans. They could be instrumental in trying to woo reluctant lawmakers into compromising on sweeping legislation, or — perhaps more likely given the legislative stalemate — they could be central to coordinating climate action using executive authorities that don’t require cooperation from Congress.

E&E News spoke to seven insiders about a possible McCarthy replacement. Those people were granted anonymity to speak about a personnel decision that hasn’t been announced publicly.

Zaidi is widely viewed as the front-runner for the job, but it’s not a sure thing.

McCarthy responded last month to press reports about her looming departure by tweeting that she hadn’t resigned and had “much more work to do.” She also said in an interview on April 22 that she wouldn’t be at the White House “until the end of my days,” and she suggested she plans to stay involved in climate policy after she leaves the administration (Greenwire, April 22).

Asked for comment about a departure date and plans for McCarthy’s replacement, White House spokesperson Vedant Patel pointed to McCarthy’s tweet. He said in an email “there are no plans for her departure or anything — so your story, and your reporting are pre-mature.”

When she does step down, insiders say it’ll be tough to fill McCarthy’s shoes, given her experience running EPA and her sway with environmental groups. She left her post as president and CEO of the Natural Resources Defense Council to join the Biden White House.

“I think the person who comes behind her should recognize they are not Gina McCarthy,” said Kevin Minoli, a former top EPA career attorney who worked with McCarthy. “She is a well-regarded person who is well known. The next person is likely not going to be as well known as her.”

Since the news broke she was eyeing the exit, McCarthy has been active on Twitter, posting about activities and actions at EPA, DOJ, and the Interior and Energy departments.

The next climate ‘czar’

A similar succession could take place if McCarthy’s deputy Zaidi gets the job. He was New York’s deputy secretary for energy and environment before he joined the Biden team. He spent the Obama administration working on energy and climate issues in the White House and DOE.

He’s also had short stints at law firms and has drawn criticism from greens for his past ties to fossil fuel interests. Observers note a key part of the role is outreach with environmental groups. Even still, the job has been described as his to lose.

Podesta is another possible contender to replace McCarthy inside Biden’s West Wing. He’s a Democratic insider with environmental policy chops who has done a version of the job before.

The founder of the Center for American Progress and former chief of staff to President Bill Clinton joined the Obama White House in 2014 and oversaw the climate portfolio until he left to work on Hillary Clinton’s presidential campaign. He has deep ties to green groups and is well known on Capitol Hill.

Another name floated to replace McCarthy is Goldfuss, who works with Podesta at CAP; she’s the organization’s senior vice president of energy and environment policy. As CEQ’s managing director, she worked on the Obama administration’s climate initiatives. She also served as deputy director of the National Park Service.

They’re both close to the administration. Both Podesta and Goldfuss attended gatherings at the Biden White House last year, visitor logs show. Podesta met with Biden and McCarthy during group meetings; Goldfuss also attended an event with Biden.

A CAP spokesperson declined to comment on whether Podesta or Goldfuss are in contention for the White House climate gig.

White House watchers have also floated Moniz’s name. He’s a founding director of the Massachusetts Institute of Technology’s Energy Initiative and he returned to the university after leaving the Obama administration.

In an interview last year, Moniz laid out his ideas for where the Biden administration should focus its climate and energy efforts.

People familiar with his nonprofit Energy Futures Initiative noted the organization is currently deeply involved in several ongoing energy research projects and said such a move would be surprising.

Picking Moniz for the job would also irk environmentalists who warned Biden against naming him as Energy secretary due to his fossil fuel ties (Energywire, Nov. 25, 2020).

Granholm, Biden’s energy secretary and the former Michigan governor, has been mentioned as another possible contender. One major obstacle to appointing her to the White House position would be that Biden would lose a Senate-confirmed Cabinet secretary, opening up a slot where the president would be forced to invest political capital to get another secretary confirmed.