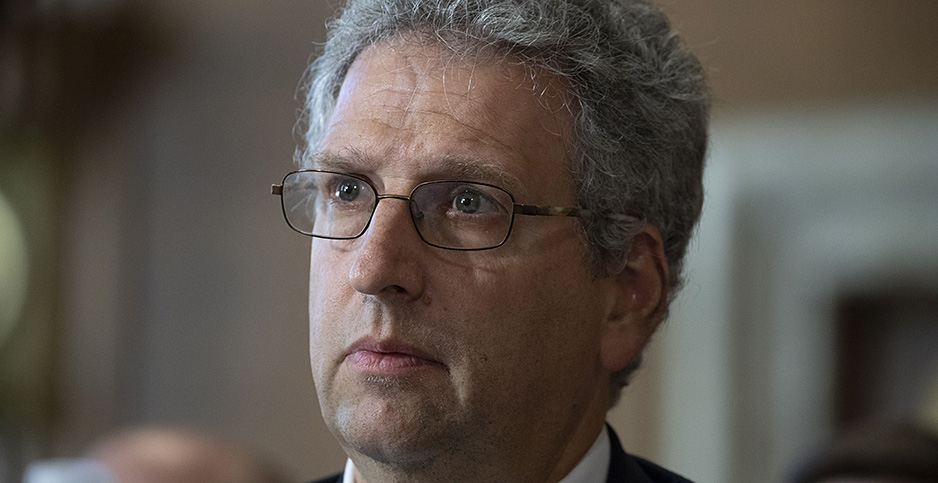 Federal Energy Regulatory Commission Chairman Richard Glick has said he will create a senior position dedicated to addressing environmental justice and equity concerns at the agency.

Though the Democratic chairman’s announcement yesterday offered few details, he said, "This position is not just a title," suggesting the coordinator could shape FERC’s oversight of natural gas infrastructure, electric transmission lines and other big energy projects.

"I believe the commission should more aggressively fulfill its responsibilities to ensure our decisions don’t unfairly impact historically marginalized communities," Glick said yesterday on a call with reporters during which he discussed a wide range of goals he has as chairman. "I will do what it takes to empower the new position to ensure environmental justice and equity concerns finally get the attention they deserve."

Glick is joined by Democratic Commissioner Allison Clements, along with Republicans Neil Chatterjee, James Danly and Mark Christie. Biden will have a chance to appoint a third Democrat this summer when Chatterjee’s term expires.

During the call yesterday, Glick addressed Biden’s proposal to zero out power-sector emissions by 2035. He also talked about his main priorities as chairman, including market reforms, transmission build-out, greenhouse gas emissions accounting and cybersecurity. Here are the top issues Glick discussed:

And while FERC has often documented negative impacts to front-line communities when evaluating infrastructure proposals, the agency has never rejected a project on environmental justice grounds (Energywire, July 1, 2020).

Studies show that Black, Indigenous, Latino and low-income white communities are significantly more likely to bear the brunt of environmental pollution caused by, among other sources, energy infrastructure when compared with their more affluent, predominantly white counterparts.

Glick’s creation of an environmental justice role at FERC could change the agency’s calculus in reviewing projects, though the chairman said he would offer more details at a future date.

"Environmental justice and equity needs to be taken into account in all of our decisionmaking processes," Glick said. "This new position will be responsible for ensuring we do just that."

The Biden administration has set an ambitious goal to eliminate power-sector emissions by 2035.

While FERC, as an independent agency, is fuel neutral, Glick said he thinks Biden’s plan is "feasible."

"There are a lot of people interested in aggressively reducing greenhouse gas emissions, and it isn’t just environmental organizations," he said. "These are big corporations, a lot of smart people and smart scientists, and I think people are going to be able to figure it out and get it done."

Glick said FERC will have to ensure that the nation’s power markets do not unduly discriminate against new energy technologies, such as battery storage. He also said the commission has a duty to understand the energy industry’s direction.

"There’s going to be a lot more demand for electricity, both with electrification and demand for cleaner resources," he said. "We have to figure out policies that will hopefully promote a greater investment in the transmission grid to facilitate access to cleaner resources."

Meeting clean power policy goals will require a major build-out of high-voltage transmission lines, Glick said, noting that the panel has significant authority over such projects under the Federal Power Act.

"At the same time, we need to expedite the generator interconnection process, which takes far too long for many reasons," he said, referring to the way new resources like large-scale wind farms link up with the wider grid.

"Essentially, utilities have an incentive to build shorter, reliability, supplemental project-type lines, because in those cases, they don’t have to subject those particular projects to a competitive bidding process," he said. "So we need to figure out a way to address what I think is a disincentive."

The federal-state tension came to a head in 2019 when FERC implemented a market rule in the PJM Interconnection, the nation’s largest regional grid operator. The minimum offer price rule, or MOPR, blocks sources of generation that receive government subsidies — like many wind and solar farms — from competing in capacity markets.

Such markets offer a way for grid operators to secure enough power generation to meet demand in the future. Generation resources like a coal plant or wind farm bid into periodic auctions to qualify to provide future electricity.

"There’s a recognition that the MOPR process in general is just not sustainable," Glick said. "We’re going to work with the [regional grid operators] to the extent we can and figure out a better approach that accommodates and not blocks state policies."

Another top priority is improving the commission’s approach to siting interstate natural gas pipelines and liquefied natural gas facilities to ensure that these projects are both needed and in the public interest before they are approved, Glick said.

"I’ve said it a million times, and I know people don’t believe me. Some people out there say, ‘He’s against all pipelines,’" Glick said. "That’s simply not true."

He said his "beef" with the commission is that in the last few years, the panel has refused to consider whether greenhouse gas emissions are significant from a climate change perspective. Critics have warned that the agency may overstep its statutory authority if it wades into regulating carbon dioxide based on climate concerns.

Glick has long criticized FERC’s approach to weighing carbon emissions in its decisions. He said he is still speaking with commissioners about how best to take on the issue, whether by updating the 1999 policy statement the panel uses to guide its permitting progress or through an order.

The chairman said he would also be prioritizing the newly created Office of Public Participation, which Congress directed FERC to create in an omnibus spending package passed late last year (Energywire, Dec. 23, 2020).

The office is intended to ease public participation at FERC, whose technical work can be difficult to follow and often plays out behind closed doors.

Glick said he would have more to share about the new office during next Thursday’s monthly FERC meeting, his first as chairman.