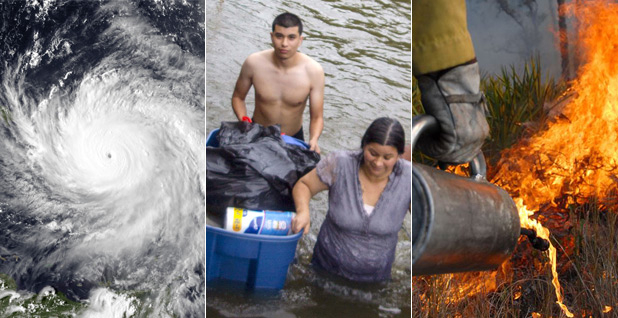 Congressional Republicans left town yesterday still giddy over their historic win on tax reform, but what was somewhat overlooked in the rush to head home for the holidays was another significant milestone.

Lawmakers are hoping to pass record amounts of disaster spending in January. The GOP-led $81 billion disaster supplemental would set a record for the most emergency spending to deal with natural disasters in a single year.

The House passed the supplemental last night, 251-169, and the Senate is expected to vote on the package when it returns from holiday break.

When added to the $7.85 billion and $36.5 billion packages that have been enacted since September, that’s $125 billion in deficit spending to cope with extreme weather events that scientists have predicted for years would be the hallmark of a changing climate.

The Trump administration has said spending federal dollars on climate change is a waste. But many see the unprecedented supplemental, with additional disaster funding requests expected in the new year, as a direct manifestation of the incurred costs of global warming — and a taste of what’s to come — regardless of whether GOP lawmakers name it as such.

"The contributing factor is climate change," said Rep. Raúl Grijalva (D-Ariz.), ranking member on the House Natural Resources Committee. "And while there won’t be a public acknowledgement of that by Republicans, it’s obvious by implication, it’s both implicit and explicit, that that’s why we are having to pony up this amount of money."

Climate change impacts are already costing the government money, and these costs will likely increase over time as the climate continues to change, according to the report (E&E Daily, Oct. 25).

"The costs that we’re facing are staggering," Sen. Lisa Murkowski (R-Alaska) said yesterday of the "double whammy" of hurricanes that destroyed broad swaths of Puerto Rico and the U.S. Virgin Islands, not to mention the costs of Western wildfires, which currently are not eligible for monies from the federal disaster relief fund.

As chairwoman of both the Interior-Environment Appropriations Subcommittee and the Energy and Natural Resources Committee, Murkowski said she is currently focused on sorting out some of the budgeting issues surrounding natural disasters, including ending the practice of "borrowing" from non-fire federal accounts to pay for wildfire suppression.

Just this week, she said a tally of wildfire costs for this season totaled $2.2 billion. "This is $800 million more than the highest fire year that we’ve had," she said.

Aside from the cost of wildfires, Congress has had to repeatedly refill the Federal Emergency Management Agency’s disaster relief fund, which has run dry in the aftermath of the trio of hurricanes that slammed Texas, Florida and the U.S. Caribbean territories.

Additionally, the National Flood Insurance Program is still billions of dollars in debt from 2012’s Superstorm Sandy, and the program is already feeling the strain of this fall’s hurricanes, as well.

There’s a growing sense among lawmakers from both parties that the federal statute that guides how those funds are spent — the Stafford Act — needs to be revised to ensure that rebuilding efforts are designed to limit "future risks" from extreme weather events.

Murkowski said she recently talked with White House budget director Mick Mulvaney about Stafford Act issues, which she said "are limiting as we try to deal with the cost of some of these disasters."

"I think you’re going to see work on that in the new year, but our reality is that we’ve got disasters that are coming at us that are far more costly, we’re seeing far more of them," she said.

Putting aside the "immediate" pain from hurricanes and wildfires, Murkowski said she’s also very cognizant of "the slow-moving disasters" that she sees in Alaska, where because of climate change "we have less sea ice, more wave action, greater erosion, communities that are in need of relocation because they are falling into the water."

"And so how we deal with that on top of the more headline-grabbing disasters that we see, we’ve got some real challenges in front of us," she said. "And in my view, we don’t have a funding mechanism or system in place to adequately address it."

A ‘silly’ premise or a necessary discussion?

While there is a rising bipartisan recognition that stronger mitigation efforts may be needed, Murkowski is one of the few Republican lawmakers who will bring up climate change unprompted. Many Republicans who are supportive of the supplemental see the vast costs as circumstantial and unrelated to global warming.

Rep. Dana Rohrabacher (R-Calif.), who has been leading Capitol Hill skeptics of climate change, said attempts to link a changing climate with natural disaster intensity is a ploy by liberal Democrats seeking to politicize "any issue" to gain global government control.

"The crassness in blaming natural disasters on climate change is a cruel joke to the American people," he said. "But in terms of our tax thing, we should take care of people who are in emergency situations because these emergencies have happened numerous times in our history. The history of mankind is replete with them, and they have had nothing to do with global warming."

Rep. Paul Tonko of New York, a top Democrat on the Energy and Commerce Subcommittee on the Environment, however, said if Congress doesn’t address climate change writ large, it should be prepared to continue dishing out disaster-related funding.

"The dryness in the West, the overwhelming storms back to back in the territories and in Texas and Florida — all are speaking to us," he said, referring to Hurricanes Harvey, Irma, Maria and Jose that impacted Texas, Florida, Puerto Rico and the Virgin Islands, respectively. "We need to just [be] open to the discussion of climate."

The supplemental also includes more than $20 billion for mitigation efforts, a move Democrats see as essential to address climate change. Republicans put up a fight when Democrats sought similar funding in the wake of Superstorm Sandy. But GOP lawmakers say this situation is different.

"This is just an example of, again, Texas is the No. 2 state in population. [The hurricane] hit the largest population area in the state. And Florida is No. 3. And it hit the whole state of Florida, so it’s going to cost more," he said.

Bishop chalked up the Sandy supplemental brawl to "a lot of things" that found their way into the relief package.

"That was really because of all the extra things that were part of what was called mitigation, it had nothing to do with hurricane stuff," he said. "I think this [bill] is cleaner, but I’m not sure about it. And the devastation is greater, simply because the infrastructure [in Puerto Rico] was less to begin."

He added: "Puerto Rico had some great building codes. They weren’t being used. If they’d built up to code, they would have had a lot less damage."

Conservative groups seeking to alleviate the deficit urged lawmakers to vote no, given the lack of funding offsets.

"Once again, Congress is trying to ram through a huge spending bill with little warning, claiming that offsets are not needed because it’s an ’emergency,’" the Club for Growth said in a statement.

"This profligate spending needs to stop. This bill further proves that politicians addicted to more spending with little accountability use the ’emergency’ designation to obfuscate their fiscal irresponsibility."

"Part of it is the fact that many of us here, specifically the members of the Climate Solutions Caucus, have really raised awareness about this issue and kind of pushed most Republicans past the silly issue of whether or not climate change is real," he said.

"People recognize it now, they know we have to do something about it, there’s a lot of debate about what, but we are past that unfortunate period when most Republicans would ignore the issue or deny that it’s a reality."