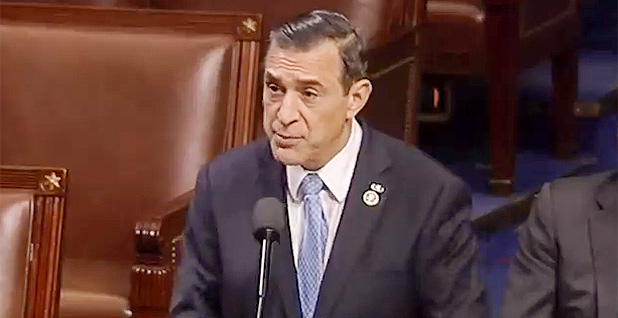 Two days into the 115th Congress, House Republicans are well on their way to slashing federal regulations that they say are antiquated, costly and curtail economic growth.

The House yesterday passed the "Midnight Rules Relief Act," largely on a party-line 238-184 vote. It authorizes Congress to overturn regulations finalized in the last days of the Obama administration with a single vote.

Four Democrats joined their GOP colleagues in support: Reps. Henry Cuellar of Texas, Collin Peterson of Minnesota, Kyrsten Sinema of Arizona and Josh Gottheimer of New Jersey, a freshman. Not a single Republican opposed the measure.

Meanwhile, the House is one step closer to passing the "Regulations From the Executive in Need of Scrutiny Act," which requires congressional approval of measures with an estimated annual economic impact of more than $100 million.

And House Republican leaders and rank-and-file members are beginning to strategize on employing the Congressional Review Act to attempt to block dozens more of President Obama’s regulations. The leader of the conservative House Freedom Caucus said the group hopes 300 rules can be scrapped with that parliamentary maneuver.

The "Midnight Rules Relief Act," H.R. 21, introduced by Rep. Darrell Issa (R-Calif.), would bundle final rules under one expanded Congressional Review Act joint resolution of disapproval, allowing for the en bloc disapproval of multiple regulations that would otherwise be subject to individual review under a simple CRA.

The CRA only requires a simple majority to pass, making it an ideal vehicle for roll-back supporters.

House Judiciary Chairman Bob Goodlatte (R-Va.), who has been spearheading regulatory reform, decried President Obama for "hastily cobbled together" last-minute rules issued in the "waning weeks and months" of his administration. He said in the week of Dec. 12, 2016, alone, the administration released 18 "midnight" rules, costing the economy $2 billion.

"These regulations are particularly susceptible to abuse and thus have an even greater potential to undermine job opportunities, wages and American competitiveness," Goodlatte said from the floor.

"As a new Congress and president begin their terms, both, understandably, must be focused on implementing the new priorities within the mandates the voters have given them," he said. "That doesn’t always leave time for cleaning up all of the last acts of the departing administration."

"These aren’t midnight rules that the administration did at the last minute," he said. "It takes years to get through the regulatory process. If you’re working in an agency to do a rule, you’re going to generally try to figure out how to do that in four years."

He said if the problem is a lack of oversight and review by Congress, it doesn’t make sense to indiscriminately kill a swath of regulations in "one-fell swoop" without looking at each rule individually.

"It shows they’re following the dictates of special interest lobbyists who find it too expensive to protect drinking water, to protect air, to make sure employees are treated fairly and to protect reproductive rights," Slesinger said.

"Congress should absolutely be giving thoughtful deliberation to these rules," she said. "But if the solution is to just let executive agencies run amok and cement the president’s regulatory agenda, then that’s a bad solution for American families and businesses."

The House Rules Committee yesterday sent the "REINS Act," H.R. 26, to the floor with a rule that allows for an hour of general debate and additional time for

The measure could move to the floor as early as today.

Proponents argue it would increase accountability for major executive branch policy decisions and compel Congress to take more responsibility over agency actions. Critics maintain it would result in a complete paralysis of the regulatory system.

The committee approved debate on three amendments offered by Republicans and nine by Democrats.

Rep. Raúl Grijalva (D-Ariz.) offered an amendment that would require evaluation of greenhouse gas emission impacts associated with a rule and an analysis of the impacts on low-income communities. If a rule increases carbon dioxide emissions by a certain amount, it would be defined as a major rule.

Rep. David Cicilline (D-R.I) offered an amendment that would exempt any rule from being considered "major" that pertained to the protection of the public health or safety. Rep. John Conyers (D-Mich.) would have all rules that provide for reduction in the amount of lead in public drinking water be exempt from the legislation.

Rep. Bradley Byrne (R-Ala.) said the "REINS Act" would address the historically slow economic growth of the last eight years by freeing businesses to bring back jobs. He cited a reduction in the number of days red snapper fishing was permitted in his state.

Taking boats out of the water hurt the economy in an array of small but damaging ways, Byrne said.

"It affects people who sell ice and fuel to these boats," he said.

Rep. Liz Cheney (R-Wyo.), the daughter of former Vice President Dick Cheney who was elected to the House in November, said she sees regulations hurting coal miners in her state every day. She praised the "REINS Act" as a viable solution.

"I think this is exactly what we’re here to do," she said.

But Rep. Hank Johnson (D-Ga.) said the bill would seriously derail environmental and health protections put in place to protect citizens and workers.

He also cautioned that the bill could transgress the separation of powers laid out in the Constitution, a notion Goodlatte readily dismissed.

Rep. Ken Buck (R-Colo.) questioned whether the bill went far enough, given it only addresses regulations that cost $100 million or more. He cited the thousands of regulations that are not considered "major."

Goodlatte said Congress would need a more "streamlined" process to address other regulations since reviewing major rules would already add considerably to the year’s workload.

"You have to walk before you run," he said.

While conservatives are hopeful the "Midnight Rules Relief Act" and "REINS Act" will make it through the Senate, they’re not banking on it.

"The Senate is where things get more tricky," Harbin conceded.

Without the "Midnight Rules Relief Act," Republicans will have to prioritize which Obama regulations to include in a Congressional Review Act.

The CRA is a 20-year-old legislative tool that has seldom been used. It allows Congress to quickly review and nix new federal agency regulations. Once a rule is proposed, Congress has 60 days to disapprove it. The resolution must also be signed by the president (E&E Daily, Jan. 3).

Bill Kovacs, senior vice president for the environment, technology and regulatory affairs at the U.S. Chamber of Commerce and a regulatory reform supporter, said the CRA is tricky because it requires a lot of floor time.

"On the CRA, each one of those is entitled to 10 hours of debate in the Senate. So if you have five of them, you’ve taken up a week," he said. "That’s difficult because [the Obama administration was] pumping out rules like you pump gas; it’s going to be very hard for many of those rules to be reviewed."

Rep. Mark Meadows (R-N.C.), chairman of the conservative House Freedom Caucus, said in the coming days his group could finalize a list of as many as 300 regulations it would like to see blocked under the Congressional Review Act.

Meadows said Congress will have until mid-May to repeal the rules under the guidelines of the CRA.

House Majority Leader Kevin McCarthy (R-Calif.) told reporters this week that the House will begin blocking rules under the Congressional Review Act as soon as Jan. 30. He said no decisions have yet been made on what rules will move first, but likely rules on coal mining and methane emissions will be among the first to go.

"While we haven’t yet determined what needs to be repealed first, I expect to start with swift action on at least on the Stream Protection Rule and methane emissions standards, both of which are limits to our energy production," McCarthy said in a speech on the House floor.

The House passage of the "Midnight Rules Relief Act," with the "REINS Act" likely to follow, has many environmental and public health advocates nervous.

Harold Wimmer, national president and CEO of the American Lung Association, is urging members to reject the "REINS Act," calling it "a dangerous attack on public health protections."

In addition to delaying or stopping meaningful oversight of tobacco products, the "REINS Act" would block critical clean air protections, he said.

"The U.S. Environmental Protection Agency has a track record of cost-effectively saving lives and improving public health under the Clean Air Act. The REINS Act would block or delay critical clean air protections against deadly pollutants, as well as the pollution that causes climate change," Wimmer said in a statement.

Andrew Rosenberg, director of the Center for Science and Democracy at the Union for Concerned Scientists, called the "REINS Act" and the "Midnight Rules Relief Act" two "egregious" attacks on science-based safeguards.

"It’s very discouraging to see this Congress, in its first week, launching this attack on science-based policies. Americans didn’t vote to have public health and environmental protections gutted," he said. "They didn’t vote to give corporations yet another tool to nullify the laws that keep our homes, neighborhoods and workplaces safe. But that’s what these two bills would do."

Conversely, the industry-backed American Energy Alliance supported passage of the "Midnight Rules Relief Act" and is asking members to vote in favor of the "REINS Act," saying the measures would increase accountability and transparency in the federal regulatory process and roll back "overbearing" regulations. The group said it would consider the measure a "key vote" that would be used on a scorecard of lawmakers.

"The REINS Act would make America’s elected representatives more accountable for federal regulations. Rules such as the Clean Power Plan, Waters of the United States, and ozone regulations would be subject to review by Congress, not left to the whim of unelected bureaucrats," the Alliance wrote in a statement.