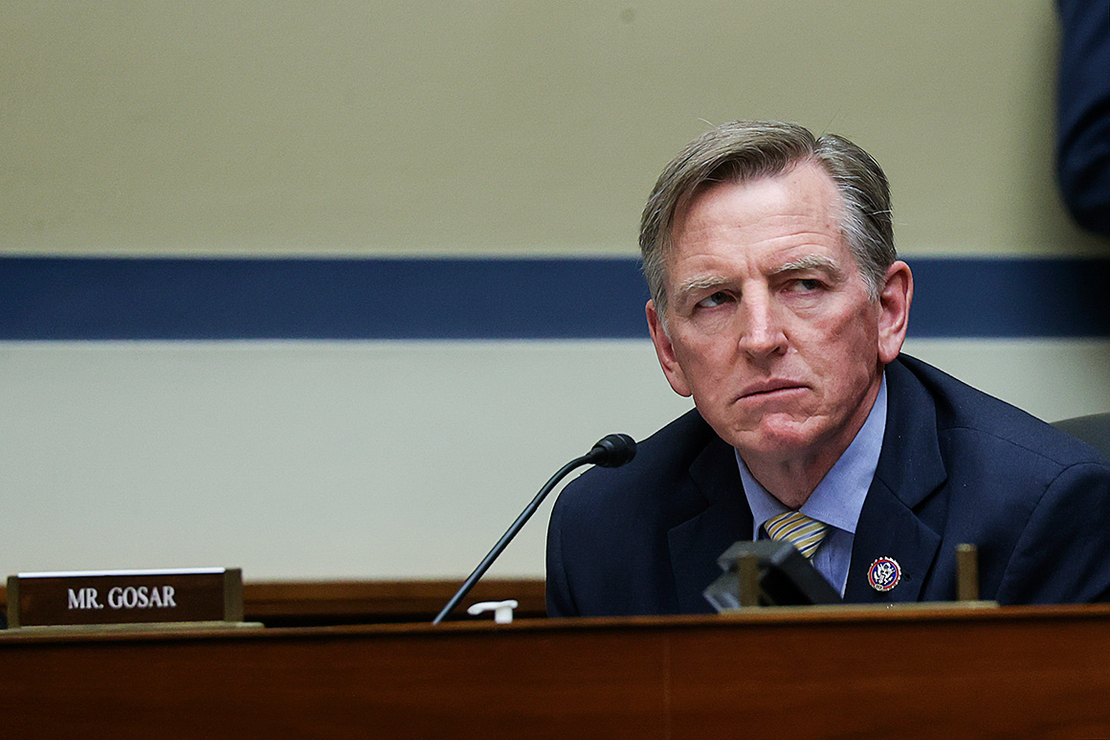 Rep. Paul Gosar (R-Ariz.) during a hearing this year of the House Oversight and Reform Committee. Jonathan Ernst/Getty Images

Rep. Paul Gosar will lose his seat on two committees he sits on, Natural Resources and Oversight and Reform, for posting a video depicting violence against a Democratic colleague.

The Arizona Republican’s ouster from Natural Resources, where he also serves as the ranking member of the Oversight and Investigations Subcommittee, is a major blow for the lawmaker.

Gosar has tied his policy credentials, and credibility back home, to his work on issues under the purview of the panel, focusing on energy dominance, critical minerals and public lands.

At the same time, Gosar’s removal is a victory for full committee Chair Raúl Grijalva (D-Ariz.), who urged Republicans nearly 11 months ago not to give Gosar committee assignments after the fellow Arizonan expressed sympathies for the violent rioters who stormed the U.S. Capitol on Jan. 6 (E&E Daily, Jan. 12).

Grijalva fought to ensure that Gosar would lose his position on Natural Resources over the video, which he posted to Twitter last week. The video featured an animated character intended to be Gosar appearing to kill, by sword, Rep. Alexandria Ocasio-Cortez (D-N.Y.). The video ended with the Gosar character leaping toward President Biden with multiple swords. Gosar eventually deleted the post following an uproar, though he later defended it as an extended metaphor against illegal immigration and open borders.

House Democratic leadership’s original strategy was to remove Gosar only from his seat on the Committee on Oversight and Reform — Ocasio-Cortez is a member of Oversight.

But that wasn’t sufficient for Grijalva, who told E&E News that Gosar’s “presence on [Natural Resources] is an equally unfit presence.”

Rep. Jared Huffman, who chairs the Natural Resources Subcommittee on Water, Oceans and Wildlife, also told E&E News he saw no difference between Gosar’s “hateful violent misconduct” and that of Rep. Marjorie Taylor Greene (R-Ga.), who lost both her committee assignments in February over comments she had made urging violence against lawmakers.

In the same resolution removing Gosar from his two committees, the House will also vote today to censure the congressman — a formal rebuke that registers the chamber’s “deep disapproval” of a member’s behavior that nonetheless falls short of grounds for expulsion.

Only 23 House members have been censured in the history of the legislative body. Immediately after the censure resolution is adopted, the subject must stand in the well of the House while the text of the resolution is read aloud.

The resolution is expected to be approved overwhelmingly by Democrats. Republican Reps. Liz Cheney of Wyoming and Adam Kinzinger of Illinois have said they will vote to censure Gosar, too, and some other GOP lawmakers might do so, as well.

Gosar won’t be kicked off Natural Resources, though, before the committee is due to convene at 10 a.m. to mark up a long list of bills, including H.R. 3326, the "Public Land Renewable Energy Development Act," or “PLREDA” (E&E Daily, Nov. 15).

This legislation — which would streamline the permitting for renewable energy projects while also creating a revenue-sharing system to allow host states to recoup money for local conservation efforts — has been a priority of Gosar’s for the previous four Congresses. He was removed as a lead sponsor earlier this year, however, after his Democratic partner, Rep. Mike Levin (D-Calif.), determined Gosar’s brand had become too politically toxic following the events of Jan. 6 (E&E Daily, May 24).

Republicans were outraged by the partisan slight and made clear this spring at a hearing on “PLREDA” that they were prepared to revolt against the traditionally bipartisan bill if Gosar remained sidelined.

Heading into this morning’s proceedings, however, the strategy appeared to be one of quiet resignation. Rebekah Hoshiko, a spokesperson for the Natural Resources Committee Republicans, said on Monday, before any decisions had been made on Gosar’s ouster, that members expected “PLREDA” to advance under a unanimous consent agreement. Ordinarily, Republicans might have forced a recorded vote on the legislation to prove a point.

Following the news of Gosar’s removal from the committee, Hoshiko did not respond last night to a request for comment from Natural Resources ranking member Bruce Westerman (R-Ark.).

Gosar’s office also did not provide a comment, though Gosar told E&E News earlier in the day that Democrats would decide his fate.