Got your COVID-19 vaccine? Thank a horseshoe crab 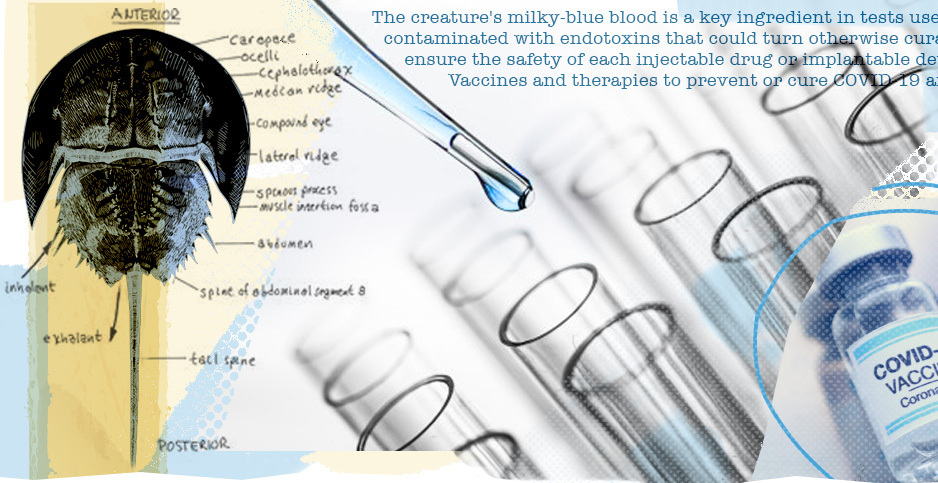 The biotech blitz to stop the spread of the coronavirus has conservationists worried about a little-known front-line worker: the horseshoe crab.

The creature’s milky-blue blood is a key ingredient in tests used to ensure drugs aren’t contaminated with endotoxins that could turn otherwise curative medicines deadly.

Hundreds of thousands of horseshoe crabs are harvested off the Atlantic coast annually to make limulus amebocyte lysate, or LAL, tests, thousands of which are required to ensure the safety of each injectable drug or implantable device brought to market. Vaccines and therapies to prevent or cure COVID-19 are no exception.

Some say that means American pharmaceutical regulators should step in and finally embrace a synthetic alternative to the LAL test and ensure horseshoe crabs and the shorebirds that rely on them aren’t doomed by the herculean effort to stop COVID-19.

It’s not just about the ecosystem. Backers of the synthetic endotoxin test say it’s foolhardy to rely on a single animal for such an important function.

"It is the regulators who are delaying this," says Jeak Ling Ding, a microbiologist at the National University of Singapore who developed the synthetic test. "But when the last horseshoe crab is bled and the rest have died off, what will you do?"

Found in the cellular walls of some bacteria, endotoxins can cause fevers, septic shock or even death when they enter the bloodstream. That means anything entering the body, be it an insulin injection or a pacemaker keeping a heart pumping, must first be tested for them.

Endotoxin tests must be run on not only drugs or implants, but anything they come in contact with, including the needles that inject them, the vials that contain them and the water used to produce them.

Until the 1970s, endotoxin tests were simple but time-consuming: Drugs and medical devices were first tested on rabbits, while researchers waited to see whether the animals would fall ill.

The discovery that horseshoe crab blood quickly clots around endotoxins was a game changer for the industry, and LAL tests relying on the blood became standard practice. The biomedical bleeding industry now makes more than $60 million annually.

"Any person who has ever had a shot that is alive today can thank a horseshoe crab," said Allen Burgenson, a global subject matter expert for testing solutions at Swiss biotech company Lonza, which manufactures both the LAL and synthetic endotoxin tests. "If you don’t think twice about going to CVS to get your flu shot, the horseshoe crab has made that possible."

Biomedical bleeding companies and conservationists have long been at odds over whether the pharmaceutical industry poses a significant risk to Atlantic coast horseshoe crabs.

Once caught in the ocean, the animals are brought to laboratories where scientists fold them in half to slip needles behind their shells and into their tubular hearts. The animals are drained of one-third of their blood before being returned to the ocean.

Biomedical bleeding companies like Lonza say the process does minimal harm to the horseshoe crabs, which are never bled two years in a row and are inspected for health before being bled.

"It’s just like the Red Cross — you can’t donate blood if you’re not in good health," Burgenson said.

They also claim that just 5% of horseshoe crabs die in the process, though conservationists have estimated death rates at closer to 30%.

The Atlantic States Marine Fisheries Commission’s Horseshoe Crab Management Board splits the difference, estimating that 15% die annually. That would mean that of the 740,000 horseshoe crabs harvested for bleeding in 2019, more than 100,000 died.

That number is dwarfed by the 500,000 horseshoe crabs harvested that year for bait in the whelk and eel fisheries.

Indeed, though the management board sets quotas on commercial bait harvests of horseshoe crabs, it has never limited the biomedical harvest, agreeing with industry arguments that bleeding is not a large enough threat to regulate.

That’s despite board regulations saying the body should consider limiting biomedical bleeding if mortality surpasses 57,000 annually — a threshold that has been exceeded for 12 of the past 13 years.

The lack of regulation concerns conservationists, many of whom have also fought against using horseshoe crabs for bait.

They also note that the biomedical harvest has skyrocketed in recent years, up almost 50% between 2019 and the prior year, and blame the decimation of Asian horseshoe crab populations, by both bleeding and bait industries, for putting even more pressure on the American variety.

That, in turn, could imperil the Atlantic coastal ecosystem, where horseshoe crabs emerge each spring to lay thousands of eggs on beaches. The eggs are a key source of food along the Atlantic flyway, with an estimated 425,000 birds, including endangered shorebirds like the red knot, converging on Delaware Bay each spring as they migrate north.

"There is a ripple effect across the ecosystem landscape," said David Mizrahi, vice president of research and monitoring at New Jersey Audubon. "Biomedical mortality isn’t 100%, but nonetheless there is an impact."

Conservationists and biomedical bleeding companies similarly disagree about how production and deployment of coronavirus vaccines and therapies could affect the crab.

John Dubczak, an executive director at LAL test producer Charles River Laboratories, says the race to develop COVID-19 vaccines will have an insignificant impact on the species.

Health officials estimate 5 billion doses of a vaccine will be needed to stop the virus’s spread. Dubczak said producing that many doses would require just 600,000 LAL tests to be performed — a number that "amounts to less than a single normal day’s production for the three LAL manufacturers in the United States."

But conservationists say the biomedical bleeding industry is underestimating the pandemic’s impact on horseshoe crabs, because it’s not just the final vaccines that must be tested for endotoxins but anything used to produce them — including water, vials and needles.

And while just two vaccines have been approved to fight the disease, there are nearly 200 other vaccines or therapies in development to fight against the coronavirus — all of which require endotoxin tests to prove their safety.

"I can only expect that the pressure on horseshoe crab populations will increase. It’s hard to imagine that the math would suggest otherwise," said Mizrahi. "But there’s no need for it, given that there is a synthetic alternative that doesn’t harm the environment."

The synthetic test, called recombinant Factor C (rFC), was made by cloning horseshoe crab DNA responsible for its blood’s clotting endotoxin response, and has been available since 2003.

Ding and her lab partner, Bow Ho, set out to find an alternative endotoxin test in the 1980s, when the prices of Asian LAL tests were climbing due to the decline of horseshoe crabs there.

Until 2016, Lonza was the only manufacturer of rFC. And some skeptical backers of the synthetic test argued that the company wasn’t doing enough to push for drug makers to adopt it. After all, as a producer of LAL tests, too, Lonza had seemingly little to gain.

But Burgenson said that those accusations are unfounded and that he struggled to convince pharmaceutical companies and regulators alike to embrace rFC when Lonza was the only company making it.

Drug companies, he said, rebuffed offers for Lonza to do all the validation work proving rFC was safe. Meanwhile, regulators questioned whether it was wise to allow an endotoxin test produced by just one company.

"I don’t know what more we could be expected to do," he said.

But with two rFC producers today, only one pharmaceutical company has actually brought drugs to market using the synthetic test.

Eli Lilly and Co. blazed the trail for rFC adoption, largely due to supply chain concerns about relying on horseshoe crabs.

The company realized that its dependence on LAL tests was unsustainable in 2013 while planning an insulin-manufacturing plant in China, where horseshoe crab populations were depleted.

Since then, Eli Lilly has "drawn a line in the sand," according to its endotoxin expert, Jay Bolden. New products manufactured since 2016 have all used rFC, rather than the LAL test, and Eli Lilly is in the process of switching all endotoxin testing to the synthetic method.

"For us, we thought it was worth it to take the extra effort to do it, so it was a proactive change for us instead of reacting to a problem down the road," said Bolden, who declined to share how much it cost to swap out endotoxin test equipment. "You have all this reliance on a single animal that is not doing too well. There is a better way to do it, is what it comes down to."

‘Fight against the world’

European regulators announced last summer that they would begin accepting drugs produced with rFC in 2021, and regulators in Japan and China are expected to follow suit.

While the Food and Drug Administration is charged with approving new drugs, it largely outsources its regulations regarding the manufacturing process to a nonprofit body called the U.S. Pharmacopeia.

The U.S. Pharmacopeia has flip-flopped over rFC. The group signaled last spring that it would issue standards to place the synthetic test on equal footing with the LAL test. But it backtracked in the fall, releasing draft guidance that required companies using rFC to show it is as effective as the LAL test by essentially using both when developing medicines.

The exact impact of the U.S. Pharmacopeia’s decision is unclear.

The FDA in 2012 issued its own guidance saying it would accept drugs produced using the rFC tests if companies supported those decisions with hefty data decisions. So far, only Eli Lilly has used that ability, with the FDA approving three of the company’s drugs — including a new COVID-19 therapy in November — that used the synthetic tests.

The FDA has also signaled that it would accept drugs produced under European regulations, potentially allowing more drugs produced using the synthetic tests this year. And at least one company is examining its options, with vaccine manufacturer Sanofi Pasteur publishing a paper this spring finding that rFC and LAL tests are equivalent.

But many believe the pharmaceutical industry at large will wait for the U.S. Pharmacopeia to act before adopting rFC.

Bolden said it’s "all about perception."

"We certainly blazed the trail and showed how to do it, but it takes extra work to validate your method compared to the LAL, and a lot of pharmaceutical companies aren’t going to rock the boat if they don’t have to."

Phillipe Gadal, a regulatory adviser with the French biotech company bioMérieux, which began producing rFC a few years ago, says the U.S. Pharmacopeia really sets standards globally, because the American drug market is so large.

"A pharma company might say, ‘Well, we want to go to rFC, but we want to wait for the U.S. Pharmacopeia,’" he said.

"With the FDA’s leadership amid the COVID-19 pandemic, there is an immediate opportunity to innovate and rapidly move away from the use of rabbits and horseshoe crabs to the use of rFC," it says.

The FDA has said it cannot decide on the petition.

Burgenson, who believes bioMérieux has been too aggressive in advocating for rFC, says he’s skeptical that the coronavirus is a convincing reason to move to the synthetic test.

"When we switched to crabs from rabbits, there was a clear business case for drugmakers because the rabbit tests were so time-consuming and expensive," he said. "The only real case to switch to rFC is if you don’t want to use animals in your endotoxin tests, and that’s not enough for industry to pressure the regulators."

But Gadal remains hopeful that the FDA and the U.S. Pharmacopeia will come around, noting the progress already made globally.

"I think you cannot fight against the world for too long," he said.

"Do I think that COVID-19 will be the thing that forces this decision? I really don’t know," she said. "But we need to move to rFC because of the longer-term challenges to horseshoe crabs, and whether coronavirus is what gets us there, to my mind, doesn’t really matter because we have to go there."