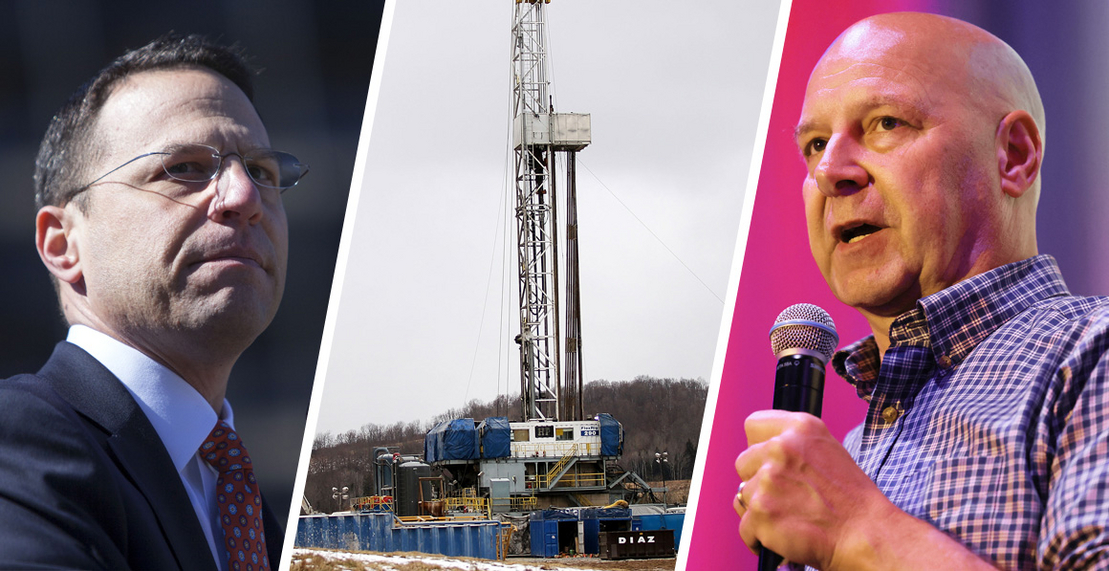 Pennsylvanians will elect a new governor this November for the first time in eight years — and their choice could shake up the state’s fossil-fuel-heavy energy sector and influence how quickly it shifts toward clean power.

The closely watched election will affect more than just Pennsylvania, which holds an outsized role in fossil fuel production and electric power. The state is the second-largest producer of natural gas and the third-largest producer of coal, and it exported more electricity beyond its borders than any other state last year.

Democratic nominee Josh Shapiro and Republican nominee Doug Mastriano both say they want Pennsylvania to remain an energy powerhouse. But their platforms have stark contrasts. Shapiro wants to expand regulations on drilling and promote renewable energy. Mastriano has pledged to boost the state’s fossil fuel industries, including by allowing drilling in state parks and forests.

Energy policy will be “a very salient issue in this race,” said Christopher Borick, a professor of political science at Muhlenberg College. “There’s real, clear distinctions between the candidates on the topic, and it’s an important topic right now in the broader economic and public health realm.”

In last month’s primary election, Mastriano — who had secured a lucrative endorsement from former President Donald Trump — won 44 percent of the vote, more than twice as much as any other candidate in the crowded Republican field. The retired U.S. Army colonel and two-term state senator supported Trump’s debunked claims about election fraud and has called climate change “fake science.”

Shapiro has served in state and local politics in some capacity since 2005. In his current role as attorney general, he’s gone after oil and gas companies accused of violating the law.

On the campaign trail, Shapiro has declined to commit to keeping Pennsylvania in the Regional Greenhouse Gas Initiative, a multi-state carbon trading program targeting the electric power sector. Current Gov. Tom Wolf (D) successfully pushed for the state’s RGGI membership — and some environmental advocates view it as the most significant step the state has ever taken to address climate change.

Because of his noncommittal position on RGGI, most don’t view Shapiro as a “big climate advocate,” said Steve Harvey, a Philadelphia-based attorney who’s representing scientists and other backers of RGGI in ongoing litigation over the program.

“Pennsylvania is an in-between state: it’s not the Deep South, but it’s not Massachusetts,” Harvey said. “[Shapiro] will continue to play a middle ground here, I would guess, as long as he possibly can.”

It’s also unclear how much Shapiro would be able to get done on energy and environmental issues, as he would likely face a Pennsylvania General Assembly controlled by Republicans. Mastriano, meanwhile, is expected to be in lockstep with the Legislature on energy issues if he’s elected.

Climate and public health advocates say they hope that Shapiro would establish new policies to safeguard communities from oil and gas activities, particularly fracking. As attorney general, he issued a comprehensive report in 2020 that found that the state had “failed to protect citizens” during the shale gas boom. It recommended a series of reforms, including prohibiting drilling within 2,500 feet of any occupied building and allowing the attorney general to pursue criminal charges for environmental crimes.

By contrast, Republican lawmakers and industry groups say oversight of oil and gas activities is already too onerous. With Mastriano in charge, it’s likely that the state would work to speed up the permitting process, open state-owned lands to drilling and roll back broader environmental regulations.

The oil and gas industry has supported many of those proposals.

“It is imperative that the next administration work to address chronic permitting delays and regulatory overreach that has held back job development, capital investment, expanded production and utilization, and the continued evolution of natural gas as a valuable energy source and feedstock,” David Callahan, president of the Marcellus Shale Coalition, said in a statement on the election.

An uncertain future for RGGI

In April, Pennsylvania officially became the 12th state — and the first major producer of fossil fuels — to join RGGI, which is aimed at reducing greenhouse gas emissions from power plants.

Initiated through a 2019 executive order from Wolf, Pennsylvania’s participation in RGGI has faced fierce objections from Republicans in Harrisburg. The initiative remains one of the most salient energy issues in Pennsylvania.

“We’re talking about one of our big petrol states that’s considering this. It is really quite remarkable,” said Barry Rabe, a professor of public policy at the University of Michigan. “I don’t think we’re going to see New Mexico, Texas, or many other major fossil fuel states even get close to consideration of a carbon pricing regime like this.”

In 2020, Pennsylvania generated about 53 percent of its electricity from natural gas, while over 30 percent of power came from nuclear energy, 12 percent came from coal and the rest came from other sources, including renewable energy, according to the U.S. Energy Information Administration.

Mastriano has pledged to pull the state out of RGGI “on day one” if he’s elected, while Shapiro has said he would consult “with workers and affected communities” before deciding how to proceed on the issue. Removing Pennsylvania from RGGI would require a regulatory process that could take months or over a year, according to some legal experts.

Assuming the state participates in the initiative for at least a year, the next governor will play a major role in determining how the revenue raised through the program is used.

Under RGGI, power plant owners in participating states are required to purchase allowances during quarterly auctions for every ton of carbon dioxide they emit. The proceeds from those auctions are sent back to the states, which can reinvest them in clean energy, energy efficiency programs, flood control measures or other initiatives.

“The big question for the next governor would be, ‘What do we want to do with the investment piece?” said Rob Altenburg, senior director for energy and climate at PennFuture, an environmental group.

It’s unclear how much revenue RGGI will bring into Pennsylvania. A spokesperson for the Pennsylvania Department of Environmental Protection said the office “cannot predict” the auction prices nor the number of allowances that will be allotted to Pennsylvania power plants.

Still, the price of allowances over the last several RGGI auctions has been steadily rising, generating more revenue for participating states. While legal challenges to block the state from joining RGGI are still pending, Pennsylvania power plants are scheduled to participate in auctions beginning this September.

For now, Republican critics are attempting to frame Shapiro’s noncommittal position on RGGI as a political ploy to win votes and a sign of a lack of conviction. Once elected, he’s all but certain to support the initiative, critics say.

“You have areas of Pennsylvania that are very dependent on energy. They, in turn, need to be asking Shapiro what his policies will be on protecting jobs in Pennsylvania,” said Dave Ball, chair of the Washington County Republican Party. “If he intends to kill the fossil fuel industry, what’s that going to do for them?”

The limited power of the veto pen

Though he has been noncommittal on RGGI, Shapiro has said that he would seek to update a 2004 law known as the Alternative Energy Portfolio Standards Act if he’s elected governor. He aims to bump up the current target of 8 percent renewable or clean electricity by 2030 to 30 percent, a spokesperson said.

However, that would require the approval of the General Assembly. If the past eight years are any indication, getting legislative approval for such a policy could be a losing battle.

“Discussions about expanding renewables have been underway for a long time, but how you could accomplish that is unclear,” said Rabe of the University of Michigan. “That might make continued engagement in RGGI more attractive.”

Harrisburg has been marked by partisan gridlock since Wolf was elected in 2014, as Republicans have controlled both the House of Representatives and the Senate. In the upcoming November elections, Democrats would need to flip at least five seats in the state Senate and at least 12 seats in the state House to regain control of the General Assembly, an unlikely outcome in what’s expected to be a tough year for Democrats, political analysts say.

For that reason, the veto pen would be one of the most powerful tools of a Shapiro administration. Throughout Wolf’s two terms, the Democrat has struck down various pro-fossil-fuel bills, along with legislation that would have effectively stripped the Department of Environmental Protection’s ability to regulate carbon emissions through RGGI.

Mastriano, meanwhile, has supported those vetoed bills. More recently, he introduced the PA Energy Independence Act, which would lift an existing moratorium on leases for oil and gas development in state parks and forests. The bill would also establish a cap on permitting fees for fracking wells that could only be changed through an act by the General Assembly.

The bill would also limit reviews of “natural gas or coal permits” to 45 days. If the Department of Environmental Protection failed to act on a permit within that time frame, the permit would be “deemed approved” so long as it met certain conditions.

The Mastriano campaign could not be reached for comment. But Senate Majority Leader Kim Ward said that if Mastriano were elected, the General Assembly would work to pull back measures enacted by Wolf that are “killing energy.”

“We need to make sure that these energy businesses that want to operate and employ people are able to do that,” Ward said. “They regulate just everything. I find it to be unacceptable.”

A ‘political reality’ for Republicans

A Republican trifecta in Pennsylvania — with Mastriano in the executive office and Republicans controlling the state House and Senate — could result not only in the rolling back of regulations, but also in new limits on municipalities’ ability to establish climate policies, said Alex Bomstein, director of litigation at the Clean Air Council, an environmental nonprofit.

For example, a proposed “energy choice” bill preventing municipalities “from banning access to certain utilities, like natural gas,” would likely be signed into law under Mastriano. Similar laws prohibiting cities from restricting oil and gas heating have been enacted in at least 20 Republican-controlled states (Energywire, May 3).

But one step a Shapiro administration might take is address a potential loophole in the state’s environmental regulations on oil and gas, Bomstein said. In his office’s 2020 report on the shale gas industry, Shapiro found that criminal laws relating to environmental crimes “need improvement.”

“It would be welcome to have changes so that people who break the law can actually face consequences. That’s one of the biggest loopholes in the regulatory scheme: People just ignore the law and pay fines because it’s cheaper for them to do that than to comply,” Bomstein said.

Five months ahead of the election, Shapiro has a few political advantages over Mastriano. For one, he has been running unopposed — and raising millions in campaign contributions — since last fall, while Mastriano was embroiled in a competitive, crowded primary race until last month.

After Mastriano secured the nomination over other candidates seen as less conservative, Larry Sabato, director of the Center for Politics at the University of Virginia, updated his prediction for the gubernatorial race in Pennsylvania from “toss up” to “leans D.”

Ball of the Washington County Republican Party said the election’s result will partly depend on how effectively Pennsylvania Republicans coalesce around Mastriano. As of 2020, there were more than 600,000 more registered Democrats than Republicans in the state, according to statistics from the Pennsylvania Department of State.

“It’s going to take every Republican to come out and vote, plus gathering independents and some of the swing Democrats, to defeat Shapiro. That’s a political reality,” Ball said.